The relatively warm and low-lying plains of Akagera comprise savannah, woodland, wetland and a dozen lakes. In partnership with African Parks, we aim to transform the National Park into a world-class location to experience a safari.

The largely open expanse is ideal for game viewing, and we are taking steps to ensure the Big Five roam the park in greater numbers over the course of time.

Since 2010 we have cut poaching to an all time low, with the introduction of a helicopter, a canine unit and rhino trackers.

A family of lions from South Africa is settling in well, and breeding successfully, and 18 eastern black rhinos have also been reintroduced.

A boat trip on Lake Ihema is also a highlight of any visit to Akagera, with its large pods of hippos, Nile crocodiles and abundant waterbirds on the island in the middle of the lake.

The only way to explore the park is by vehicle, whether through a tour operator or self drive. The National Park also has a vehicle to hire, with individual spaces available on night drives.

It is recommended to take up the services of a guide, which can be booked through the park.

Sleeping within the park is possible, at various lodges, a bush camp in the north at select periods, or camping in specific sites. 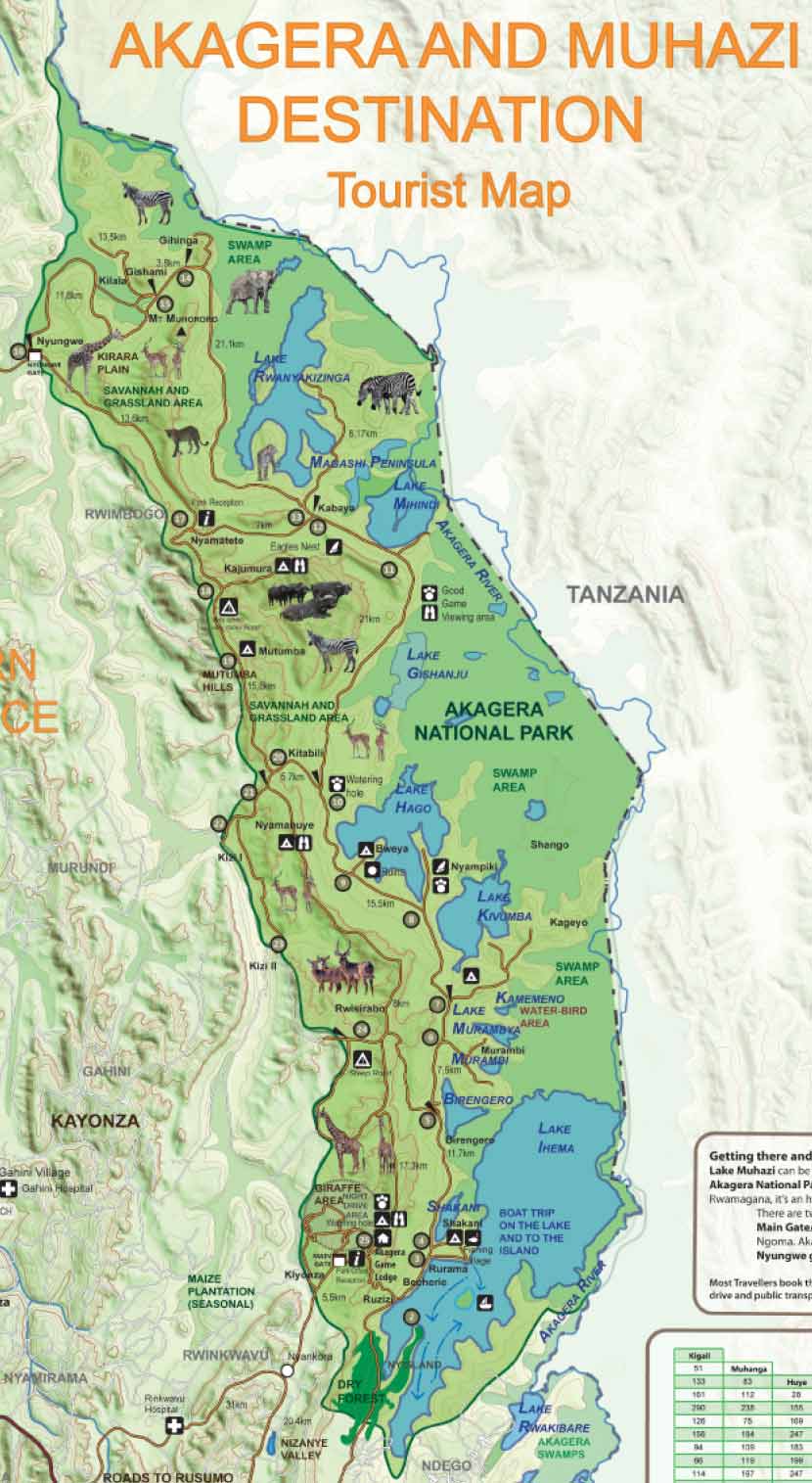 Great wildlife viewing with the Big Five present
Excellent birding includes many rarities, raptors and waterbirds
Off-the-beaten-track destination
Beautiful scenery with several forest-fringed lakes
Night drives and boat trips available, along with the usual game drives
Limited accommodation in the park
Big cats are relatively difficult to spot
Tsetse flies can be a problem in the park

Akagera has recently become a Big Five destination but some of the main species can be difficult to find. Buffalo is common and you might see elephant as well. The newly introduced lions are remarkably relaxed, but sightings are hit-and-miss. Black rhino is the most recent addition, but they are very shy. Leopards can be spotted on night drives.

There are a lot of plains animals, including Burchell's zebra and Masai giraffe. Akagera is also home to 11 antelope species. The most common throughout the park is the gracious impala, but of particular interest are the big herds of topi. Defassa waterbuck are regularly seen around the lakes and bushbuck is a widespread resident in the woodland areas. The rare sitatunga antelope is known to reside in the swamps.

With around 480 species recorded, Akagera offers excellent birding. Of the 480 species, 100 birds are not found in any other protected area in Rwanda. Akagera is Rwanda’s second most important birding site after Nyungwe, and the two parks complement each other perfectly – very few birds recorded in Rwanda can’t be found in either park. Akagera is a good place to see a variety of raptors, including bateleur, white-backed and Ruppell’s griffon vultures, and brown snake eagle.

Akagera can be visited throughout the year. The Dry season (June to September) is the prime time for watching wildlife in the park. Animals are easier to spot because the bush thins out and wildlife concentrates around the lakes.

Best time of year for spotting wildlife
Skies are bright, with almost no rain
Malaria risk subsides as there are less mosquitos
Conditions are dry and dusty, and the sky can be hazy

The climate in Akagera is usually moderate to warm. Average temperatures are quite uniform throughout the year. It is advised to take warm clothing for early morning or night game drives. Akagera's Dry season is from June to September. There are two Wet seasons. The ‘short rains’ are from October to December and the ‘long rains’ are from March to May.

There is very little rain during these months. Vegetation thins out and animals are attracted to the lakes and wetland areas in the park. Temperatures are warm and pleasant.

June, July & August – Afternoon temperatures are usually around 27°C/81°F. Most days are sunny with a fine, clear sky. It gets cold at night, with minimum temperatures around 14°C/57°F. It’s usually cold in the early morning as well.
September – Early September is still dry, but sometime this month the short rains might start. Temperatures remain the same.

As in the Dry season, temperatures are warm. Afternoon temperatures are usually around 26°C/79°F while nighttime temperatures hover around 15°C/59°F. During the Wet season it rarely rains all day, but afternoon thundershowers can be expected. There is a drier spell between the short and long rains.

October, November & December – ‘Short rains’ – The rains start in October (or September). It is rare for it to rain throughout the day. Afternoon showers are common. Daytime temperatures are usually around 26°C/79°F while night and early morning are about 15°C/59°F.
January & February – This tends to be a dry spell between the short and long rains. The exact timing is unpredictable.
March, April & May – ‘Long rains’ – These are the wettest months. It tends to rain most days, although seldom for the whole day. It is often cloudy. The average temperatures remain about the same.

Most people come to Rwanda to track gorillas in Volcanoes National Park. Kigali International Airport (KGL), about 10km/6mi from the capital, Kigali, will be the entry point into the country.

Akagera NP is located in the east of the country, 120km/75mi from Kigali. The drive takes about 2½ hours.

Akagera is commonly visited as part of a 4x4 tour of the country, including a driver-guide.

There are no domestic flights to Akagera, but Akagera Aviation offers charter helicopter transfers to anywhere in the country. The flight from Kigali to Akagera NP takes 22 minutes. 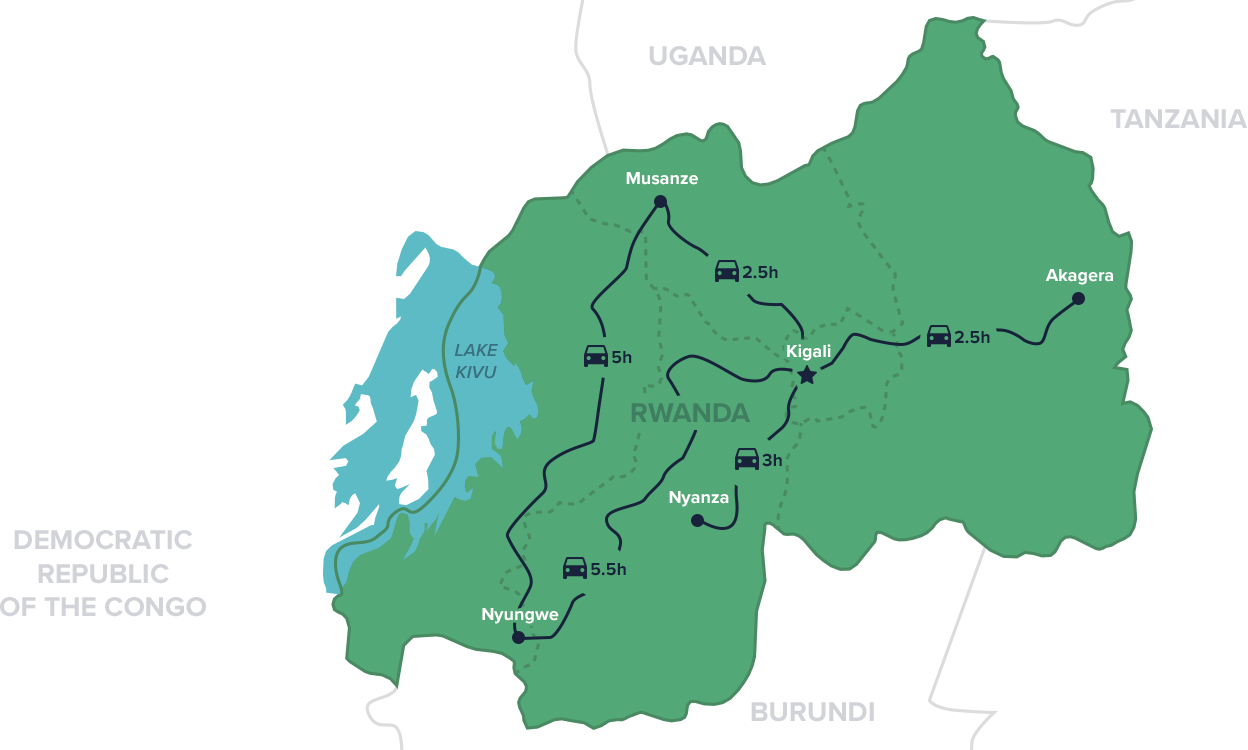