Arabuko Sokoke protects the largest remaining tract of coastal forest in East Africa. The reserve is mainly a bird-watching destination, and several endemics and near-endemics can be found here. The forest is a magical place to spend a couple of hours – and a welcome refuge from the coastal heat – but don’t expect to see any of the big safari animals.

Arabuko Sokoke is not primarily a wildlife-viewing destination. Buffalo, elephant and leopard are present, but sightings are rare. Blue, red and common duikers can sometimes be spotted. The forest is home to 250 different butterfly species, of which four occur nowhere else in the world. Try Kipepeo Butterfly Farm to see these dazzling creatures.

Aside from several birding specials and endemics, the forest is home to three mammal endemics as well. Unfortunately, they are even more difficult to spot than the birding specials. This is the last stronghold of the golden-rumped elephant shrew. The forest is also the only place to see Ader’s duiker and Sokoke bushy-tailed mongoose.

More than 230 bird species have been recorded in Arabuko Sokoke. The area is well-known for several globally threatened species, including Sokoke scops owl and Clarke’s weaver. Other sought after species that can be seen here include Sokoke pipit, Amani sunbird and chestnut-fronted helmet-shrike. As always, forests don’t offer easy bird-watching, but the rewards of interesting species are plentiful here. Even non-birders will enjoy some of the more noticeable forest avifauna, including the trumpeter and silvery-cheeked hornbill.

It is possible to plan a trip to Arabuko Sokoke any time of year. However, heavy rain might interfere with drives and forest hikes. There is rain along the coast throughout the year, but the less than ideal months – due to peaks in rainfall – are November, April and May.

Mostly sunny and not much rain
The park never gets busy
Roads are in good condition
Resort hotels, which can be used as a base, get very busy
Scenery is drier and there might be haze in the sky making views harder to appreciate

April to May & October to November – Wet Season

Arabuko Sokoke has a hot and humid coastal climate, cooled by strong breezes. Average afternoon temperatures are around 30°C/86°F. Although it cools down a bit, nighttime is still warm with temperatures of 21°C/70°F. It rains throughout the year, but rain peaks during the ‘short rains’ from October to November, and during the long rains from ‘April to May’.

Dry Season – December to March and June to September

December, January, February & March – This is a drier spell between the short and long rains. The exact timing of the dry period is unpredictable and it can still rain a bit. These are the hottest months with average temperatures of 31°C/88°F.
June, July, August & September – It is mostly sunny. It can still rain some days, but this is the main dry season. These are the coolest months with daytime temperatures of around 28°C/82°F

Wet Season – April to May and October to November

Summer has more comfortable temperatures and a bit more rainfall. Some days might be cloudy and it might drizzle for a day, but it is mostly sunny.
April & May – ‘Long rains’: These are the wettest months. There are many overcast days and it can rain all day. Afternoon storms are more common though. Road conditions might deteriorate. Daytime temperatures drop slightly to 30°C/86°F.
October & November – ‘Short rains’: The rain increases in October and peaks in November. It rains less than during the long rains, but November can be very wet. Afternoon storms are common, and there is a bit of sunshine around as well.

Arabuko Sokoke forest is located 120km/74mi north of Mombasa and 560km/347mi from Nairobi.

Arabuko Sokoke is an easy daytrip from the popular beach resorts at Malindi and Watamu. Daytrips to Arabuko Sokoke are offered by most hotels in the area, or you can hire a car as well.

Most people fly from Europe or North America into Nairobi as this is the biggest transport hub and there is a lot of choice for tickets. Jomo Kenyatta International Airport (NBO) is located 15km/9mi southeast of Nairobi. Kenya’s second international airport is Moi International Airport (MBA) located 9km/6mi west of Mombasa. From either airport you can take a domestic flight to Malindi, which can be your base for visiting Arabuko Sokoke. 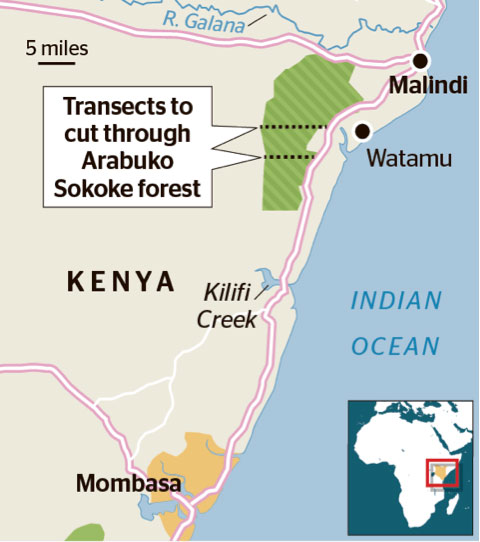