Bangweulu Wetlands is a unique wilderness destination. This massive wetland area is difficult to explore and very seasonal, but it is home to the very localized black lechwe. Thousands of these semi-aquatic antelope can be seen wading through the water. Aside from the lechwe, the park is mainly a birding destination with the rare, sought-after shoebill stork being the main attraction. The wetlands are also home to many small communities, who are benefitting from being involved in local conservation programs.

Home to the endemic black lechwe
Community owned protected wetland
One of Africa's best sites to see the shoebill stork
Offers a mix of game drives, walking safaris and canoe trips
Cycling tours available
Little-visited off-the-beaten track destination
Limited accommodation options; Shoebill Island Camp has closed for renovations
Home to many fishing villages, taking away some of the wilderness appeal
Getting to the park is expensive and difficult

The wetlands' main attraction is the thousands of endemic black lechwe. Sitatunga also loves this habitat, but they are shy and rarely seen. Elephant and buffalo can sometimes be spotted. Predator sightings are rare, but spotted hyena and jackal are often heard at night. The water channels are home to many hippo and crocodile lurking in the reeds.

The park is known for its black lechwe, but some other unusual antelope species are found here as well. The fastest of all antelope is the tsessebe and hundreds of this uncommon species can be seen on the grassland, fringing the floodplains. Pairs of dainty oribi are particularly common as well.

The wetlands is an amazing birding destination with over 400 species recorded. Many marsh specials can be seen here, and the star attraction is the sought-after shoebill stork. This is one of the easiest places in Africa to see this prehistoric-looking bird. The ‘shoebill guard program’, employs local fishermen to monitor nests. When floodwaters are high, from December to March, the area is an important stopover-feeding place for migrating birds.

The best time to see the amazing herds of rare black lechwe in Bangweulu is in June and July when water levels have receded, and grass attracts the grazers. May is the best time to find the shoebill stork. The middle of the Wet season (from December to April) is best for general bird watching, but conditions are difficult. At this time, there are many insects, it rains a lot, and water levels are high so November might be a better compromise.

The first rain (in November) brings new grass attracting the lechwe and other grazers
Water levels are highest in March and April, making it a wetland paradise
Scenery is green and fresh
Best birding time as migrants are present
Game drives aren’t possible from about December to April, only canoe trips
Very hot and humid
Many insects and mosquitoes
Malaria is a bigger concern than in the Dry season

Being in the tropics, Bangweulu Wetlands has a warm climate with a Wet and Dry season. The average temperature is uniform throughout the year, with a notable increase in temperature in October, before the rains. Nights are cool to cold in the Dry season months, from May to August.

There is almost no rain at all in the Dry season. It is warm during the day, but cool at night. The water levels recede, making game drives easier.

May – This is the beginning of the Dry season. Rain is minimal, and the water level starts to recede. This is the best time to find shoebills.
June & July – The rain has stopped completely, and the floodplains are drying out. These are the coolest months with daytime temperatures around 24°C/75°F. It gets cold at night, with average temperatures of around 10°C/50°F. Warm clothing for early morning drives is essential.
August & September – The floodplains are getting even drier. It is warming up, and September has an average daytime temperature of 29°C/84°F. Mornings are less chilly. Shoebills have retreated into inaccessible, permanent wetlands.
October – Temperatures keep increasing to an average of 31°C/88°F. Mornings are lovely, with temperatures around 17°C/63°F. The land is now dusty and dry. The first rain usually falls this month, but the exact timing is unpredictable.

This is the warm, Wet season. Water levels rise, and game drives become difficult. The lechwe have retreated deep into the wetlands. Afternoon showers are common, and thunderstorms are often spectacular. The sky is clear, and the bush is lush. This is the best time for bird watching.

November – The rain (usually beginning in October or November) is a relief because the bush is extremely dry. It is very hot and humid. The average daytime temperature is 29°C/84°F. It doesn’t rain every day, and it mostly comes in afternoon thunderstorms.
December, January, February & March – The wettest months bring rain most days. Daytime temperatures average 27°C/81°F, while night and early morning temperatures average 17°C/63°F. These are the best months for birding, and shoebills arrive at the end of February.
April – This is a lovely month, as the rain is winding down, but everything is lush and green.

Bangweulu isn’t included on many tourist itineraries and getting here isn’t very straightforward – the easiest way is by chartered plane. There are two airstrips in the area.

It is possible to drive to the park, and some specialized operators can set up a mobile trip for you as well. If you are driving yourself, you need to be fully self-sufficient with a high-clearance 4x4. In the Wet season, you’ll have to hire a boat for the last stretch to the camp.

Zambia's main airport is Kenneth Kaunda International Airport (LUN), located 14km/9mi from the capital, Lusaka – it is through this airport that most international visitors will arrive in the country. 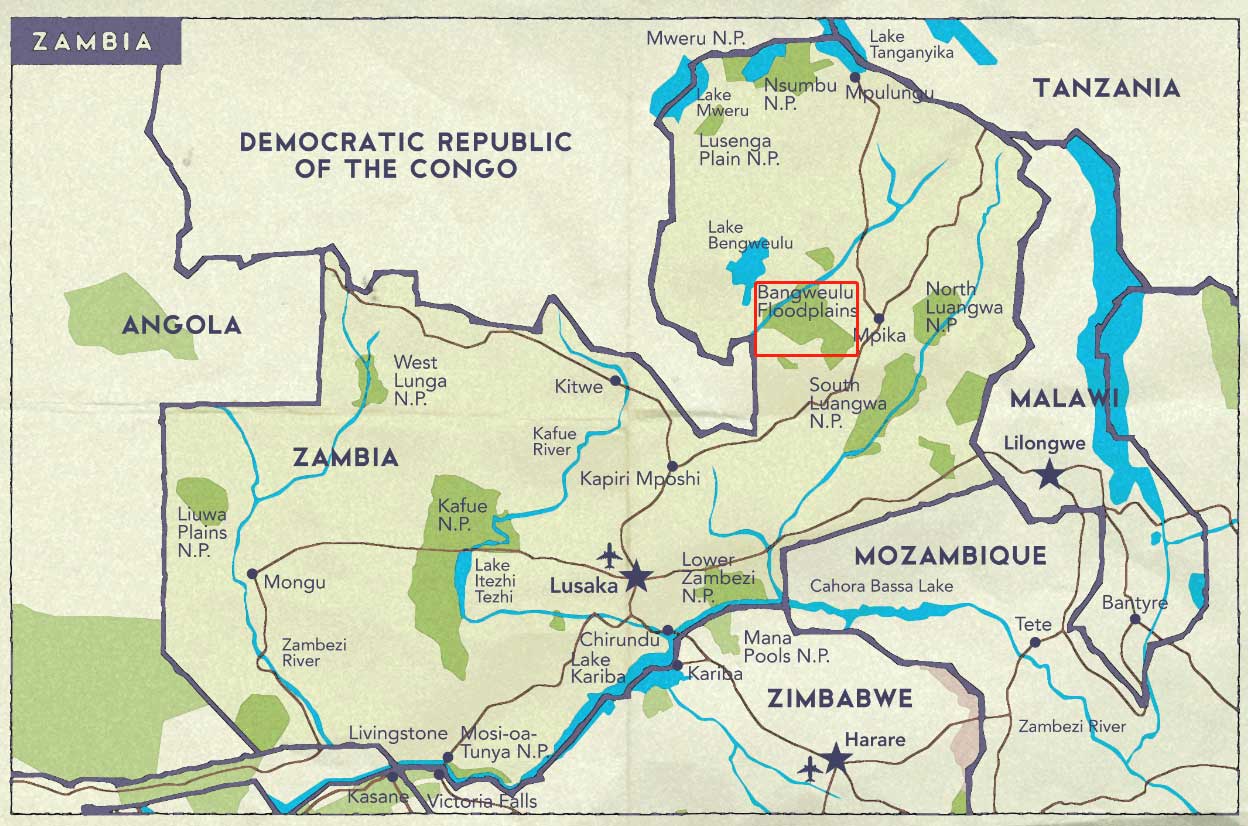