Although Chizarira has four of the Big Five (rhino is missing), animal densities aren’t huge. The terrain is excellent for leopard, and there is a good variety of herbivore. Its main attraction is its enormous wilderness appeal. Walking safaris are a big part of the experience. 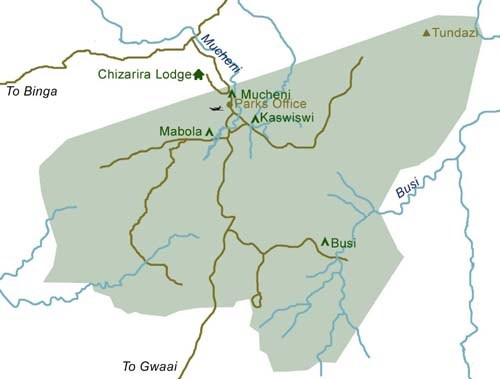 Good general wildlife and four of the Big Five are present
Walking safaris are excellent
Beautiful, rugged scenery
Remote and rarely visited
There is no accommodation available in or near the park, only camping
Poaching is a problem, and black rhino has become extinct locally
Both access roads and game drive-tracks are difficult year-round

There is a good variety of wildlife in the park, but animal densities are rather low. Animals tend to be skittish due to poaching issues. Chizarira is home to elephant and buffalo. The park was once a stronghold for black rhino, but they have become locally extinct. Zebra, greater kudu, waterbuck, bushbuck and impala are all quite common. Roan antelope and grysbok are rare but might be spotted as well. Lion and spotted hyena are around but are more often heard than seen.

The rocky terrain is excellent for animals that thrive in that kind of environment, such as klipspringer – often found standing like statues on balancing rocks. Rock hyrax are very common but usually noticeable only while scurrying away as one of the many raptors, such as black eagle, passes overhead. Leopard also love this habitat and sightings of these elusive predators are remarkably frequent.

Chizarira is a bird watcher’s paradise and has over 360 species on its checklist. About 70% of Zimbabwe’s birds can be found within the different habitats of the park. The rare Taita falcon is often spotted roosting on the cliffs. Other birds of prey to look out for are the Lanner and Peregrine falcon, and the majestic Verreaux’s eagle. The Angola pitta, one of Africa’s most sought after birds, can be found hopping among the undergrowth around the entrance of the park.

The middle and end of the Dry season (July to October) is best for watching wildlife in Chizarira National Park. Wildlife is more easily seen at this time because the vegetation is thinner and animals gather at water sources. Roads can become impassable during the Wet season.

Animals are easier to spot because they gather around rivers and waterholes and the vegetation is thinner
Rain is rare – skies are clear and sunny
The number of mosquitoes decreases, making the malaria risk much less
It isn't humid, except for October, which makes the heat much easier to tolerate
Dust and dryness is common
It gets cold at night; warm clothes are a necessity for morning game drives

Chizarira enjoys a mild, temperate climate. The warmest months are September to March, and the coldest are May to August. The altitude in Chizarira varies greatly from 704 to 1,240m (2,310 to 4,068ft). For every 1,000m you travel upward, temperatures fall approximately 6.5C (or 3.5°F per 1,000ft), so it is possible to experience a variety of climates inside the park.

The Dry season (April to October) is a time of fine, sunny skies. The Wet season is from November to March. Rains tend to come in heavy, afternoon showers and are often followed by sunshine. Alternately, it can drizzle for several days in a row. Winter and summer occur at opposite times as in Europe and North America and correspond to the Dry and Wet season.

April – This is the end of the Wet season. There might still be a bit of rain, but it is becoming more and more sporadic. It is cooling down now, especially at night.
May, June, July & August – These are the coldest winter months, although it starts to warm up a bit in August. It is almost completely dry, and the vegetation and air just get drier as winter goes on. Daytime temperatures are around 26°C/79°F, but at night and in the early morning the temperature is around 10°C/50°F.
September & October – These months are still dry, but the first rains usually arrive by late October. This comes as a great relief after months of dryness. It gets hot during the day with temperatures reaching over 31°C/88°F and morning game drives are less cold. October is the hottest month, and temperatures up to 40°C/104°F are common in the lower-lying areas of the park.

November – The rains have really started now, although it won’t rain every day.
December, January & February – These are the wettest months. It will rain most days, but seldom for the whole day. Rains are usually afternoon showers, followed by hours of sunshine. But it can also drizzle continuously for a couple of days. Daytime temperatures average 28°C/82°F, while night and early morning averages 19°C/66°F.
March – The rains will slow down, as this is the end of the Wet season. Temperatures average between 29°C/84°F and 17°C/63°F during the day and night respectively.

Chizarira National Park is very remote and difficult to access. It is located in the northwest of the country, just south of Lake Kariba and about 200km/124mi from Victoria Falls. It is at least a four to five-hour drive. The condition of the access roads is often very bad, and a good 4WD is essential. In the Dry season, the road is often a 4WD challenge, with indistinct tracks, washed out river beds and deep ruts, while in the Wet season, the road often becomes impassable.
Your main point of entry into Zimbabwe is Victoria Falls Airport (VFA) located near the town Victoria Falls. Normally, your local tour operator will pick you up at the airport and arrange your further transportation throughout the country as part of your tour. 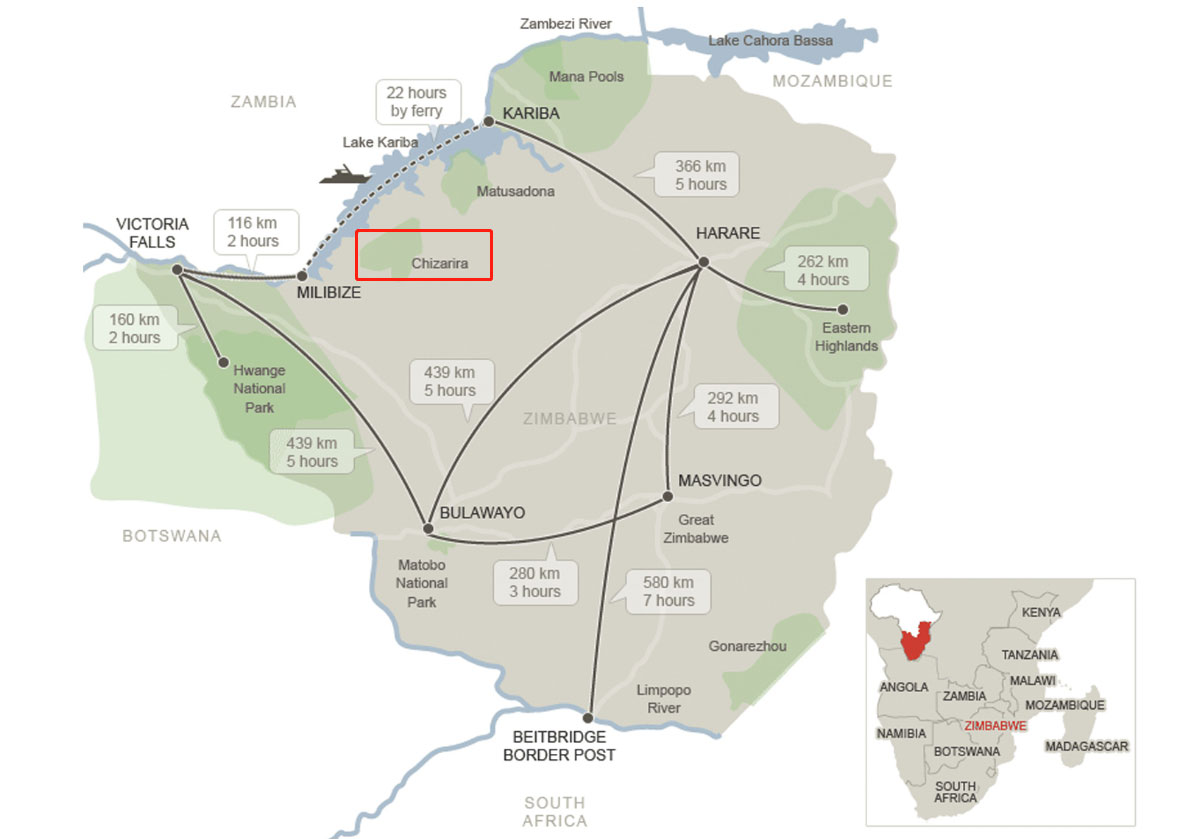