This huge wilderness is one of Africa’s last remaining unofficial wildlife areas. The area is thinly populated and animals still roam around freely. The main attraction is the stunning desert environment. Wildlife is sparse and desert elephants and black rhinos are what most people come to see. The region also harbors several important rock art sites. 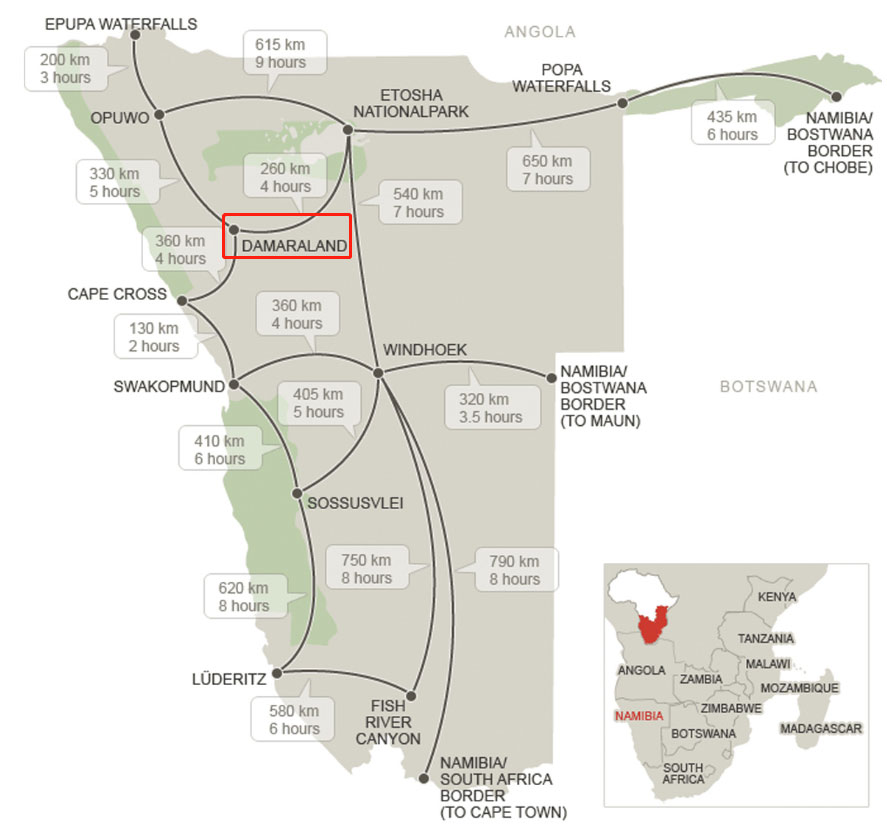 Damaraland is not a classic wildlife destination; wildlife is sparse and the main attraction is the arid desert environment. Desert elephant and black rhino are the animals most people come to see, but other wildlife includes gemsbok, greater kudu, eland and springbok. Giraffe and Hartmann’s mountain zebra are nomadic visitors to the area.

The Save the Rhino Trust, in cooperation with Desert Rhino Camp, has set up a program for black rhino tracking to protect the only truly free-roaming (outside national parks and reserves) black rhino left in the world. Rare desert elephant are the other prime species, while a pride of desert-adapted lions is quite a prize if you see them. The endemic black-faced impala and Damara dik-dik can also be found in the area.

Damaraland has more than 200 bird species recorded, including several arid-country specials. The area is rich in near-endemics, which are sought after because of their restricted range. These include violet wood-hoopoe, Hartlaub’s francolin, Rüppel’s parrot, Monteiro’s hornbill, Carp’s tit, bare-cheeked babbler, rockrunner and white-tailed shrike. Raptors are also well represented and the majestic Verreaux’s eagle can sometimes be seen soaring above the rocky cliffs. Migratory birds are present from November to April.

Water is hard to come by during the drought of the winter months (May to September) and animals stay around the few waterholes still available. This makes for the best wildlife viewing in Damaraland, although it can be visited at any time of the year.

Rain quenches the drought, although it rarely rains for long
Flowers are plentiful and skies are clear
Baby animals are present and wildlife is healthy
Birding is excellent while the migrant species are present
It tends to be very hot
Animals are dispersed and wildlife viewing isn’t as good

Damaraland has a harsh, semi-desert climate. Daytime temperatures can spike to well above 38°C/100°F during summer (November to April), with winter nights falling below freezing (October to April).

The Wet season occurs during summer and sees sporadic rainfall, unlikely to disturb your trip. In winter, conditions are extremely dry.

Dry Season – May to October - Winter

As the winter months wear on, conditions become drier and drier. These are the coolest months of the year.

May, June, July & August - This is a time of drought, lots of sunshine and the coolest temperatures of the year. Afternoon temperatures average 25°C/73°F. Mornings average around 10°C/50°F, but they can often fall below freezing. Pack warm clothes for early morning wildlife drives.
September & October - Temperatures are on the rise, averaging a warm 28°C/81°F. Early morning averages at 12°C/54°F. The month of October is characteristically very hot, with temperatures occasionally soaring above 38°C/100°F. The rains usually begin end of October/beginning of November.

Calling this the Wet season is slightly misleading, as there is still only a scant amount of rain. Yet, afternoon showers do occur, just not on a daily basis. The climate remains sunny and hot. Warmer mornings are typical, with averages of around 16°C/61°F.

November & December - The occasional thundershower occurs in November, signifying the beginning of the rainy season. It is still mainly dry, but these rains bring relief from the long, dry period. Temperatures are the highest of the year, with a typical afternoon 30°C/86°F.
January, February & March - Most rain happens during these three months. Thunderstorms are common in the afternoon, but the sun is often out all day long. Temperatures reach 29°C/82°F, but are known to spike higher.
April - April sees the rains slowing gradually, as the temperature cools to an average of around 28°C/79°F.

Southern Damaraland is easily reached by any car on good roads, but the area becomes more remote and challenging as you travel to northern Damaraland. Most visitors to the northern section fly to one of the lodges via charter flight. The distance from Windhoek is roughly 560km/350mi and from Etosha about 380km/240mi. Driving times are approximately six and four and a half hours.

Hosea Kutako International Airport (WDH) is where most visitors will enter Namibia. The airport is located 40km/25mi east of Windhoek