Etosha is Namibia’s most popular park for wildlife watching and is characterized by the vast, saline Etosha Pan. During the Dry season the waterholes around the pan become crowded with large concentrations of animals. Four of the Big Five are present, with only buffalo absent. Etosha’s floodlit waterholes provide a rare opportunity for nighttime wildlife-viewing.

Wildlife viewing in Etosha is exceptionally good during the Dry season. The variety and sheer number of animals is outstanding. Four of the Big Five are present in good numbers, only buffalo is absent. A constant stream of herbivores is commonly seen at waterholes. They include elephant, blue wildebeest, zebra, giraffe and several desert-adapted antelopes such as springbok and gemsbok.

Etosha has two near-endemic antelopes; the elegant black-faced impala, which can be found in breeding and bachelor herds, and the tiny damara dik-dik, usually spotted in pairs. Dusk and dawn is the best time for spotting lion, leopard and cheetah. Some of the less common predators are honey badger and bat-eared fox. Black rhino is a rare treat in the park, best spotted at night at one of the floodlit waterholes.

About one-third of the 340 bird species recorded in the park are migratory; including a good number of waders attracted to the Etosha pan in the Wet season. The pan is an important breeding ground for lesser and greater flamingos. The desert habitat is excellent for seeing a wide variety of birds of prey – up to 35 species, including many hawks, vultures, eagles and falcons. Migratory birds are present from November to April.

The best time to visit Etosha National Park is during the dry winter months from July to October. Less water is available during this time and the animals tend to gather around the few sources that are available. The Wet season (November to April) is less productive for spotting wildlife because the animals tend to scatter.

Best time for wildlife viewing with large numbers of animals at waterholes
Weather is good, although October is very hot
July to September is high season and it gets very busy
The sky is filled with dust and it can be hazy

Rainfall comes as a relief, although it rarely rains for long
Landscape is attractive and skies are clear
Wildlife is in peak condition and plenty of babies can be seen
Prime birding during the migrant season
Animals are dispersed making viewing difficult
It tends to be very hot

Etosha is hot and relatively dry. Like most semi-desert climates there is a large variation in temperature between night and day. Rain usually falls in the form of heavy thunderstorms. There is a Wet season, which coincides with the summer months of November to April. During the dry winter months, from May to October, rainfall is a rarity.

Rainfall is almost completely unheard of during the coolest months of the year. Conditions become drier as the winter season progresses. Water sources for wildlife become fewer and vegetation thins out.

The Wet season coincides with the summer months, yet rainfall is scant and usually occurs in the afternoon. Days are typically hot. The bitter cold mornings of the winter months are gone and averages of 17°C/63°F at night are common.

November & December – The rains usually start in November with the occasional thundershower. When the first rain falls, it comes as a relief after a long dry winter. These are the hottest months and afternoon temperatures are around 33°C/91°F.
January, February & March – Although it remains mostly sunny, these are the wettest months with frequent afternoon showers. The rain cools everything down to an average temperature of around 30°C/86°F.
April – April sees a dramatic decrease in rain. The temperature hovers around 30°C/86°F during the day as the Wet season comes to a close.

Etosha is located 435km/270mi north of Windhoek. It is easy to visit either independently (self-drive) or on a tour. The drive on paved roads takes about six hours. The roads in the eastern section of the park are accessible by 2WD car. There are no scheduled flights, but there are three airstrips inside the park for charter flights. Most of the upmarket lodges outside the park have private airstrips as well.

Most people arrive in Namibia at Hosea Kutako International Airport (WDH), located 40km/25mi east of Windhoek, and start their trip from there by 4x4 vehicle. Fly-in trips are also common, consisting of chartered flights taking travelers from park to park. 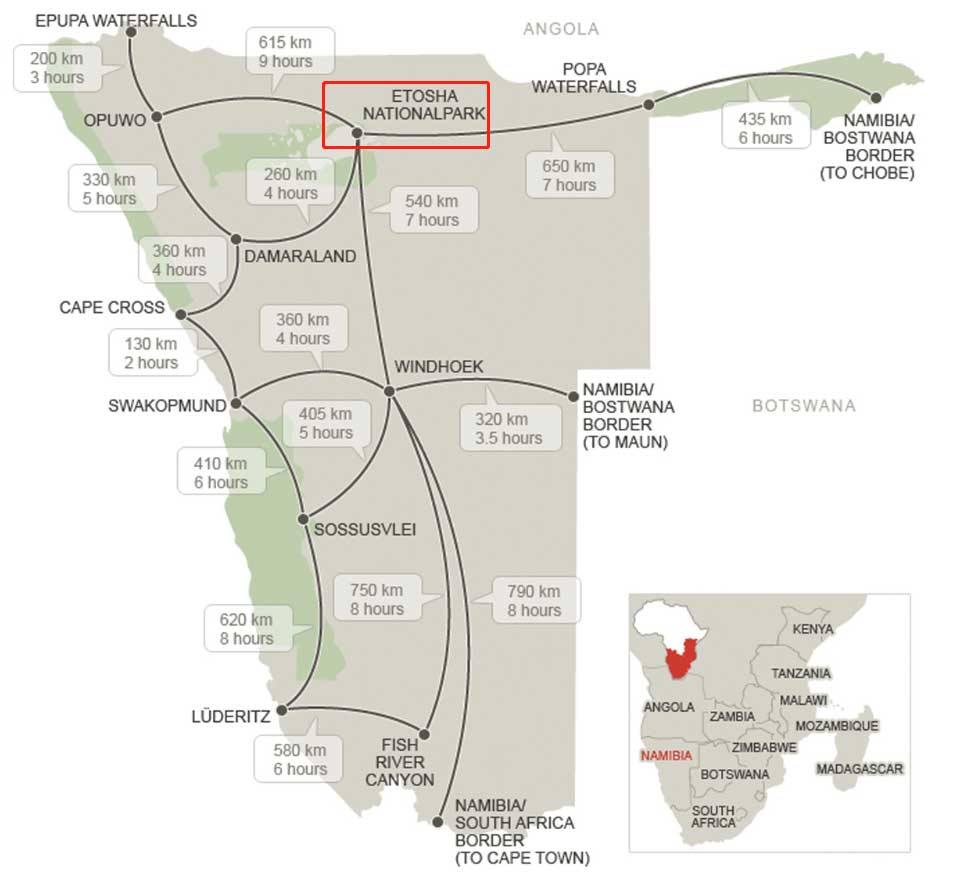