This huge park borders Mozambique's Limpopo National Park and South Africa's Kruger National Park to make up a vast wilderness area: The Great Limpopo Transfrontier Park. Due to heavy poaching, wildlife densities have historically been very low, but there has been a marked increase in populations over the last few years. The new Gonarezhou Conservation Trust, set up by the Frankfurt Zoological Society in June 2016, might well speed up this process with various plans in the pipeline, including the re-introduction of rhino in 2018. 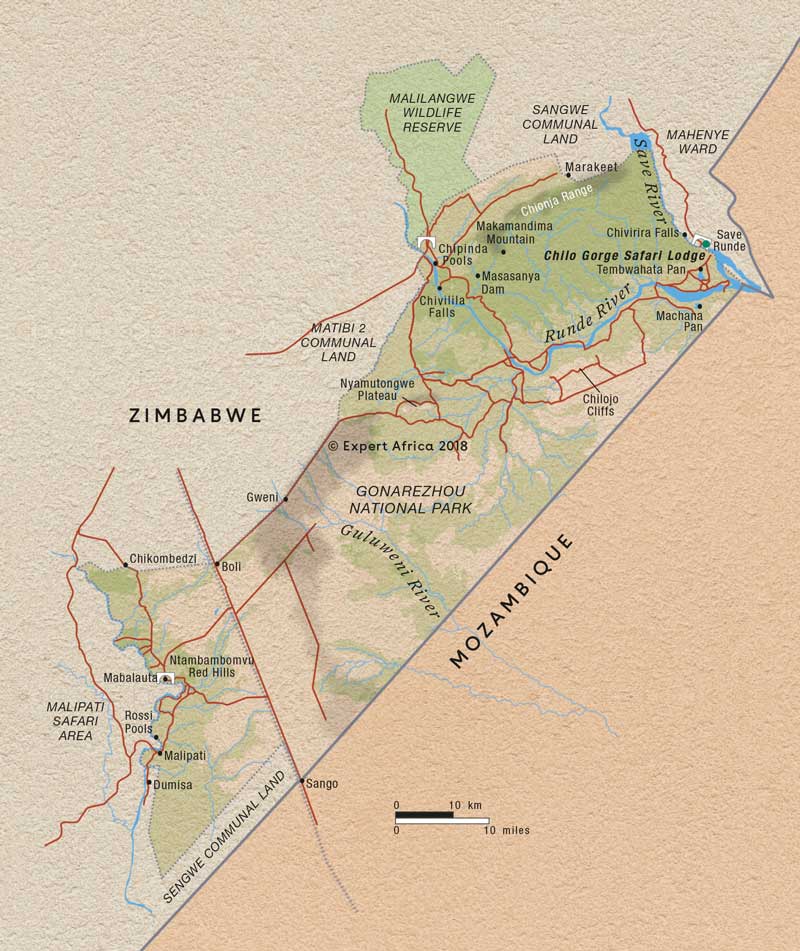 As part of the Great Limpopo Transfrontier Park (which spans over three countries), all large safari animals are theoretically present, including the Big Five. However, there are probably no rhino left in the area. Animals tend to be skittish, lowbut densities are increasing rapidly. The park has a healthy population of elephant, and buffalo herds up to 150 heads can be encountered. All big cats are accounted for but are very shy. The park has a wide variety of antelopes.

Gonarezhou is a great park to see some of the more unusual antelope species, including the shy nyala antelope and the tiny suni. The magnificent roan and sable antelope can also be seen. The park is home to 108 reptile species, including two endemics. The incredibly rare king cheetah is believed to occur in the park although it isn’t clear when they were last spotted.

With over 400 bird species recorded, Gonarezhou is an excellent birding. destination. Two large river systems (the Save and the Runde), along with several large pans, support an amazing variety of birdlife. Narina trogons and Angola pittas, normally very secretive, can be spotted while they are vocal during courtship from December to February. Raptors are well represented, and migratory birds are present from November to April.

June to October, in the Dry season, is the best time for watching wildlife in Gonarezhou National Park. Spotting animals is easier in these months because wildlife gathers around water sources and the vegetation has thinned out. During the Wet season (November to April), access to certain parts of the park is restricted.

Animals are easier to spot because they congregate around waterholes and rivers and vegetation is thinner
Clear skies and little rain
Minimal malaria risk, as mosquitoes are less numerous
There is less humidity, so the afternoon heat is easier to bear (except in October)
It is arid and dusty
Game drives in the early morning are cold; bring warm, wind-proof clothing

There is a fresh, green landscape
There are many newborn animals
Arrival of the migratory birds makes bird watching great
Some roads become difficult to navigate and access to parts of the park might be restricted
Wildlife viewing is not as good as during the Dry season
Midday is humid and hot
Many accommodations shut down from January to March

Gonarezhou’s climate is warm. The most temperate months are September to March, while May through August tends to be cold. April to October (the Dry season) is characterized by cloudless skies and plenty of sunshine. November to March (the Wet season) brings afternoon storms, which are usually followed by sun. It can also rain lightly over several days. Winter (the Dry season) and summer (the Wet season) happen at opposite times as in Europe and North America.

April – The Wet season comes to an end. Rains are still possible but become fewer and farther between. Temperatures begin to cool, particularly at night.
May, June, July & August – This is winter and the coldest time, with August warming a bit. During the day, temperatures are around 27°C/81°F, with it getting cold at night – around 11°C/52°F. Bring enough warm clothing for game drives early in the morning.
September & October – It remains dry most of the time, although the end of October brings the first rains, which are a relief. Days are hot with temperatures of over 31°C/88°F. Morning game drives tend to be warmer.

November – Although rains don't come every day, the Wet season has begun.
December, January & February – These are the months of the most rain. Rain is common most days (usually in the form of afternoon showers). However, it can also drizzle continuously for a couple of days. Daytime temperatures average 33°C/91°F while nighttime and early mornings average 20°C/68°F.
March – The end of the Wet season comes and the rains diminish. Temperatures average between 31°C/88°F and 19°C/66°F during the day and night, respectively.

Gonarezhou National Park is secluded and relatively inaccessible. It is located in the south of the country. There are two areas to visit: Chipinda HQ is located 550km/342mi south of Harare, and Mabalauta HQ is located 667km/414mi south of Harare. The roads in the park are often very bad, especially in the Wet season, and a good 4WD is essential.
Some lodges have airstrips, and your tour operator can organize chartered flights. Federal Airlines in conjunction with Pamushana Lodge runs scheduled flights to Buffalo Range International Airport (BFO) twice weekly from Johannesburg. The road transfer to the lodge from the airport takes 45 minutes.
Victoria Falls Airport (VFA) will be the point of arrival for most safaris. Alternatively, you can fly to Harare International Airport (HRE). Your safari package will probably include travel arrangements throughout the country booked by your tour operator. They will also arrange your pick-up at the airport and/or hotel.