You have to stand in the middle of Kafue National Park to understand just how big this place is. It’s one of the largest parks in Africa. You also have to stay here for at least a few nights to realize how wonderfully peaceful it is. Fortunately, it’s not hard to experience all this, as the park is an easy drive due west from Lusaka. The animals can be quite shy, but you’ll still see loads of wildlife. Four of the Big Five are easily found, only rhino is missing. 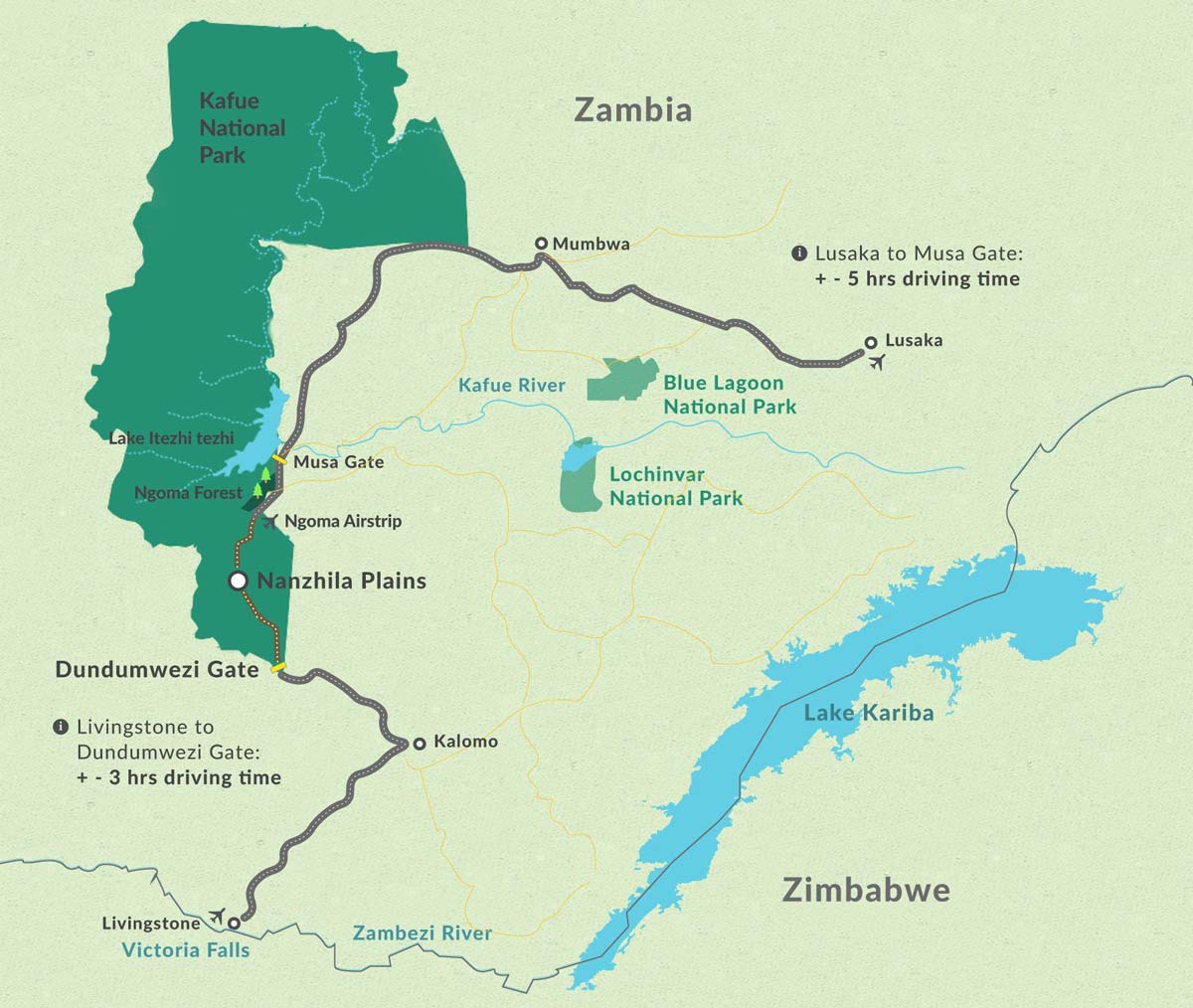 Great wildlife viewing
Lots of antelope species
Remote, with so much to explore
Great night drives, walking safaris and boat safaris
Easy to get to if you're driving
Not much accommodation
The animals, especially elephants, are quite shy
The view is hazy in the Dry season

Kafue offers really good wildlife viewing. There are big numbers of buffalo and elephant, even if they can be a bit shy after years of poaching. And there are plenty of hippo and crocodile to look at in the rivers. You should be able to take photos and videos of big cats too, including cheetah and leopard. Maybe even the rare wild dog.

Many safari-goers love seeing the big cats, and even bigger animals like elephant. But one of the most impressive sights at Kafue is the huge herds of antelope, especially the red lechwe in the wetlands (where you also find puku). Much harder to find in the swamps is the rare sitatunga. On drier ground, you’ll spot Lichtenstein's hartebeest, roan antelope and oribi.

With its diversity of habitats, Kafue is Zambia’s best birding destination – more than 480 species have been recorded here. The rivers, wetlands, floodplains and miombo woodland offer a variety of environments for different species. The most sought-after species are the localized black-cheeked lovebird, which is quite easily seen in the south of the park, and Zambia’s only endemic (unique to the country), the elusive Chaplin’s barbet. Migrants are present from November to April.

The best time to visit Kafue is from July to October: stretches from the middle to the end of the Dry season. The bush has dried out and thirsty animals head to rivers and waterholes, which makes these the best months for wildlife viewing. Consider visiting the large wetlands of the Busanga Plains around now because you won’t get through the flooding in the Wet season.

You can more easily find animals in the thinning bush and where they go to drink
Days are sunny; it rarely rains
The malaria risk is low as there are few mosquitos around
Busanga Plains is only accessible in the Dry season; it’s best visited from August to October
High season rates may apply
The sky is very hazy and the bush looks parched
October is very hot
Mornings are cold; wear warm clothing on early-morning game drives

The scenery in the ‘emerald season’ is green and fresh
There are few tourists around and rates are low
It’s the best time for birding because migratory birds arrive
You can see lots of newborn animals
You’ll see more animals in the Dry season
Many lodges are closed, and the Busanga area is off-limits
Roads are in bad condition and various game-drive routes become impassable
It’s hot and humid
Malaria is a bigger concern than in the Dry season

Kafue has a hot climate, with a Wet season and Dry season. The average temperature is quite uniform throughout the year, as the park is in the tropics. However, there is an increase in temperature in October, before the rains begin. The nights tend to be cooler in the Dry season, from May to October.

There is very little rain in the Dry season. This is the best time for wildlife viewing, and it gets better as the season progresses. It is warm during the day, but cold at night and in the early morning. Warm clothing is essential for early morning game drives.

May – This is the start of the Dry season. The bush is still lush, and there is a lot of water around, but precipitation has become minimal.
June, July – The rain has completely stopped. These are the coolest months – daytime temperatures are around 25°C/77°F. It gets cold at night with average temperatures of around 6°C/43°F.
August, September – It is still completely dry. The bush is starting to look parched. It is warming up too, and September has an average daytime temperature of 31°C/88°F. Mornings are a little less cold at 13°C/55°F on average.
October – Temperatures keep increasing to an average of 33°C/91°F. Peak temperatures can be much higher. Mornings are more comfortable with temperatures around 16°C/61°F. The first rain usually falls this month – temperatures will drop after the rain.

During the warm, Wet season, roads deteriorate, and many camps are closed, especially on the Busanga Plains – this area is off-limits during these months. Afternoon showers are a regular event, and thunderstorms often light up the sky. The bush is green and lush.

November – It usually begins to rain in late October or November. The rain is a relief because the bush is very dry and hot. Daytime temperatures average 30°C/86°F. It doesn’t rain every day, and there are thunderstorms in the afternoon.
December, January, February, March – The wettest months bring rain most days, but rarely lasting the whole day. Daytime temperatures are around 28°C/82°F, while night and early morning temperatures average about 18°C/64°F.
April – This is a lovely month with less rain, but everything is lush and green. Although there isn’t much rain, the roads are still wet

Self-drive to the park is relatively easy on the Lusaka-Mongu Road, where a few lodges are accessible not far from the highway. However, to venture any distance into the park itself, a good 4x4 is essential. There are also several safari operators based in Lusaka offering mobile trips into Kafue.

Most people staying at the high-end lodges in the park fly by chartered plane to Kafue. There are several airstrips in the park. 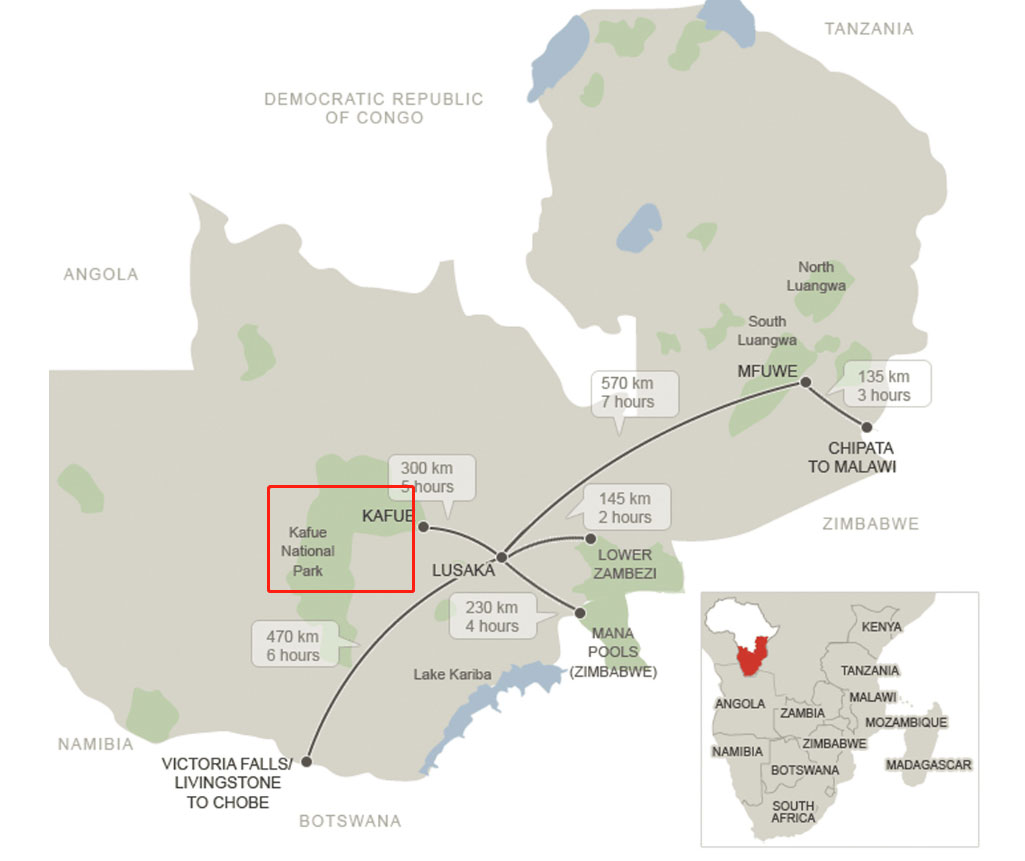