Kaokoland is a genuine wilderness area. The desert scenery is breathtaking and inhospitable at the same time. There is scattered wildlife around, including desert elephants, but this is not really a wildlife viewing destination as densities are very low. The area is the ancestral home of the proud Himba people and a visit to a tribal village is highly recommended. 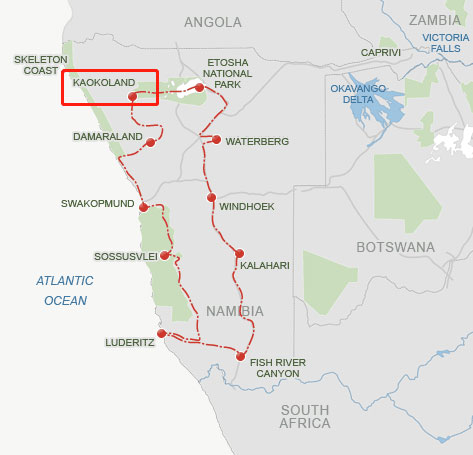 Kaokoland is not, primarily, a wildlife destination. The very remote desert wilderness doesn’t support large populations of animals, but gemsbok, springbok and Hartmann's mountain zebra are scattered throughout the area. The Kunene River, which forms the border between Namibia and Angola, harbors many nile crocodiles as well as a few hippos.

Although most visitors don’t come here to see wildlife, everybody hopes to catch a glimpse of the sought after desert elephant. They are, however, easier to track further south in the more accessible Damaraland region. The area is home to a wide variety of small reptiles including the endemic desert chameleon.

Kaokoland doesn’t have a lot of bird activity due to its dry desert environment. There are, however, many interesting species present, including the rare rufous-tailed palm-thrush. One of the best birding spots is in the palm forest along the Kunene River. Boat trips on the Kunene river are a great way to pick up some of the water associated birds, such as giant and malachite kingfisher, fish eagle and goliath heron. Migratory birds are present from November to April.

Kaokoland can be visited throughout the year, but the climate is most pleasant during the winter months, from May to September. The region turns a stunning green after rainfall, but the exact timing of the rains is hard to predict, and it doesn't rain much during the Wet season. Wildlife viewing is hit-and-miss throughout the year.

The rains are a relief and it rarely rains for long
The scenery turns greener after rainfall and the skies are clear
Migrant birds are present and birding is at its best
Low season rates may apply
It tends to be very hot
If visiting both Kaokoland and Etosha, wildlife viewing in Etosha isn't very productive at this time

Kaokoland is a desert with typical big differences in night and day temperatures. The graph above illustrates averages, though temperatures can build upwards to well above 38°C/100°F and freezing temperatures can occur during winter nights (May to October).

There is a Wet season (November to April) during the summer – although it never rains that much – occasional thunderstorms can be expected. Winter time (May to October) is totally dry.

Hardly any rain occurs during the winter season, which is also the coolest time of year. Drought increases as the season continues.

May, June, July & August – Afternoon temperatures of 22°C/71°F are common, although mornings are quite chilly (9°C/48°F) and require warm clothing. Despite being the coolest time of year, the sun is almost always shining. Drought is typical.
September & October – Temperatures increase as winter comes to an end. Temperatures of 26°C/82°F are the rule. Early mornings warm up to around 13°C/55°F. The rainy season starts somewhere between the end of October and the beginning of November.

Although rainfall is still low during this time of year, it is considered the Wet season. Temperatures are hot, and the sun is generally out all day. Random thundershowers occur, but not daily. Early morning temperatures are pleasant at 16°C/61°F.

November & December – Thundershowers begin in the month of November, although they don’t occur regularly. Temperatures can build to much higher than the average of 27°C/86F; upwards of 38°C/100°F or more.
January, February & March – Although mostly sunny during the day, thunderstorms occur during the afternoons with some regularity. The average daytime temp of 26°C/84F illustrates how the rain can lower temperatures overall, but they can also spike higher than that.
April – Rain slows and temperatures cool during the month of April. Average daily temperatures of 25°C/79°F are typical.

Most visitors to Kaokoland fly by chartered plane to one of the few lodges in the area. Driving independently is not recommended, unless you have experience in these kinds of hard-core expeditions. The area is totally undeveloped and remote. Anybody driving through must possess ample 4x4 skills, supplies and, ideally, travel in convoy with another vehicle.

Kaokoland is usually booked as part of a fly-in safari and visitors can fly here from Windhoek (the main point of entry into Namibia) or any other park or reserve in the country. Hosea Kutako International Airport is located 40km/25mi east of Windhoek.