Katavi is pure wilderness. This classic Dry-season park is completely off the beaten track, but teeming with wildlife. Four of the Big Five are present. Lion, buffalo and elephant are all very common but leopard sightings are more hit-and-miss. Rhino is absent. 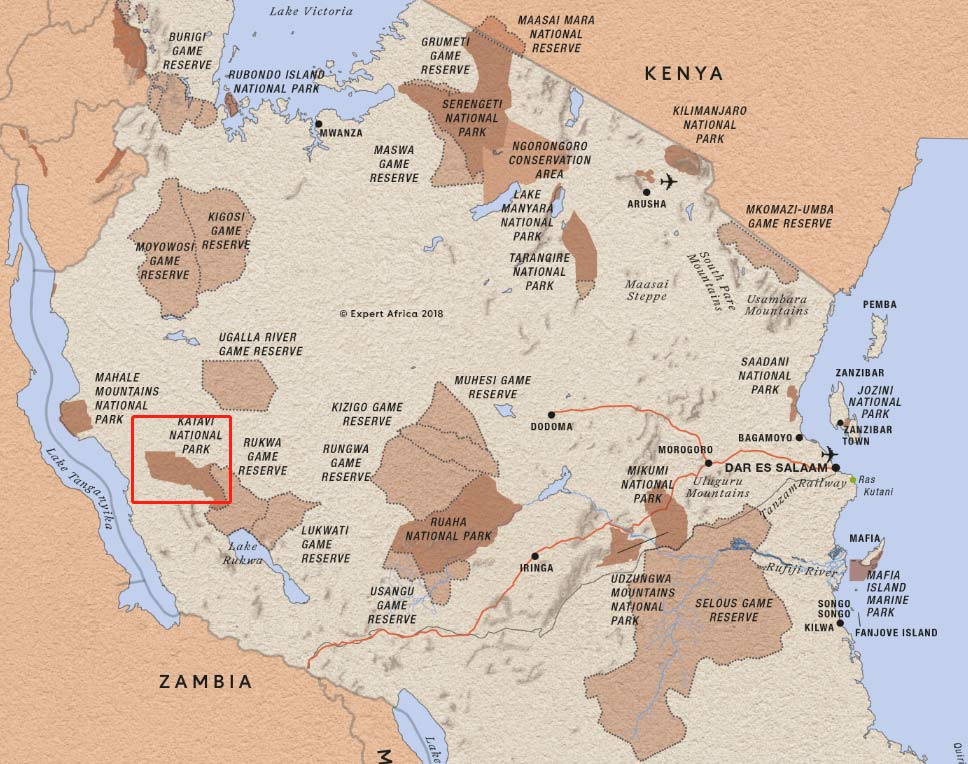 Good general wildlife viewing in the Dry season
Hippo pods converge in spectacular numbers in the Dry season
Unusual antelope species, like sable and roan
Very exclusive and doesn't get crowded
Difficult to get to and accommodation options are limited
Animals are scattered during the Wet season
Most lodges are closed from March to May

During the Dry season, the Katuma River is packed with hippo, and crocodile can be seen in caves in the river banks. Huge herds of buffalo, zebra and impala gather with elephant and defassa waterbuck around the drying water reserves of Lake Katavi and Lake Chada. Opportunistic lion are never far from the remaining water sources, waiting for their prey to come to them.

Katavi isn't particularly known for unusual animals, but it is the numbers of them that are staggering. Buffalo herds numbering thousands can be seen. Hippo burst out of the remaining puddles of the seasonal rivers at the end of the Dry season. Beautiful sable antelope can sometimes be found in the miombo woodland.

Katavi is mainly visited in the Dry season, which isn’t the best time for birding, but the rivers harbor a large concentration of water-associated birds throughout the year. Particularly common are herons, plovers, spoonbills, African openbills and groups of stork including yellow-billed and saddle-billed stork. Raptors are well represented, with the fish eagle, bateleur and white-backed vulture being very common. Over 400 species have been recorded, and migratory birds are present from November to April.

Katavi is a classic dry-country reserve. During the Wet season, from November to April, the wildlife disperses into the woodland and wildlife viewing becomes a challenge. The heat and humidity is oppressive in the Wet season. During the Dry season, the Katuma River is reduced to a narrow stream, and the floodplains become a magnet for wildlife.

Vegetation is thin, so animals are easier to spot
It is clear and sunny – rain is very rare
Malaria risk is lowered because there are fewer mosquitoes
Humidity and heat is less oppressive
It is very dry and dusty
Some lodges might still be closed in May

The scenery is lush
November to May is low season with better rates
Migratory birds are present, and bird watching is at its prime
Roads might be hard to travel
Most wildlife disperses into the woodland and wildlife viewing becomes very hard
Many lodges close for the whole Wet season or part of it
It gets very hot and humid, and there are many mosquitoes and other insects

The climate in Katavi is hot throughout the year. Katavi’s nights are pleasant (around 20°C/68°F). Temperatures during the day are around 32°C/90°.

Katavi has one continuous Wet season (from November to April). It tends not to rain all day long but afternoon thundershowers can be expected. The Dry season is from May to October.

May – This is the end of the Wet season. It still rains occasionally during this month.
June, July, August & September – Afternoon temperatures are usually around 31°C/88°F. Most days are sunny and clear. Rain would be very rare at this time. June to August have the coldest nights but are still moderate with minimum temperatures of about 17°C/63°F on average.
October – This is the end of the Dry season. October has the highest temperatures of the year, differing only slightly from other months. Rain can be expected on some days and humidity will gradually increase.

November, December, January, February, March & April – The humidity is high, and it can feel incredibly hot. Afternoon temperatures are usually around 32°C/90°F and night temperatures are around 21°C/70°F. Thunderstorms in the afternoon are probable – and it will rain almost every day – but rarely all day long.

The best way to get to Katavi is by a flight from Arusha. The only public, scheduled flight is the twice-weekly service between Ruaha, Katavi and Mahale operated by Safari Air Link.

Depending on your itinerary, your entry point to the country will either be Kilimanjaro International Airport (JRO), about 46km/29mi from Arusha, or Julius Nyerere International Airport (DAR) in Dar es Salaam. In most cases, your tour operator will pick you up from the airport and make ongoing arrangements, including the charter flight to the park's airstrip.