Khaudum is a great wilderness destination with a healthy population of wildlife. This is probably Namibia’s second-most productive wildlife destination, after Etosha, but much less visited. The park is mostly a self-drive destination for experienced 4x4 drivers who travel in convoy. Most big safari animals are present including lions and wild dogs. There are no rhino or buffalo. 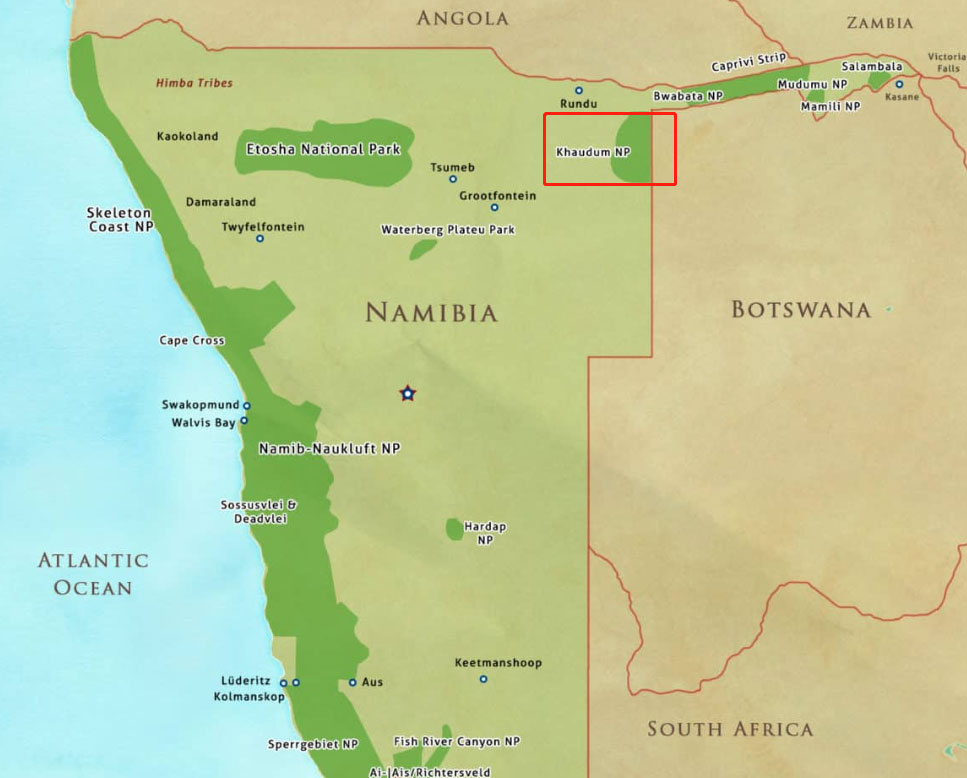 For those who are well equipped and experienced, Khaudum offers adventurous wildlife viewing. Most big safari animals are easily seen and predators are present in good numbers. Lions are sometimes spotted and this is one of the strongholds for wild dogs. Giraffe, zebra and blue wildebeest are common and elephants are particularly abundant in the Dry season when they migrate from neighboring Botswana.

There is a good variety of antelope in the park. Some are commonly seen throughout Namibia, such as greater kudu, oryx, steenbok and duiker, but some are more unusual like the fast running tsessebe and the endangered roan and sable antelope. Red hartebeest is also spotted occasionally. Of the smaller predators, side-striped jackal is quite common in the park.

Khaudum offers great birdwatching opportunities. It has over 300 species recorded and is a magnet for summer migrants, such as Abdim’s stork, African golden oriole, yellow-billed kite, steppe and lesser spotted eagle. The migratory birds are present from November to April. Although Khaudum offers great birdlife it is a challenging area to both get to and explore. You need to be well kitted out for a trip here and have some wilderness experience in the African bush.

The months of June to September make up the dry winter season, and this is the best time for wildlife viewing in Khaudum. Animals congregate at receding water sources and foliage thins out in these dry conditions, which makes sightings easier. In the Dry season big herds of elephant migrate into the park from neighbouring Botswana. During the Wet season animals scatter and roads can become impassable.

Foliage thins out making sightings easier as animals gather at water sources
Big herds of elephant migrate into the park from Botswana
The warm weather isn’t overly oppressive (except during October)
The park never gets busy, not even during the country’s high season
Dust fills the air and conditions are very dry

Rainfall is a relief when it happens, but rains never last long
The scenery is more attractive, there are many flowers and the sky is clear of haze
Animals look healthy and baby animals are abundant
Best time for birding due to the arrival of migrant species
Animals are dispersed and wildlife viewing is less productive
Roads can become impassable after heavy rains
Heat can be overbearing
If visiting both Khaudum and Etosha; wildlife viewing in Etosha isn't very productive during the Wet season

The climate is hot in Khaudum. The summer months correspond with the Wet season (November to April) while the winter season (May to October) experiences no rainfall.

Devoid of rain, these are the coolest days of the year. As the season wears on, drought increases.

May, June, July & August – Warm clothes are necessary to deal with the cold early morning temps that are common this time of year. It warms up throughout the day to upwards of 26°C/79°F. There is, literally, no rain.
September & October – Temperatures pick up around winter’s end, with October being the hottest month of the year. The average temperature is 34°C/93°F, but peaks are much higher. Rains could start as early as the end of October, although it is difficult to predict.

Warmer early morning temps (18°C/64°F), sunshine, and sporadic afternoon showers are characteristic of the summer months. This is when the Wet season occurs.

November to December – The start of the rains is typical of November, although they really gain traction in December. More often dry than not, there may be an occasional shower in the afternoon, with temperatures of 33°C/91°F considered normal.
January, February & March – January and February are the wettest months with showers occurring mostly in the afternoon. Sunshine is prevalent during the day and temperatures average 30°C/86°F.
April – There is a decline in rain during April. It slowly starts to cool down as summer ends.

Khaudum is located 796km/494mi northeast of Windhoek. The park is rarely visited on an organized tour but can be explored independently on a self-drive safari. Visitors must come with fully equipped 4x4 vehicles and ideally travel in pairs. The sandy roads are challenging, and self-drive safaris should only be undertaken by travelers who have a lot of experience with these sorts of expeditions.

Tours primarily begin by 4x4 in Windhoek. The airport is Hosea Kutako International Airport (WDH) and can be found 40km/25mi east of the city.