Kibale National Park (formerly Kibale Forest NP) is the best place for chimpanzee trekking in Uganda. Thirteen species of primates have been recorded, which is the highest number for any Ugandan park, and several monkey species can usually be seen on forest walks. Birds and butterflies are abundant.

The chimpanzee community visited by trackers in Kibale is the best habituated in Uganda and sightings can be excellent. The park’s diversity of primates is one of the highest in Africa, with 13 species identified. Black-and-white colobus, red-tailed monkey and blue monkey are all regularly spotted. Several nocturnal species are present as well, including potto and the eastern needle-clawed bushbaby.

The park provides refuge to the world’s largest population of the endangered red colobus monkey, and it is an important stronghold for Uganda mangabey, a rare national endemic (only occurs in Uganda).
Kibale is home to many mammal species aside from primates but they are rarely encountered. Elephant and buffalo roam the forest and other species present are giant forest hog, warthog, bushpig, bushbuck, blue, red and Peter's duiker.

Kibale is a bird-watcher's paradise. More than 370 species have been recorded and many are forest specials, including the sought-after African pitta. Four bird species have not been recorded in any other National park of Uganda: Cassin’s spinetail, blue-headed bee-eater, Nahan’s francolin and Masked apalis. The best bird-watching spot is the Bigodi Wetland Sanctuary – a community project where experienced guides take you on a four-hour trail. Migratory birds are present from November to April.

Kibale is open for chimpanzee trekking throughout the year. December to February and the months of June and July are the driest months and are therefore the best times for this activity. Walking the trails is easier at this time and the overall experience tends to be more enjoyable.

December to February and June to July – Dry Season

March to May and August to November – Wet Season

The climate in Kibale is moist and temperate. Temperatures stay almost the same year-round. Daytime temperatures are about 27°C/81°F, cooling off nightly to about 15°C/59°F.

Kibale lacks a real Dry season; rain is possible anytime. However, December through February are typically drier and so are June and July. Two Wet seasons exist: March to May and August through November. It is recommended to bring waterproof clothing.

Dry Season – December to February and June to July

December, January & February – Rain is possible, despite these being the driest months. It is an excellent time for chimpanzee trekking. Daytime temperatures are 28°C/82°F on average, and drop down to about 14°C/57°F at night.
June & July – This time is relatively dry, but there is still potential for rain – even for several days on end. Average temperatures are around 27°C/81°F in the afternoon and 15°C/59°F in the early morning.

March, April & May – Wet weather is typical, with rainfall peaking in April. The forest trails can become slippery, making chimpanzee trekking more challenging.
August, September, October & November – These are the wettest months of the year. A 4WD vehicle must be used on the access roads. Temperatures max at around 27°C/81°F and fall on average as low as 15°C/59°F.

Kibale will rarely be a destination in itself – it’s more suited as a stop among other parks on a tour of Uganda. Kibale National Park is located in western Uganda. The chimp trekking trailhead at Kanyanchu is 35km/20mi southeast of the town of Fort Portal, a 30-45 minute drive on what is now a good surfaced road, and 360km/224mi (about six hours) from Kampala.

Entebbe International Airport (EBB) will be your entrance point into the country. It is located about 46km/29mi from the capital, Kampala. In most cases, your local tour operator will pick you up from the airport and will also provide for any additional transportation as part of your tour package. 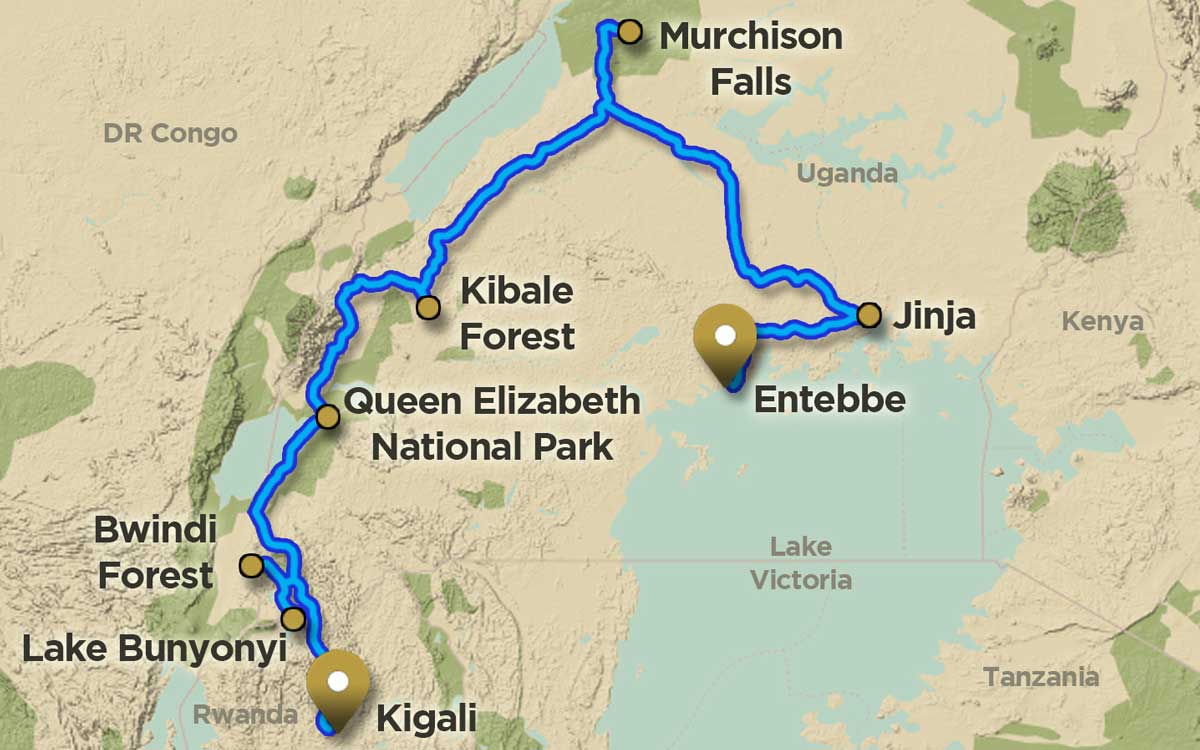