Kidepo Valley is in the remote northeast corner of the country. The park has a true wilderness feel and is a great destination for the adventurous traveller. It has excellent wildlife viewing during the Dry season, featuring several species not encountered anywhere else in the country

The park has arguably the most diverse savannah fauna of any park in the country. It is particularly rich in predators, including lion, leopard, cheetah and bat-eared fox. Black-backed and side-striped jackal are both present. There are large herds of buffalo. Twelve antelope species occur in the park, including Jackson's hartebeest, oribi, eland, Uganda kob and klipspringer.

Kidepo usually offers excellent lion and elephant sightings. Herds of up 1,000 buffalo are often encountered. Cheetah are seen with increasing frequency, and it is home to many dry-country species, among them caracal, aardwolf, greater and lesser kudu, mountain reedbuck and Guenther's dik-dik. Five primate species are present, including the localized patas monkey. Lucky visitors might spot the endangered Rothschild's giraffe.

Kidepo Valley has a very impressive bird list of over 470 species, the second-highest population of any Ugandan reserve, following only Queen Elizabeth National Park. Sixty birds on its list haven’t been recorded in any other Uganda park. No comprehensive survey has been done, so visitors could easily see some species not previously recorded for the park. Kidepo is especially good for spotting raptors, with 56 species on record. Migratory birds are present from November to April.

The prime time to see wildlife in Kidepo Valley NP is during the Dry season (September to March). Kidepo is however located in a semi-arid region and can be visited throughout the year. The Wet season months (April to August) are pleasantly less hot and bring beautiful scenery. Bird watching is at its best at this time as well.

Even though animals are easier to spot in the Dry season, you'll still see a decent amount of wildlife
Migratory birds can be found, and birding is at its best
The scenery is lush and green, and the air is crisp
The heat is less oppressive
Animals disperse from the valleys, moving to higher ground where they are more difficult to locate

The climate in Kidepo Valley NP is semi-arid. Droughts are common. Temperatures can reach as high as 40°C/104°F, but average around 29°C/84°F in the afternoon and 17°C/63°F at night. There is one Wet season (differing from two Wet seasons in most of the country) from April to August.

September, October & November – It might still rain some days as the Wet season transitions into the Dry season. It is getting warmer, with average temperatures of about 29°C/84°F in the afternoon and 17°C/63°F in the morning.
December, January & February – There is almost no rain, and it gets drier and hotter. January and February are the warmest months with daytime temperatures of 32°C/90°F and morning temperatures of 18°C/64°F. Peak temperatures can easily rise to 40°C/104°F.
March – It is still dry, but the first rains will break the heat and settle the dust.

April, May, June, July & August – Afternoon showers should be expected. When compared to the Wet seasons of the parks in the south, there isn't a lot of rainfall. The lowest yearly temperatures are experienced, but the daytime still averages around 27°C/81°F, with morning temperatures around 17°C/63°F.

The best way to get to Kidepo Valley NP is by a scheduled or chartered flight.

It is also possible to drive to Kidepo. There are several routes. The most direct route, through Gulu to Lokumoit Gate, takes about 10 hours. The trip can be broken up with an overnight stop at Ziwa Rhino Sanctuary, Chobe Safari Lodge, Gulu or Kitgum. Two longer routes pass through the remote Karamoja subregion, arriving at Nataba Gate. Karamoja was subject to banditry in the past but it has been considered safe for several years and is a growing center of community-based tourism focused on the small town of Moroto.

Flights between parks are usually scheduled by your tour operator. They will also arrange for your pick-up from the airport or your hotel in most cases. You will enter Uganda by way of Entebbe International Airport (EBB), which is near the town of Entebbe and 46km/29mi from Kampala, Uganda’s capital. 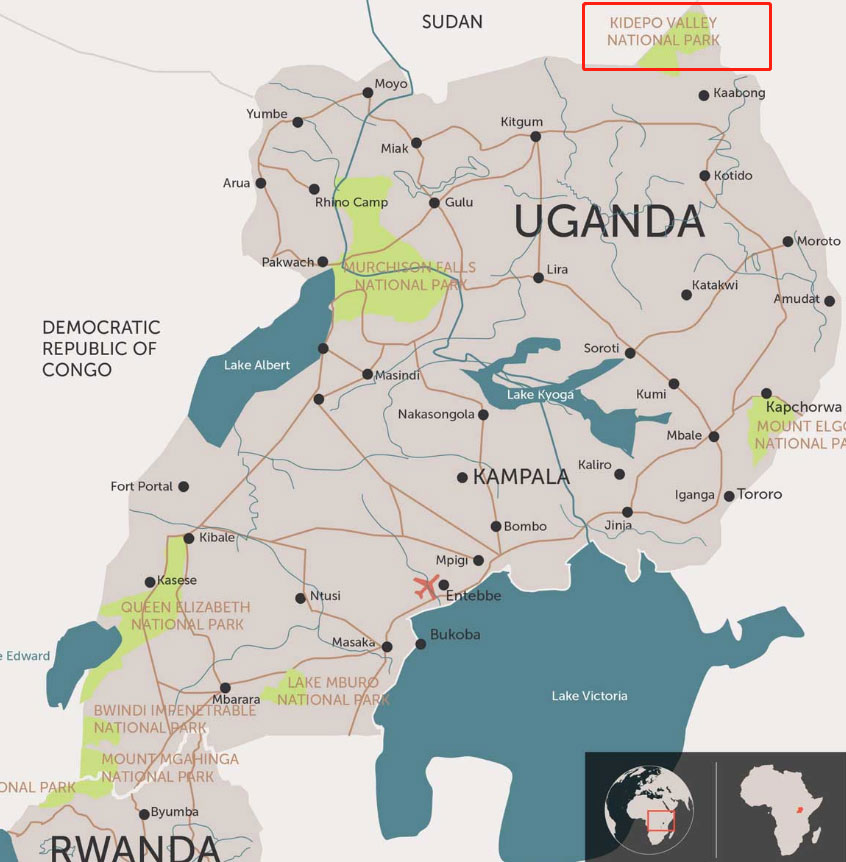