This small reserve can only be visited as a day trip and is on few tourist itineraries. There is only one road through which needs to be backtracked to leave. Most of the reserve consists of a large, algae-rich lake usually inhabited by big flocks of flamingos. Aside from birds, there is very little wildlife. 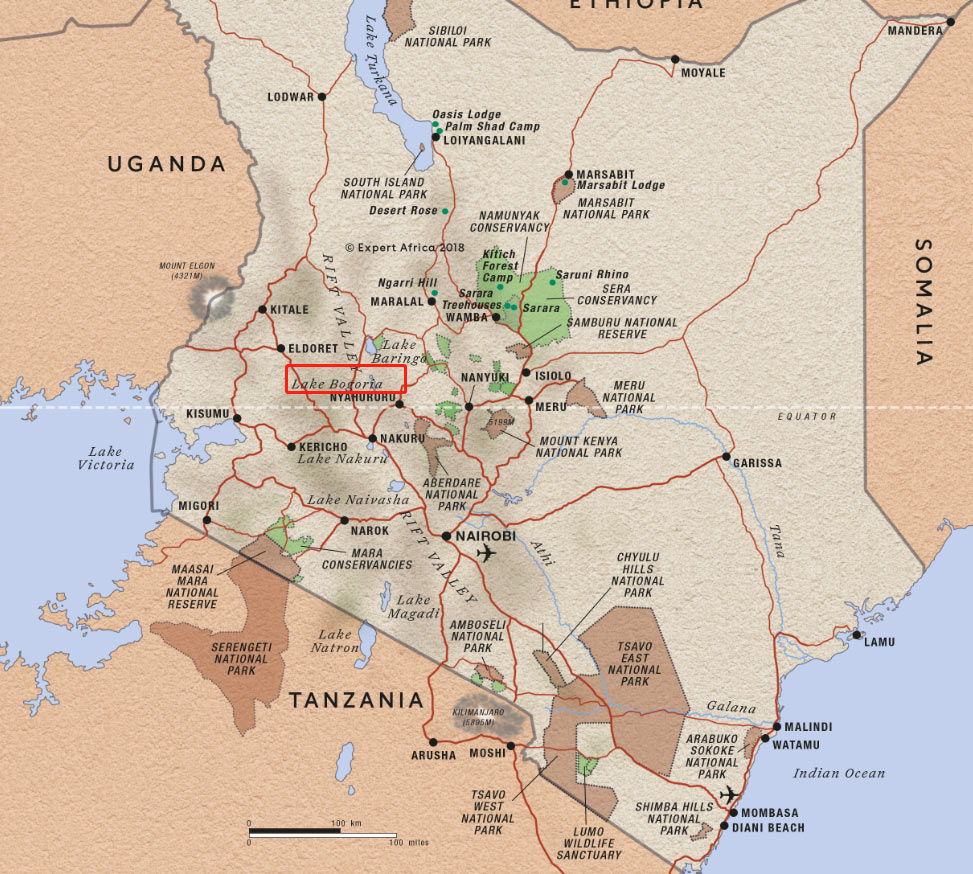 Unfortunately, overgrazing due to livestock encroachment is a big problem in the reserve, and there is very little wildlife to be seen. However, the birding is great and the real draw is the flamingos. Leopard tortoises are quite numerous. Mammals sometimes encountered are impala, dik-dik, zebra, Grant's gazelle and warthog

The reserve is home to one of Kenya’s last remaining populations of greater kudu. Although present, these magnificent antelope are very shy and you need to be lucky to see them. Dusk and dawn are the best times for a chance encounter.

Lake Bogoria National Reserve has more than 350 birds on its list, but the main attraction is an estimated two million lesser flamingos which flock in the shallow waters feeding on algae. Mixed in are many greater flamingos as well. Lake Bogoria is one of the best places in Kenya to see large flocks of these birds. Plenty of other waterbirds are easy to spot, and the call of a fish eagle is never far off.

Lake Bogoria is not a conventional safari destination. The best time to visit is when there are lots of flamingos, but this is unpredictable. At most times of the year though, there are usually a good number of flamingos, which makes it worthwhile visiting at any time of the year.

The weather is very pleasant. Days are usually sunny and dry. The ‘short rains’ experienced in November in most of the country aren’t very pronounced here. January and February are very dry.
September, October, November & December – It is mostly sunny, but it does rain occasionally. Afternoons are pleasant with temperatures reaching 28°C/82°F, but evenings and early mornings are cold at around 11°C/52°F.
January & February – These are the driest and warmest months before the rains. Temperatures reach up to 30°C/86°F and higher. Early mornings stay chilly with temperatures around 11°C/52°F.

It doesn’t rain a lot, but afternoon showers can be expected on some days. The heat breaks when it rains, and then it builds again until the next shower. Afternoon temperatures are around 28°C/82°F. April is the wettest month.

March – The rain might start in March or April. March seldom sees a lot of rain though. Afternoon temperatures are around 30°C/86°F.
April & May – These are the wettest months, but it seldom rains all day on continuous days.
June, July & August – June is drier, but the rain picks up again in July and August. July is the coolest month with afternoon temperatures reaching 26°C/79°F.

Lake Bogoria is located 250km/155mi from Nairobi. Bogoria is mostly visited as a side trip from Nakuru. The lake is more frequently visited now, because many of the flamingos that left Lake Nakuru, due to unsuitable conditions, made Bogoria their new home. You can either join a safari in Nairobi or rent a car and visit Lake Bogoria independently.

The southern entrance to the reserve is located 38km/23mi north of Nakuru – a 4WD is essential. The sealed road from Nakuru to the northern entrance is 150km/93mi.

Most visitors to Kenya come through Nairobi, which is one of the largest transport hubs on the continent. International flights arrive in Jomo Kenyatta International Airport (NBO), 15km/9mi southeast of Nairobi.