Liuwa Plain is Zambia’s hottest, off-the-beaten-track destination. The park was neglected for many years but recently came under the African Parks Foundation umbrella. Following this development, Norman Carr Safaris has opened a new, luxury, five-star lodge in 2017 and this opens up the park for high-end tourism. The park is home to a spectacular wildlife migration, involving thousands of blue wildebeest, zebra and other grazers, which gather at the beginning of the Wet season.

Home to a migration of zebra, wildebeest and other grazers
Very remote, little-visited park
A chance to stay in Zambia’s most exclusive camp
Game drives, walking safaris and boat safaris offered
Only one, expensive lodge in the park
Wildlife densities are low until the first rains arrive in November
Very seasonal park, only accessible from July to mid-December

While wildlife viewing at Liuwa Plain is great for a short time of the year, it may not be for the first-time visitor. There isn’t a great variety of flagship species, but the sheer numbers of grazers on the plain in the Wet season is phenomenal. The main species to be seen are herds of blue wildebeest and zebra. Other grazers joining in smaller numbers are tsessebe, buffalo and red lechwe.

With the herbivores come the predators. Spotted hyena is particularly common. This is also prime cheetah country, and wild dog are sometimes spotted as well. Lions were close to extinct in the park, but after several re-introductions, it looks as if they are back in the area to stay. Several lions have now also moved in on their own account, and it should only be a matter of time before a new generation become established here.

Liuwa Plain is an excellent birding destination throughout the year, with large flocks of resident pelicans, storks and plovers. It only gets better in the Wet season, from November to April, when huge numbers of migrants settle on the plains as well. The park is famous for the thousands of migrant black-winged pratincole that can be seen here. Crowned and wattled crane are abundant as well, with flocks of several hundred congregating on the plains. Threatened water birds include slaty egret and the whiskered tern, for which Liuwa Plain provides the only breeding ground in Zambia.

Liuwa Plain offers very seasonal wildlife viewing. The pattern here is the opposite of most parks. Animals migrate to the plains to stay during the Wet season, from November to about May. The plain becomes inaccessible after heavy rains but adventure seekers can still visit by restricting activities to walking and canoeing only. The best time to visit is after the first rain in November. December is also good, but as the season progresses, tracks deteriorate. Another good time to visit is in May and June at the end of the Wet season, and before the animals retreat.

The plain dries up, and driving conditions are good
Sunny days with little rainfall
There is always resident wildlife around, especially in May, June and October
Malaria risk is less, and there are fewer insects around
The sky is very hazy, and the grass is dead
October is very hot
Mornings are cold

Liuwa Plain is dominated by its Wet and Dry season and hot climate. Despite there being a notable increase in temperature in October – before the rains, as the park is in the tropics – average temperatures do not vary much throughout the year. However, it gets quite cold at night in the Dry season, from May to October.

There is little rainfall in the Dry season. The days are warm but nights are cold. Warm clothing is essential for chilly, early morning game drives. The plains dry up during the season. Some resident wildlife stays in the area, but a lot of animals move away.

May – This is the beginning of the Dry season, and rain showers are few and far between. All of the pans on the plain are full, and there are big herds of wildebeest and zebra around. Wildlife viewing is excellent.
June & July – The end of the rains and the plain is drying out. Animals are moving away. With daytime temperatures hovering around 28°C/82°F, these are the coolest months. Cold nights are good for sleeping with average temperatures of around 8°C/46°F.
August & September – No rain in these months and it’s warming up. September has an average daytime temperature of 34°C/93°F. Mornings are milder at 13°C/55°F on average.
October – Temperatures keep climbing to average 35°C/95°F. It can peak far higher, with the heat becoming oppressive in the middle of the day. Mornings are much better with temperatures around 16°C/61°F. The first rain usually falls this month, which sees temperatures drop.

This season is both warm and wet. Showers are the norm and thunderstorms are often spectacular. November is the best wildlife viewing month – this continues into December, but then the park becomes quite inaccessible for game drives. The lodge stays open and offers walking and canoeing activities. Self-drive to the park is restricted.

November – The rains usually begin in late October or November. By this time the plains are extremely dry, so rainfall is a relief. It is still very hot. The average daytime temperature is 32°C/90°F. Rain mostly falls as afternoon thunderstorms.
December – Rain increases and so do the herds of grazers. The plains become wetter and wetter, and driving becomes a challenge. Daytime temperatures average 30°C/86°F, while nights and early mornings are around 17°C/63°F.
January, February & March – The wettest months bring rain most days. Wildlife viewing activities might be compromised.
April – It rains less but roads are still in a bad condition. There is, however, a lot of wildlife around.

Self-drive to the park is only possible from July to mid-December. Even then, you should check the condition of the road beforehand. You will need to cross the Zambezi by ferry, and if the river is too high, there are no crossings. A sturdy 4x4 is essential, and you’ll need to be fully self-sufficient.

The easiest way to get to Liuwa is to book the all-inclusive package offered by Norman Carr Safaris, who own King Lewanika Lodge – the only lodge in the park- which includes the 2.5 hour transfer through the park from Kalabo Airport (KLB) to the lodge. 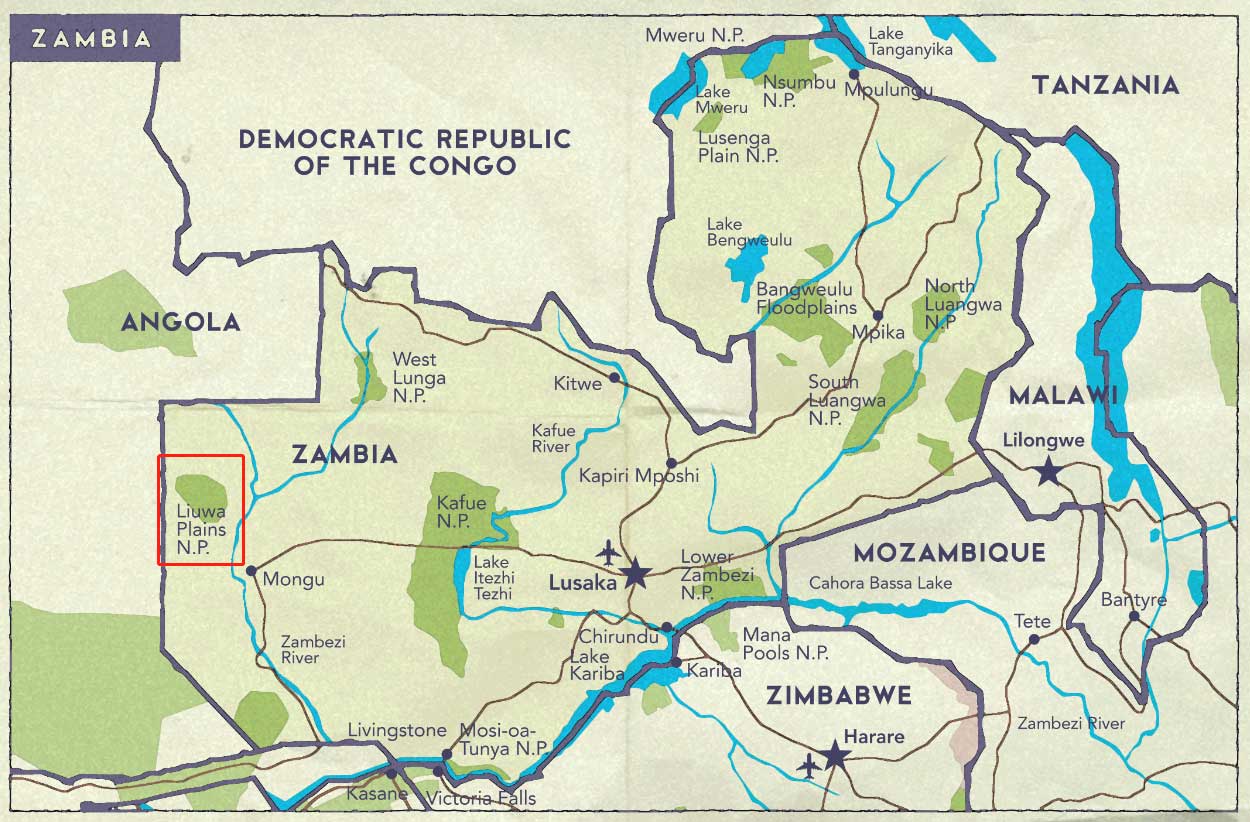