Mana Pools National Park, a World Heritage Site, is pristine wilderness on the Zambezi River. The park is usually explored by canoe or on foot, uniquely offered as guided or unguided activities, and is particularly appealing to adventure seekers. Four of the Big Five are present. 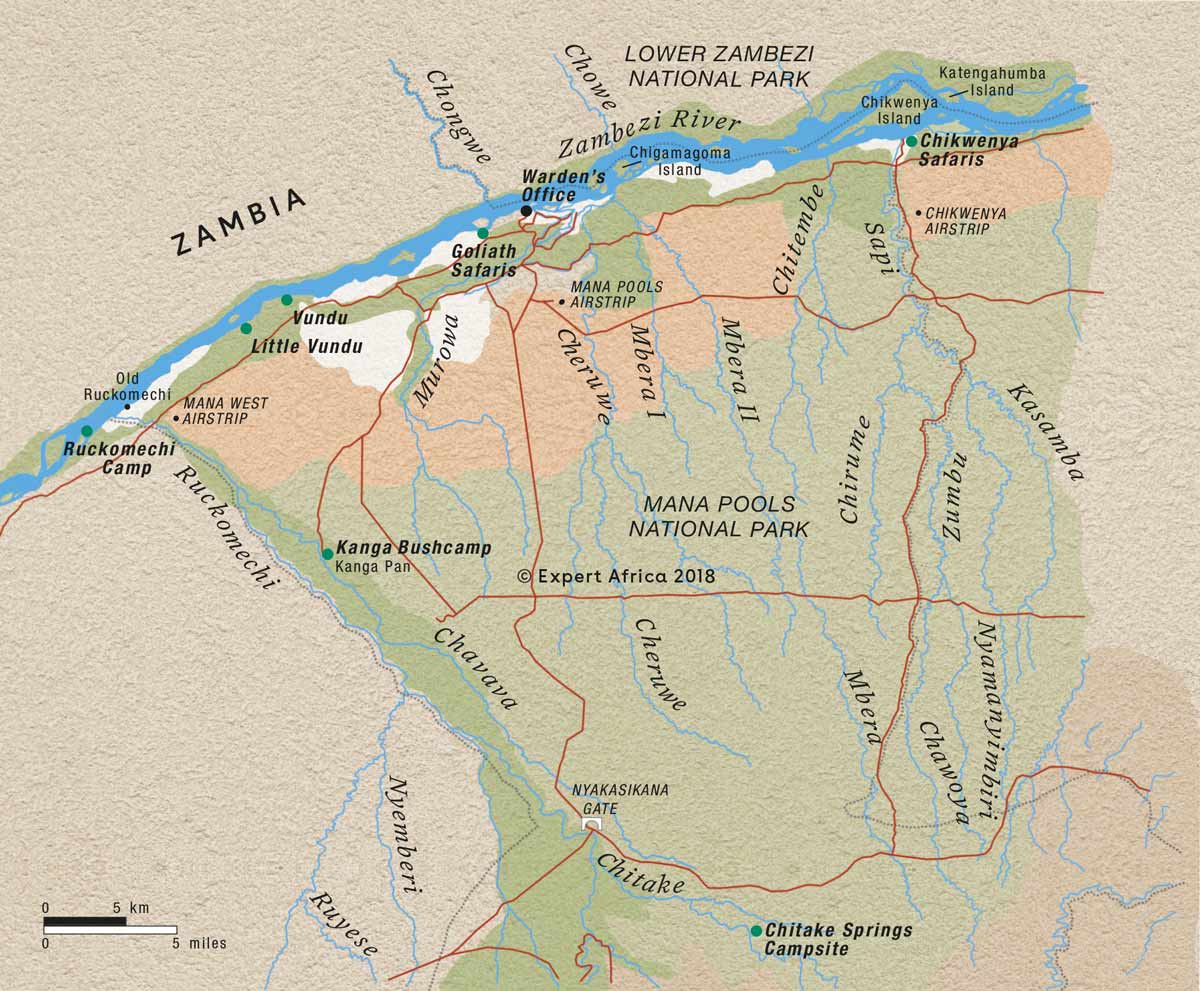 Top wildlife viewing with four of the Big Five present
Some of the best guides in Africa work here
Guided and unguided walking and canoeing is available
Excellent river fishing
Great birding destination
Less accessible than other parks in Zimbabwe, 4WD is essential
Limited road network

The park is home to most of the common safari animals, including four of the Big Five. Elephant and buffalo are abundant. There is a large concentration of lion and leopard in the south of the park. The pools harbor crocodile and hippo. Rhino, giraffe and wildebeest are all absent.

Mana pools has a very high density of wild dog. There are currently six packs with 100 adult dogs in the park. Seeing these social animals interact while on a hunt or while denning is a real treat. Fearless honey badger, usually extremely secretive, may sometimes be spotted at night around some of the camps where they have become habituated to people activity.

With over 380 birds recorded, Mana Pools is a great birding destination. The range of habitats includes woodland, escarpment cliffs and savannah. Waterbirds are well represented along the shore of the Zambezi River and the four pools, which fill up with flood water during the rainy season. Southern carmine bee-eaters nest on the riverbanks in the dry months. African skimmer, Pel’s fishing-owl and Lilian’s lovebird are just some of the rare treats to be expected. Migratory birds are present from November to April.

The best time for wildlife viewing in Mana Pools National Park is during the Dry season, from June to October. Animals are easier to spot because the dry weather thins the bush and wildlife concentrates around the Zambezi River.

Wildlife is easier to spot since the bush thins out and animals come to drink at the Zambezi River
Sun-filled, clear days with no rain
Malaria risk is lessened since there are few mosquitoes
With the exception of October, there is little humidity, making the afternoon heat more bearable
There is a lot of dust and drought
It is cold in the early mornings

Fresh, green scenery
Newborn animals are common
The arrival of the migratory birds makes birding superb
Wet, muddy roads can become treacherous or even impassable
The Dry season is better for wildlife viewing
It is damp with high humidity – the afternoons are hot
During January to March, many accommodations are closed

Mana Pools has a climate that is warm and hot. September to March is the warmest time of the year, while May to August makes up the coldest period. Mana Pools has greatly varying altitudes (from 329 to 1,180m or 1,079 to 3,871ft) which cause rather wide temperature changes within the park. Temperatures decrease by about 6.5°C for every 1,000m traveled upward (or 3.5°F per 1,000ft).

April – This is when the Wet season ends. It cools down – particularly at night, and the rains occur with less and less frequency.
May, June, July & August – Although there is a warming trend in August, these months are typically the coldest and driest. Daytime temperatures are around 28°C/82°F, but at night and during the early mornings the temperature hovers around 12°C/54°F. Warm clothes are essential for early morning game drives.
September & October – The first rains take place in late October, which brings a much-needed break from the dry weather. The heat reaches its peak in October, with average temperatures of 35°C/95°F during the day (with it frequently rising to well over 40°C/104°F). The high temperatures and increased humidity (once the rains have begun) can make it feel oppressive and uncomfortable.

November – The rains are in full force, although it would be unusual for them to occur every day. It often feels uncomfortably hot due to the high temperatures (33°C/91°F on average) and increased humidity.
December, January & February – During the wettest months, it rarely rains all day, but it rains almost every day. Afternoon showers are followed by bright skies, but rain can also come in the form of a continuous drizzle lasting days. Daytime temperatures average 30°C/86°F, while night and early morning average 20°C/68°F.
March – The Wet season ends as rains decrease. Temperatures average between 30°C/86°F and 19°C/66°F.

The remote Mana Pools National Park is located in the northern tip of the country, 388km/241mi from Harare and far from any human settlement. The park is mostly off limits to vehicles from November to April. Travel by 4WD is essential.
Most people fly into Mana Pools airstrip from Kariba, although charters can be booked from other destinations in Zimbabwe.
You will most likely enter the country via Victoria Falls Airport (VFA), a short distance from the town of Victoria Falls. Alternatively, you can fly to Harare International Airport (HRE) and drive from there. Your tour package likely provides for further transportation throughout Zimbabwe as arranged by your tour operator. 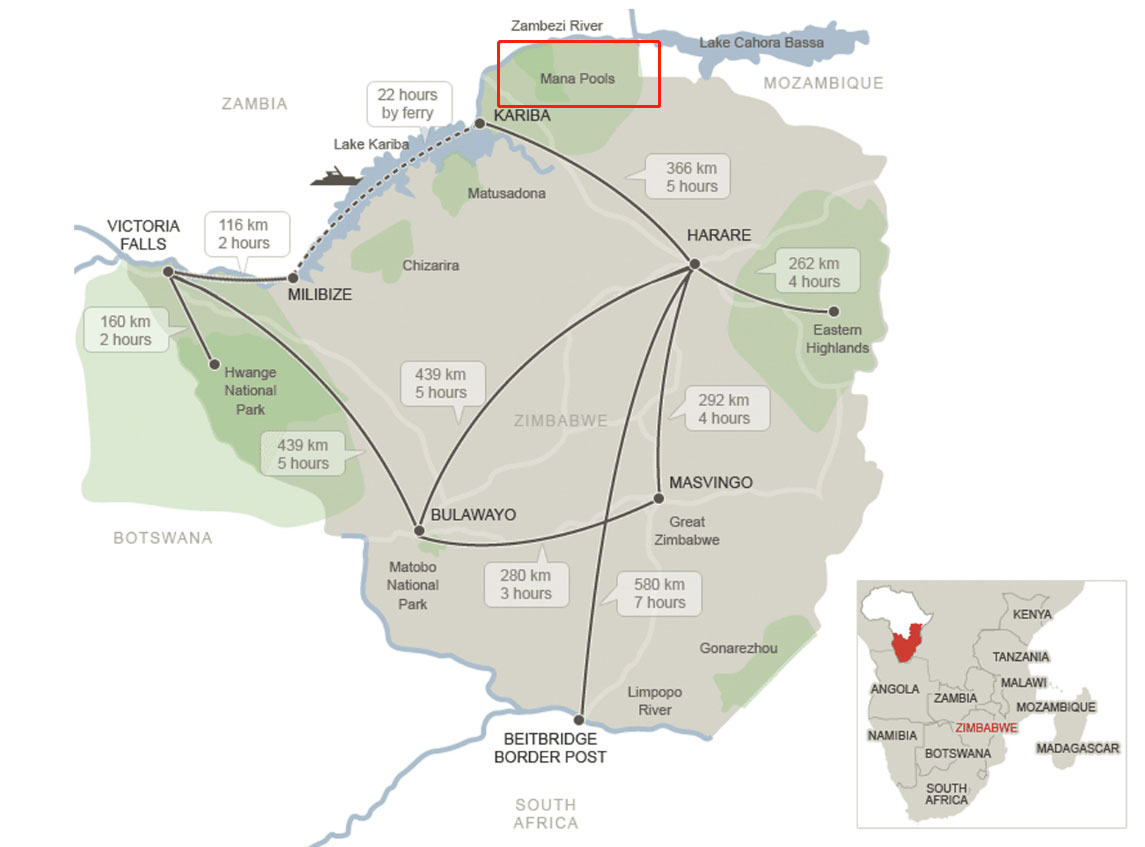