Matusadona National Park, on the shore of Lake Kariba, offers excellent wildlife watching in a magnificent setting. A unique wildlife viewing experience is offered along the shoreline from houseboats. All of the Big Five are present, including the endangered black rhino. Elephant and buffalo are abundant on the lake shore. 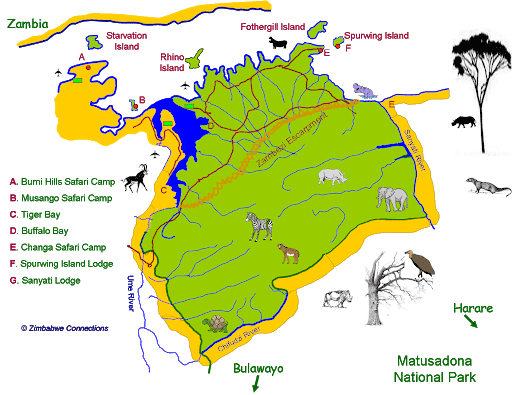 Excellent wildlife viewing
Great wildlife diversity, including the Big Five
Excellent birding destination
Walking, canoe and boat safaris are available.
Tracking black rhino on foot
Lots of accommodation options, including house boats
It gets hot and humid from November to March, and there are many mosquitoes
Not easy to get to by road, and 4WD is essential

Matusadona offers excellent wildlife viewing of most big safari animals, including the Big Five. Black rhino is present and can be tracked on foot. The lakeshore is excellent for hippo, crocodile and large herds of elephant and buffalo. Kudu, impala and waterbuck are some of the common antelope. Lion, leopard and spotted hyena are present in good numbers.

The clawless otter, one of Africa's more elusive mammals, can sometimes be seen swimming in the lake. Eland, roan and sable antelope inhabit the inaccessible miombo woodland, but may sometimes be spotted toward the end of the Dry season when they come to the lakeshore to drink.

Matusadona National Park, on the shore of Lake Kariba, has more than 240 bird species recorded and is particularly rich in waders and other water-associated birds. The dead mopane trees on the lakeshore are covered by large numbers of perched birds, including cormorants, darters and many fish eagles – their cries regularly filling the air. A boat trip in the scenic Sanyati Gorge offers a chance to see rare species including the elusive African finfoot. Migratory birds are present from November to April.

The best wildlife viewing in Matusadona National Park takes place from June to October, during the Dry season. Animals are easier to observe because the bush thins out and wildlife gathers around Lake Kariba.

Wildlife is easier to observe due to the diminished bush and because animals come down to drink at the lake
It rains very little, and there is a lot of sunshine
The chance of contracting malaria is small since there are few mosquitoes
Except for in October, the afternoon heat is easier to deal with because the humidity is lower
There is a lot of dust and drought
Morning game drives get cold, it is advised to bring warm clothing

The scenery is crisp and green
Baby animals can be seen
Migratory birds have arrived, so birding is at its best
Some roads become difficult to navigate and rivers might flood
Wildlife viewing is better during the Dry season
The middle of the day is very hot and humid
From January to March many lodges are closed

Matusadona has a warm to hot climate. September to April makes up the warmest weather, while colder weather is present from May to August. Variations in climate take place due to the changing altitudes (from 486 to 1,274m/1,594 to 4,180ft) inside the park. As altitude increases, temperatures fall by about 6.5°C for every 1,000m you climb (or 3.5°F per 1,000ft).

Sunshine often follows the afternoon rains that take place during the Wet season, from November to March, although a succession of drizzly days can also be typical. The opposite is true for the Dry season (April to October) when bright, sunlit skies are normal. Winter and summer are at opposite times of Europe and North America and correspond to the Wet and Dry seasons.

April – It is cooling down now, especially at night. Rains gradually taper off to an end.
May, June, July & August – Intense dryness is typical of these months, which are also the coldest of the winter. August tends to warm up a little bit. Daytime temperatures hover around 28°C/82°F, but nights and early mornings are cooler at about 12°C/54°F. Early morning drives in open vehicles are cold, so bring enough warm clothing.
September & October – These months are mostly dry until the first isolated showers arrive, usually by late October. It gets very hot during the day with average temperatures of 34°C/90°F in October. Scorching peaks of over 40°C/104°F are common in the lower altitude regions.

November – The rains are on the increase, although it might not happen daily. The high temperatures (32°C/89°F on average) and increased humidity could make the heat feel uncomfortably oppressive.
December, January & February – Rain comes in the form of drizzle for multiple days or afternoon storms followed by clear sky. These are the wettest months. Daytime temperatures average 29°C/84°F, while night and early morning average 19°C/66°F.
March – The rains lessen with the ending of the Wet season. Temperatures average between 30°C/86°F and 18°C/64°F.

Matusadona National Park is located in the northwest of the country on the shore of Lake Kariba and is 470km/292mi northwest of Harare. The drive into the park from Victoria Falls is very rough and needs a 4WD. In the Wet season from November to May, the road tends to be unnavigable.
The best way to get to Matusadona is by chartered plane or by boat across the lake from Kariba, which is 18km away.
Victoria Falls Airport (VFA) is your main point of entry into Zimbabwe in most cases. Alternatively, you can fly to Harare International Airport (HRE) and fly or drive from there. Your pick-up from the airport will be arranged by your local tour operator as part of your safari package. 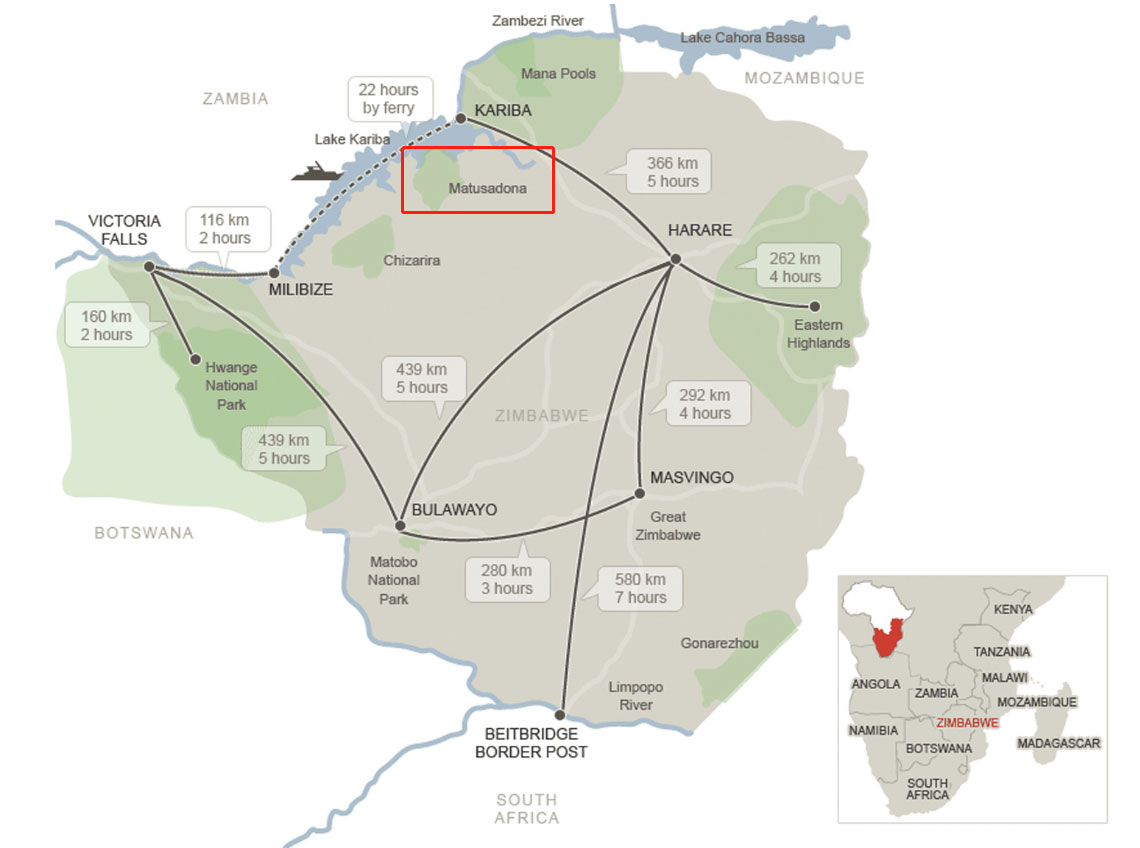