Meru is a lot less busy than some of Kenya’s more popular parks, and has an unspoilt feel. All of the Big Five are present. Elephant and buffalo are very common, and there is an enclosed rhino sanctuary containing both black and white rhino. The park is extremely scenic with tall doum palms growing along the park’s many watercourses. 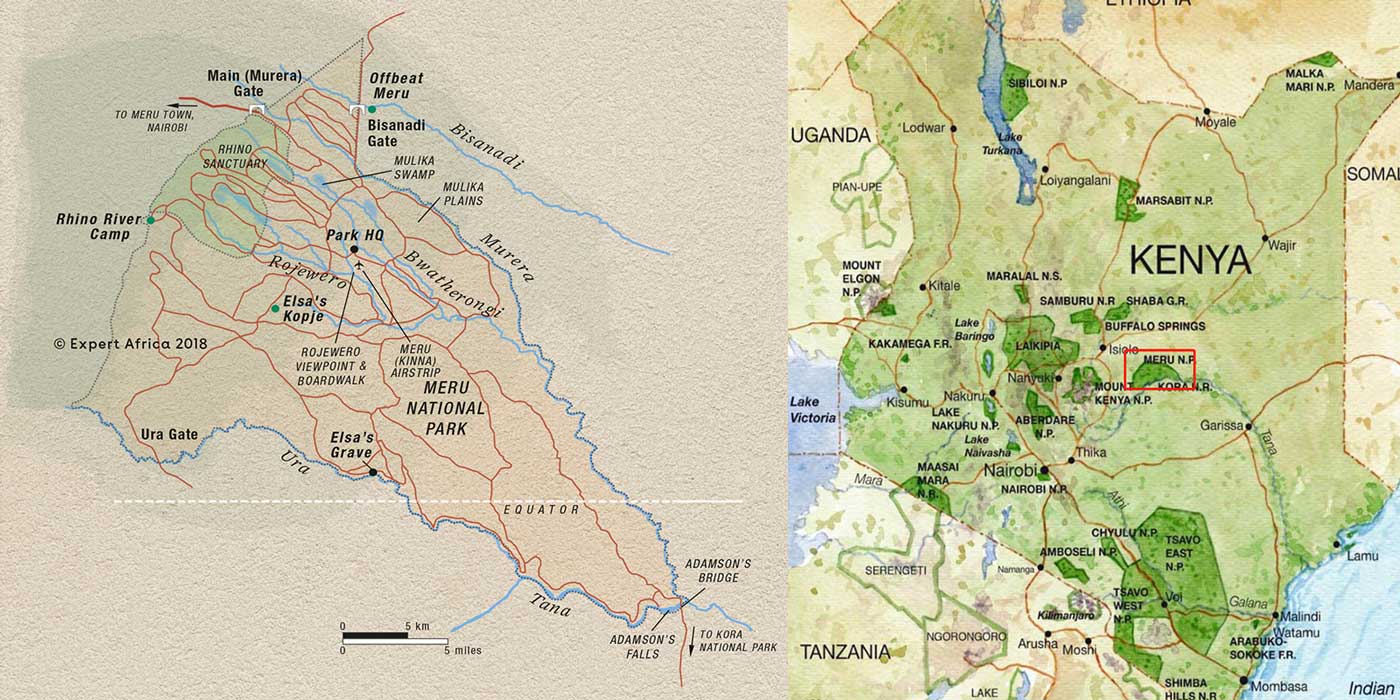 Meru offers good overall wildlife viewing and is home to the Big Five. Elephants are particularly common and relaxed. Big cat sightings are hit-and-miss. There is a chance of spotting a white or black rhino in the drive-in rhino sanctuary, although the vegetation is extremely thick. Hippos and Nile crocodiles are common along the Tana River.

Most people will appreciate Meru National Park for its northern specials, which are animals that are specially adapted to arid conditions. The reticulated giraffe is distinguishable by its dramatic pattern. Grevy's zebra occur alongside the smaller and more common Burchell's zebra. This is one of few places to encounter the shy lesser kudu and the impressive looking beisa oryx. Most odd of them all is the gerenuk with its elongated neck.

With more than 300 species recorded, Meru is an excellent birding destination. It has several northern Kenya specials, including the impressive Somali ostrich, Boran cisticola and vulturine guineafowl. The noisy yellow-necked spurfowl is very common and the sought-after Hinde’s babbler can sometimes be spotted as well. The rivers running through the park offer the right habitat for Pel’s fishing-owl, the elusive African finfoot and the localized golden palm weaver as well as more common water birds.

Meru can be visited throughout the year, but wildlife viewing is best in the Dry season from June to September. Wildlife watching is usually more difficult during the long rains (March to May), and the short rains (October to November). During this time the grass tends to be very high making spotting animals more difficult. Elephants migrate out of the park in the rainy season.

It is sunny with little to no rain
The grass is short and animals gather around water sources, making spotting easier
The park never gets very busy
Very hot and dry
A lot of dust is in the sky

March to May – Wet Season

The park is close to empty and low season rates may apply
Skies are clear of dust, the park is green, and there are lots of flowers
Many newborn animals
Bird watching is excellent and migratory birds are present
Wildlife viewing is harder as the grass is long and animals disperse
April can be very wet and rain might interfere with your game drives
Some roads can become very bad after heavy rain

It is hot, sunny and dry. It seldom rains and humidity is very low. The temperature peaks in October but the first rains break the heat and bring relief.
June, July, August & September – It is mostly sunny and there is no rain at all. Afternoons are hot with temperatures reaching 31°C/88°F, but evenings and early mornings are cooler with temperatures of around 16°C/61°F.
October – Temperatures increase and it gets extremely hot before the rain breaks the heat. Average afternoon temperatures are about 33°C/91°F, but it peaks a lot higher. When the rain finally comes, it is a huge relief after the long Dry season.

The wet season is divided into three parts: the ‘short rains’ from November to December; the ‘long rains’ from March to May; and a dry period in between. Aside from April and November, rain figures aren’t very high.
November & December – The rain might start in October or November. November is usually the peak of the short rains. Temperatures tend to build up before the rain and drop immediately after. Average afternoon temperatures reach up to 32°C/90°F.
January & February – This is a dry spell in the wet season. These are the hottest months with an average temperature of 34°C/93°F.
March, April & May – These months see the long rains. April is by far the wettest month and roads can become impassable. The rain dwindles in May, but roads might be bad until late May. Afternoon temperatures are around 33°C/91°F.

Meru National Park is located 355km/220mi northeast of Nairobi and 60km/37mi east from Meru town. Many people visit Meru by 4x4 on an organized safari while visiting several other parks. However, there are daily scheduled flights from Nairobi to one of two airstrips inside the park. It is also possible to organize a private charter from any other park, or Nanyuki. The distance from Samburu NP is about 150km/93mi and the driving time is about 2½ hours.