Mgahinga protects the Uganda slopes of the majestic Virungas, a range of freestanding volcanoes that rises to a maximum altitude of 4,507m on the border with Rwanda and the DR Congo. It is an alternative destination to Bwindi for mountain gorilla trekking. Other attractions include hikes to the summit of three of the park’s volcanic peaks and golden monkey trekking.

Mountain gorilla trekking
Fantastic scenery with views of volcanic peaks
Activities include hiking to volcanic peaks, golden monkey trekking, Batwa cultural trail and caving
Easier to obtain last minute permits here than in Bwindi
The short final access road is rough at all times
Gorilla trekking permits are expensive (but cheaper than in Rwanda)
Only one habituated gorilla troop

Mgahinga is best known as an alternative destination to Bwindi for mountain gorilla trekking, but it also offers good birding, and an opportunity to spent time with the localized golden monkey. The Nyakagazi group is the only habituated gorilla troop here. This means only eight permits a day are available resulting in a very exclusive experience on the day of trekking.

The Nyakagazi group of mountain gorillas is notable for incorporating four sibling silverbacks. A troop of habituated golden monkey, which is endemic to the Albertine Rift and more-or-less restricted to the Virungas, can also be tracked. Bushbuck and buffalo are quite often encountered, while other more secretive resident mammals include golden cat, side-striped jackal, giant forest hog, bushpig and elephant.

Not much research has been done so far regarding the birds of Mgahinga, but the park is still of great interest to birdwatchers. Over 180 bird species have been recorded, and several are localized forest birds – 12 of which are considered endemic to the Albertine Rift (birds restricted to this area). There are several guided mountain hikes on offer where birders get an opportunity to tick of some Afro-alpine endemics such as the scarlet-tufted malachite sunbird. Migratory birds are present from November to April.

Mgahinga Gorilla NP is open for gorilla trekking the whole year, but the best time is during the drier seasons from June to August and December to January. At this time the trails tend to be easier to navigate and spending a precious hour with the gorillas might be more pleasant when it isn’t raining.

June to August and December to January – Dry Season

February to May and September to November – Wet Season

Gorilla can still be tracked at this time of the year
Migratory birds are present
When the clouds lift, the views are amazing
Wet trails are hard to hike, and road conditions can become bad
It might drizzle for days, and it tends to be misty and wet
Hailstorms are common

Mgahinga experiences no real Dry season, so rain is always possible, but there tends to be less rainfall in December to January, while June and July receive the least amount of rain. There are two recognizable Wet seasons: from February to May and from September to November. It is advised to pack decent hiking shoes and waterproof clothing.

Dry Season – June to August and December to January

June, July & August – Generally the driest time, but rain is still possible. This is an excellent time for gorilla trekking. Daytime temperatures average 20°C/68°F, with an average of 8°C/46°F at night.
December & January – Rainfall is lower than in the Wet seasons but higher than June, July and August. Temperatures will be around 21°C/68°F during the day but will differ depending on altitude.
Wet Season – February to May and September to November
February, March, April & May – Rainfall peaks in April. The road to Mgahinga can become tough to travel, and a 4WD is necessary. Hiking wet forest trails can be difficult. The park tends to be covered in mist, and hailstorms are not uncommon.
September, October & November – These months are comparable to February to May. Average temperatures will hover around 20°C/68°F in the afternoon and 9°C/48°F at night.

Mgahinga Gorilla NP lies 14km from the small town of Kisoro along a rough ascent road (allow 45 minutes). A 4WD vehicle is recommended for this road at all times and is essential in the Wet seasons (from February to May and September to November). The park is 510km/317mi from Kampala (at least nine-hours’ drive) and it can be reached by road from Queen Elizabeth NP (around six hours) or Lake Mburo NP (five to seven hours).

Your point of entry into Uganda is Entebbe International Airport (EBB), located about 46km/29mi from the capital, Kampala. It is possible to take a domestic flight from Entebbe to Kisoro. 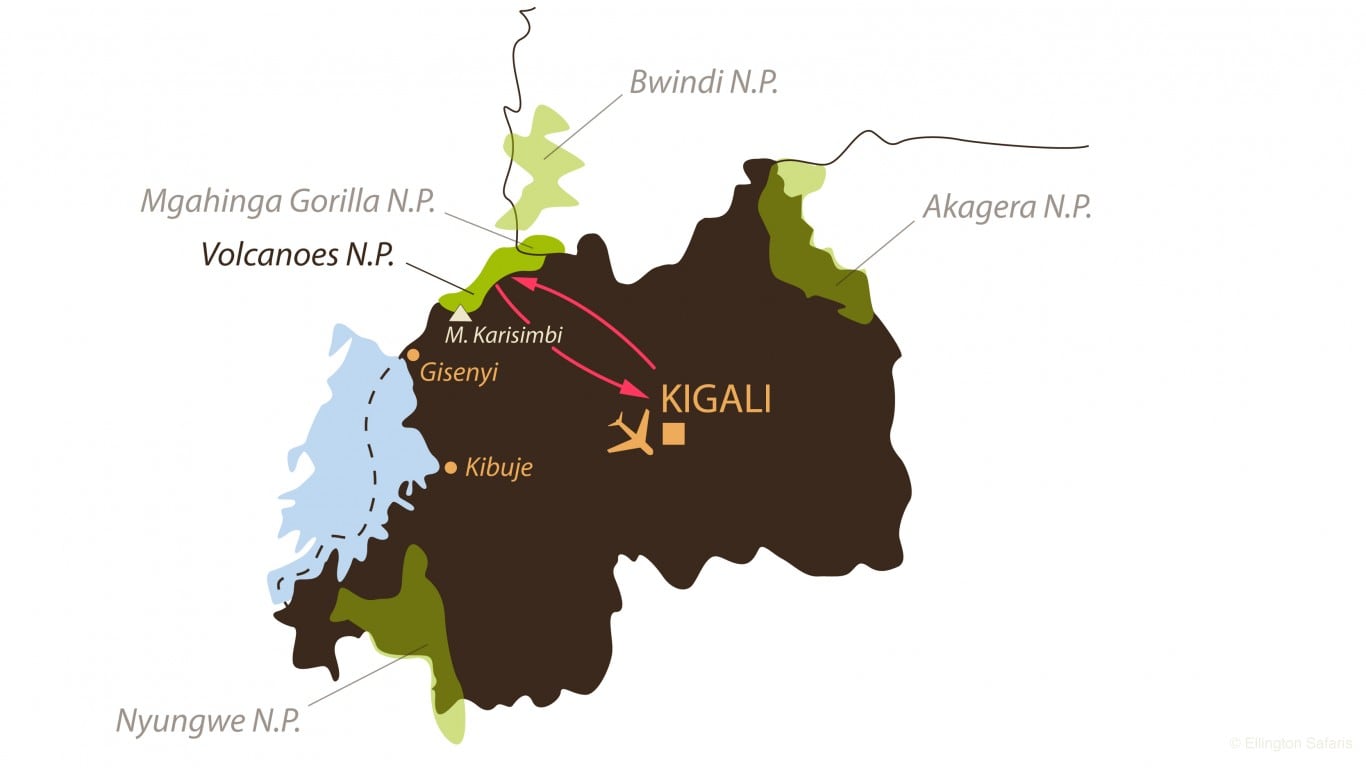