The open horizons and abundant wildlife of the Mkata Floodplain, the popular centerpiece of Mikumi, is often compared to the more famous Serengeti Plains. At the end of the Dry season the waterholes, including the hippo pool, become a wildlife magnet and huge herds of elephant and buffalo visit these spots throughout the day. 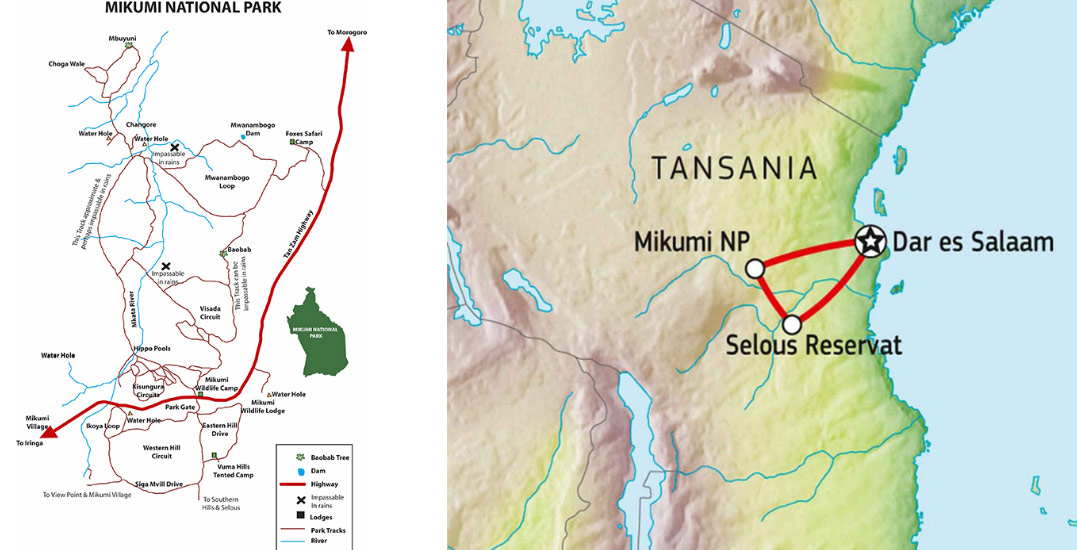 Good sightings of less common antelope such as eland, greater kudu and sable
Guided walks available
Excellent well-priced mid-range lodges
En route to popular parks in the south such as Selous and Ruaha
Suitable for a weekend get-away from Dar es Salaam
Only one-road circuit accessible to visitors
Lack of wilderness appeal with the Tanzam highway running straight through the park
Animals are scattered during the Wet season
Some lodges are closed from March to May
The park can get busy at weekends

Zebra, wildebeest, impala and buffalo can be found on the grassy plains. Lion, which prey on these animals, share the same area and can occasionally be spotted. Giraffe browse leaves from the isolated acacia trees that fringe the Mkata River. The small islands of shade provided by these acacias are also favored by elephant.

Mikumi is one of the most reliable places in Tanzania for sightings of the eland, the world's largest antelope. The equally impressive greater kudu and sable antelope can be found in the miombo woodland-covered foothills of the mountains that rise from the park's borders. The Lichtenstein's hartebeest is one of the more unusual antelopes found here.

More than 400 bird species have been recorded, with such colorful common residents as the lilac-breasted roller, yellow-throated longclaw and bateleur eagle, joined by a host of European migratory birds from November to April. The hippo pool and Mwanambogo dam are a good place to see some of the water-associated birds like African fish eagle, African spoonbill and hamerkop, and the Mkata river offers great views of African openbills fishing.

Wildlife viewing in Mikumi is fine throughout the year, but the best time is from late June to October (the Dry season). At this time vegetation is thinner, and animals gather around waterholes. The end of the Dry season (September and October) is particularly rewarding as big herds of animals come to drink at the last sources of water.

Wildlife is easier to spot as vegetation thins out, and animals concentrate around waterholes and rivers
Abundant sunshine and little rainfall
The risk of catching malaria is less as there are not as many mosquitoes
There is not as much humidity, so the heat seems less severe
There is a lot of dust in the air because it is very dry
Many vehicles at the hippo pool

The scenery is green and lush
Prices may be less, and there are few tourists in the low season of April and May
Birding is at its best as migratory birds arrive
Roads may be washed out and troublesome to use
Wildlife viewing is not as good compared to the middle and end of the Dry season
Wet season is at its height from March to April
It gets humid and hot

The climate in Mikumi varies from warm to hot and humid, with little change through the year. The warmest months are October to March, and the coolest are June to August.

Mikumi’s Wet season runs from November to May. Rains occur almost daily, usually in the afternoon, but seldom last long. The Dry season is from June to October.

Afternoon temperatures are usually around 27°C/81°F. Days are bright and clear.

June, July, August & September – It hardly ever rains. These are the coolest months. Night temperatures drop to about 18°C/64°F.
October – If early, rains might start at the end of October.

November & December – This is the beginning of the Wet season, and the exact start is unpredictable. Rains are infrequent, usually in the afternoon. It is rare for it to rain throughout the day.
January & February – The rainy season is well on its way now, and there will be more rainy days in these months. Still, it’s rare to experience rain all day. Afternoon showers are common.
March, April & May – These are the wettest months. There tends to be cloud cover and rain most days, although seldom for the whole day. The average temperatures range from 28°C/82°F for a high and 21°C/70°F for a low.

Safaris to Mikumi usually start from Dar es Salaam, and your point of entry for the country is Julius Nyerere International Airport (DAR). In most cases, your tour operator will pick you up from the airport and handle all further ground operations or domestic flights.

Mikumi is a four-hour drive away from Dar es Salaam and can easily be visited as a weekend get-away. However, most people visit Mikumi en route to Nyerere or Ruaha, the more popular parks in southern Tanzania. The only scheduled flights to Mikumi are with Safari Air Link which offers a daily connection to Ruaha, Nyerere, Dar es Salaam and Zanzibar.

If driving from Ruaha, the distance is about 320km/200mi, and the drive takes roughly five hours