Although Mkomazi doesn't offer as much wildlife viewing when compared to other parks in Tanzania, the wild scenery compensates for it with mountains rising in every direction. The park shares its northern border with Kenya’s vast Tsavo West National Park and migratory herds of elephant, zebra and oryx travel between these parks depending on rainfall patterns.

Wildlife in the park is thinly populated and quite skittish. Animals that are regularly seen on a game drive are giraffe, dik-dik, zebra, wildebeest, Grant's gazelle, eland and topi. Herds of fringe-eared oryx can sometimes be seen on the plains, and Mkomazi is a Wet-season sanctuary for elephants coming from neighbouring Tsavo.

Black rhino and wild dog have been re-introduced, but both are held captive for security. Other wild dog packs sometimes roam the area. The odd-looking gerenuk is sometimes found browsing while standing on its hind legs. Lesser kudu is another special antelope that can be found in the thicker bush.

Mkomazi is a fantastic destination for bird watchers. It has more than 450 bird species recorded, among them northern dry-country specials such as Shelley’s starling and three-streaked tchagra. It is also the only place in Tanzania where you are likely to see the striking vulturine guineafowl. Large ground birds such as ostrich, kori bustard, secretary bird and southern ground hornbill are all quite common on the grassy plains. Migratory species such as European roller are present from November to April.

Late June to October is the prime time for watching wildlife in Mkomazi National Park. This is the Dry season; vegetation is thinner and animals gather near water. However, elephants and some other herbivores migrate to the park from neighboring Tsavo NP during the Wet season months from November to May. The general scenery and mountain views are better at this time as well.

Animal spotting is easier as wildlife stays near water and vegetation thins out
Sun-filled days with little chance of rain
Mosquitoes are fewer, so catching malaria is less of a risk
It tends to be hazy, and the surrounding mountains are less visible

The land is beautiful and green
The view of the mountains is clearer
March to May is low season, so prices might be less
Migratory birds have arrived, so it is a great time for bird watching
Elephants migrate into the park
Some roads become impassable during the rains
The grass is very long so wildlife is more difficult to spot

The climate in Mkomazi is usually dry and warm to hot. The warmest months are October to April, and the coldest months are May to September.

There are two Wet seasons. The ‘long rain’ are from March to May, and the ‘short rains’ are from November to December. Rains are very frequent during the rainy season but generally do not last all day.

June, July, August, September & October – The daytime weather is clear, bright and sunny. Afternoon temperatures of around 27°C/81°F are common. It cools off at night with minimum temperatures around 16°C/61°F. There is almost no rain in this period.

November & December – 'Short rains' – Sometime between the months of November and December comes a period of rain. These rains aren't likely to impact your trip negatively, as it is uncommon for it to rain all day long. Afternoon showers are more likely.
January & February – There tends to be a drier spell with less rain between the short and long rains. The exact timing is uncertain.
March, April & May – 'Long rains' – It rains with more frequency although not often for the whole day. These months are the wettest, and the most cloud-covered. The humidity is heightened, and it might feel very hot.

The best way to get to Mkomazi is by road from the town of Moshi or Arusha. 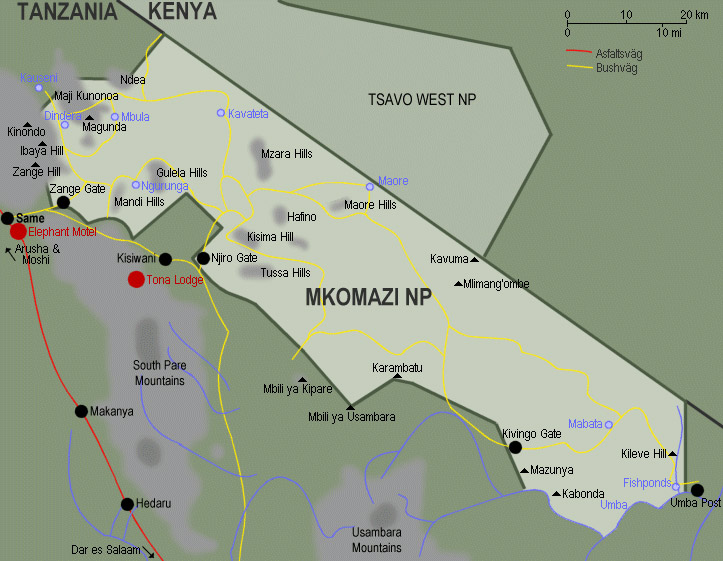 Mkomazi is right next to the small town of Same, which is a comfortable 112km/ 69mi drive south from Moshi. Mkomazi lies a bit out of the way as compared to the other parks in northern Tanzania but could be visited en route to the Usambara Mountains.