Mudumu is a great travel destination for adventurous safari-goers in the Zambezi Region. The park has suffered from heavy poaching but is recovering slowly. Wildlife densities are still low, but a good variety of resident and migrating animals make a visit worthwhile. Expect to see good herds of elephant and buffalo as well as a variety of antelope. Self-drive visitors need to be well-prepared. 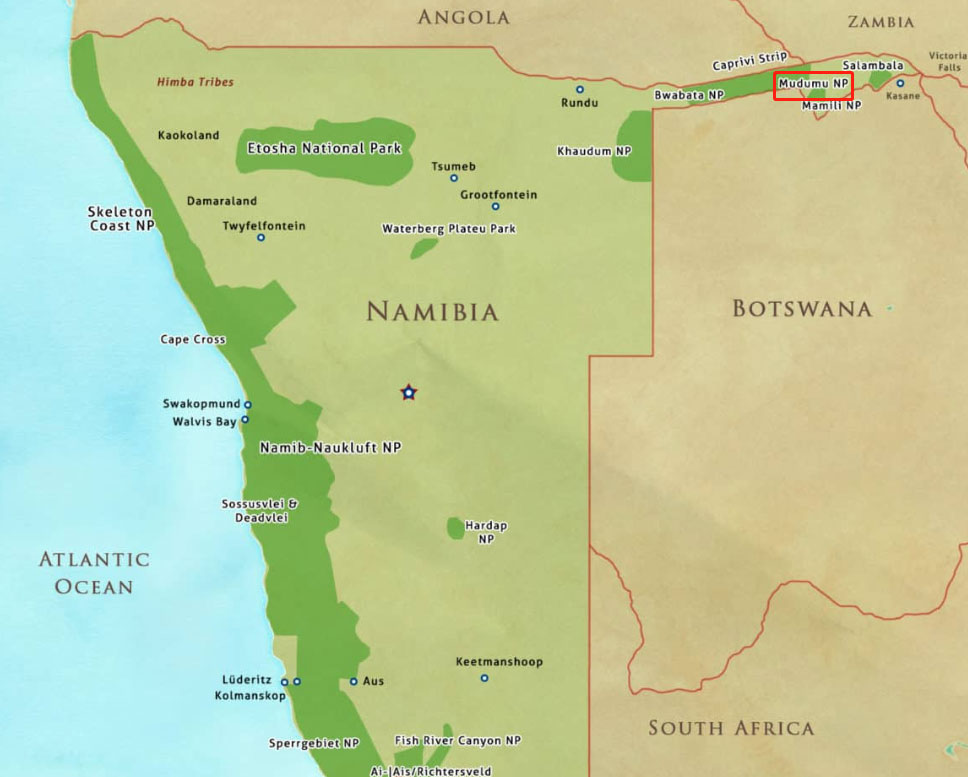 Mudumu in the Zambezi Region has a good variety of animals. Vast herds of elephants and buffalo are often encountered. Other big safari animals include giraffe and zebra. Hippo and crocodile can be found in the river. Lion is the most visible of the big cats, although encounters are hit-and-miss. Wild dogs occasionally pass through the park.

A large part of the park’s habitat consists of wetland, which is home to the elusive, semi-aquatic sitatunga antelope. Red lechwe is also an inhabitant of marshy areas and is more abundant. Aside from these highly specialized antelope, many other unusual species can be spotted, including sable antelope, which likes to stay in thick woodland areas.

Mudumu offers first-rate bird watching. The variety of habitats (the wetland especially) is a magnet for birdlife; over 400 bird species have been recorded. The Kwando River attracts colonies of the colorful carmine bee-eaters in the summer months as well as the rare coppery-tailed coucal. Flocks of African skimmers can be seen flying over the water and a pair of African fish eagle, bellowing their distinctive calls, is never far off. Migratory birds are present from November to April.

Mudumu is best visited during the Dry season, from June to September. During this time the foliage shrinks, accommodating better wildlife viewing. As water dries up in the bush, permanent water sources attract wildlife and this makes it easier to find animals. In the Wet season, animals tend to spread out among the thicker vegetation, making wildlife-watching more difficult.

May to September – Dry Season

Animals are less scattered and vegetation shrinks, making wildlife viewing easier
The weather is warm and the heat isn’t overbearing (except October)
Regardless of the season, high or low, the park is never crowded
Dry conditions make for hazy skies, full of dust

Rain is very refreshing after the long dry winter
The scenery is beautiful, flowers are abundant and the air is clear
Animals are healthy, and their newborns can be seen
Peak birding season with the arrival of migrant species
The heat can be oppressive
Animals scatter, making wildlife viewing more challenging

Mudumu’s climate is hot and predominantly dry. When rainfall occurs, it is generally in the form of afternoon thunderstorms. November to April (summer) signifies the Wet season, while the winter months of May to October represent the Dry season.

These are the coolest months and the mornings in particular get cold. Rain is virtually non-existent throughout this period.

May, June, July & August – Plenty of sun and dry weather is typical. Afternoon temperatures usually hover around 27°C/80°F, but mornings get quite cold with temperatures averaging 8°C/47°F. Warm winter clothing is essential for early morning game drives.
September & October – Warmth increases in September. Early morning temperatures of 15°C/59°F are common. October is the hottest month, and temperatures average 35°C/95°F, though it will frequently spike higher. The rains usually begin toward the end of October or early November.

The summer months are hot and with the heat comes the Wet season. Rainfall is not particularly high, but afternoon showers do occur. Most days are sunny and mornings are mild.

Novermber & December – The rains usually begin in late October or early November and bring relief from the dry conditions. Most of the day will be dry, but afternoon thundershowers are common. Daily temperatures average 32°C/90°F.
January, February & March – The most precipitation of the year falls during January and February, with afternoon showers becoming common. Daytime temps hover around 31°C/88°F and drop a bit after rainfall.
April – April sees a dramatic decrease in rainfall and temperatures begin to slowly drop as summer comes to an end.

By car, Mudumu is approximately 1,150km/715mi from the town of Windhoek. Found within the Zambezi Region, it is mostly visited on a self-drive safari. The road conditions are often poor and sometimes unnavigable.

Most visitors enter Namibia via Hosea Kutako International Airport (WDH) located 40km/25mi east of Windhoek. This is where you should rent your 4x4 if driving yourself. You may decide to forgo driving altogether and choose a fly-in trip comprised of charters between various parks and lodges. Lianshulu Lodge, located inside the park, has a private airstrip.