Murchison Falls NP, part of the greater Murchison Falls Conservation Area (MFCA), Murchinson Falls is the name that was given to the point at which the world’s longest river, the river Nile, is channeled through a narrow gorge within the Rift Valley, descending almost 50 metres below.. The Victoria Nile bisects the park and boat trips to the spectacular Murchison Falls are a highlight – especially if you hike to the top where the immense power of the Falls is best appreciated.1980s. Together with the adjacent 748 square kilometres (289 sq mi) Bugungu Wildlife Reserve and the 720 square kilometres (280 sq mi) Karuma Wildlife Reserve, the entire area is known as the Murchison Falls conservation area.Murchison is Uganda’s only National Park which has all “big five”. Buffalos, elephants, lions, leopards are best to be seen in the northern part (above the Nile). Rhinos were sadly extinguished but are now being bred again in the rhino sanctuary south of the park; 40 to 50 rhinos are planned to be released into the wild in approx. 30 years.

The park supports four of the Big Five; only rhino are absent. Buffalo and elephant are particularly common. There is a very healthy population of lion that likes to prey on the abundant Uganda kob. Other antelope found here are oribi, Jackson's hartebeest, Defassa waterbuck, grey duiker and bushbuck. The Victoria Nile teems with crocodile and hippo.

Large herds of the localized Rothschild's giraffe are found in the park and leopard, though far from numerous, is most likely to be seen in the vicinity of Pakuba Lodge. Troops of the rare Pata's monkey can sometimes be spotted on the grassy plains and chimpanzee can be tracked in neighboring Budongo Forest.

Murchison Falls NP is one of the best places in Africa to find the prehistoric-looking shoebill stork. Sightings of this bird are almost guaranteed on a boat trip on the Victoria Nile towards the Lake Albert delta. This boat trip, as well as the more popular ‘launch’ trip towards Murchison Falls, are, in fact, great for checking off many water-associated birds. The park’s impressive checklist contains more than 450 species in total. Migratory birds are present from November to April.

Watching wildlife in Murchison Falls National Park is generally good and at its best during the Dry season, from December to February. However, January and February can be very hot and scenery is more beautiful during the Wet season from June to November.

Animals are found more easily since they gather at water sources
Plenty of sun and almost no rain
Mosquitoes are fewer, so there is less risk of malaria
The heat in January and February can be unbearable

The landscape is lush with greenery
April and May are low season, so there are fewer people around, and rates may be lower
The park offers good wildlife viewing throughout the year
Migratory birds can be found
Murchison Falls lies in a dry part of the country, and the rains rarely interfere with your safari
Some roads may become hard to travel after heavy downpours

The climate in Murchison Falls is tropical and hot. Temperatures are quite uniform throughout the year. Daytime temperatures of around 31°C/88°F are common, with it cooling down at night to around 18°C/64°F.

The Wet season runs from March to November, with a drier period from June to July. There is little rain during the Dry season (December to February).

It is dry and hot.

December, January & February – These are the driest months. It is mostly sunny with clear skies. These are also the hottest months, with average temperatures of 33°C/91°F during the afternoon. It cools off at night to about 18°C/64°F. The heat is dry and doesn't feel overly oppressive.

It doesn’t rain that much in the Wet season, but occasional heavy storms can be expected.

March, April & May – By March the rains are starting, and there are more overcast skies. April and May experience more rainfall. Daytime temperatures average 31°C/88°F, while at night they average 20°C/68°F.
June & July – This is a bit of a drier spell, but rain should still be expected. Average daytime temperatures are around 30°C/86°F.
August, September, October & November – These are the wettest months, reaching a peak in October. It doesn't rain every day, but when it does, it tends to be torrential storms. Temperatures start to slowly increase by November.

Murchison Falls NP is located 305km/190mi north of Kampala. The drive to the southern entrance gate takes four to five hours. Coming from the southwest, the 280km/170mi drive from Fort Portal takes at least six hours. Allow another hour or two from the entrance gate to most of the lodges.

It is also possible to fly to the park by chartered or scheduled aircraft service from Entebbe International Airport (EBB) or Kajjansi Airfield near Kampala. Pakuba Airfield is the most convenient point of arrival for the main cluster of camps and lodges around the park headquarters at Paraa. Other options are Chobe or Bugundu.

When flying from abroad, you’ll arrive at Entebbe International Airport (EBB). It is located 46km/29mi from the capital (Kampala). Your local tour operator will usually arrange for you to be picked up at the airport and will take care of all further transportation as part of your safari package. 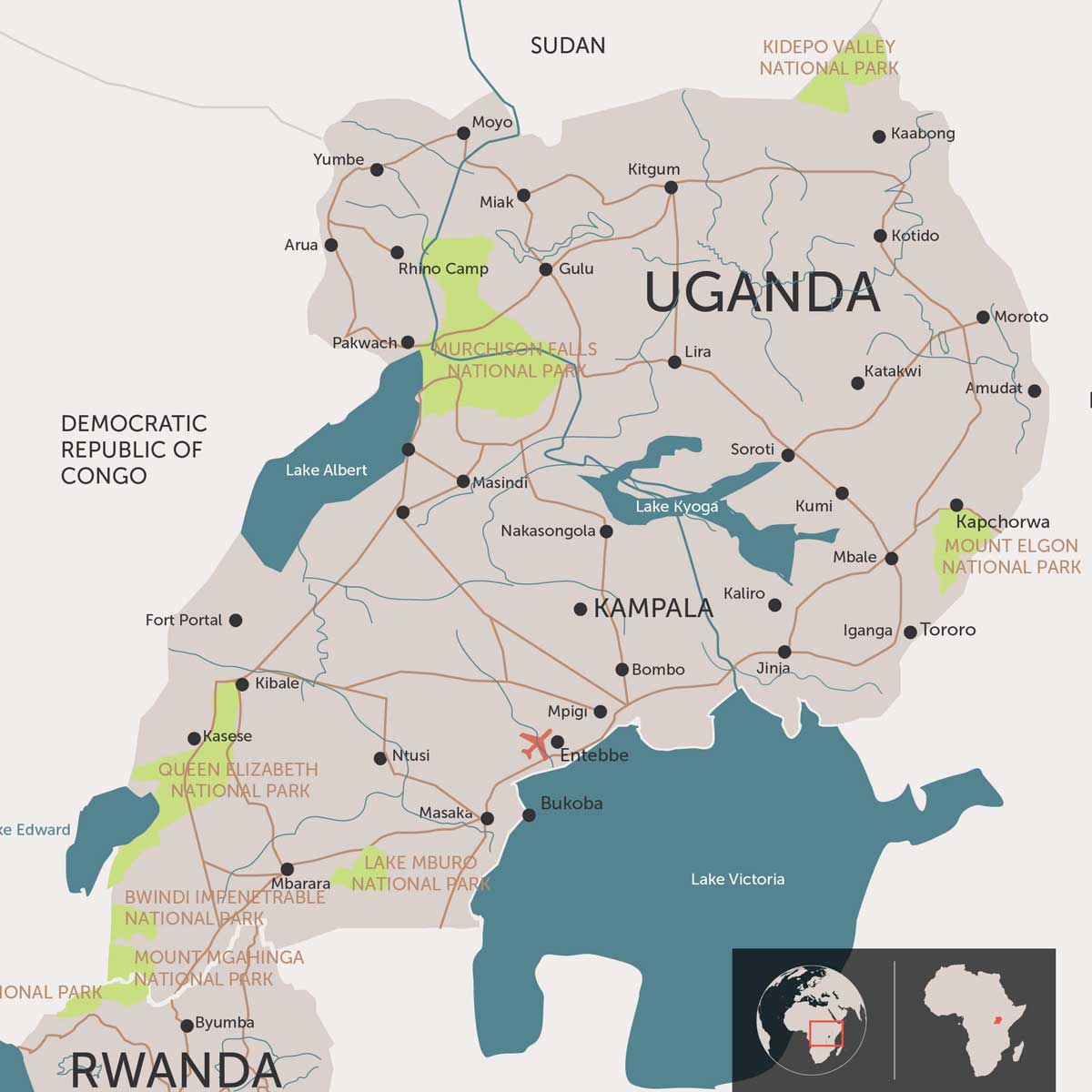