Nairobi National Park lies within sight of Nairobi city, and animals can be seen against a backdrop of high-rise buildings. The park’s proximity to a large urban center is unique in Africa and wildlife viewing is surprisingly good. Most big safari animals are present (except elephants). There is a small walk at the entrance leading through indigenous forest, and several wildlife enclosures. 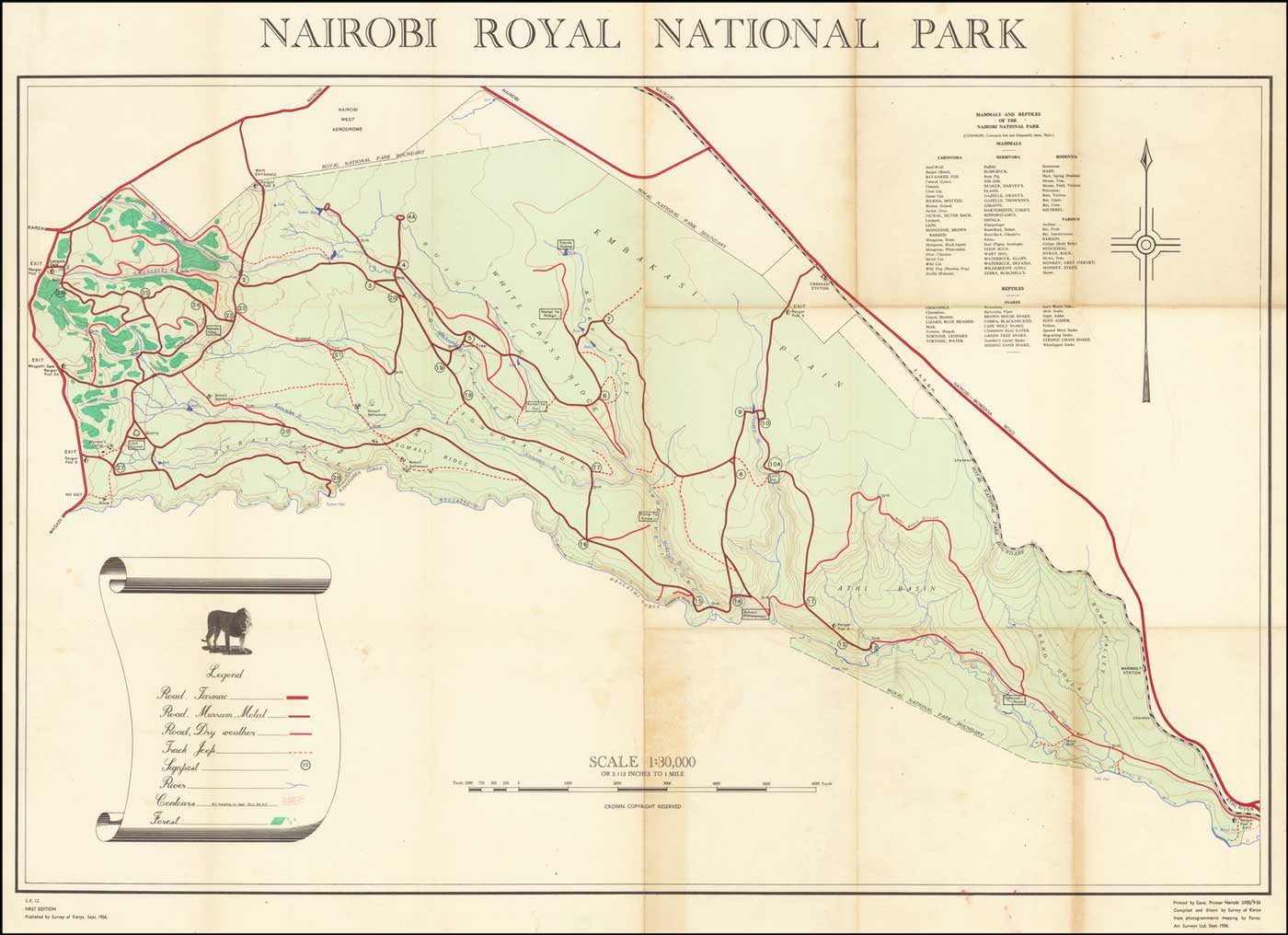 Good wildlife viewing with most safari animals present
Easy day or half-day trip from Nairobi
Interesting photo possibilities with animals against city backdrop
Safari boardwalk with unusual animals, including bongo antelope
Animal orphanage
High density of black rhino
The proximity to the city lacks wilderness appeal
No elephants
Only one lodge inside the par

Nairobi National Park has a good variety of wildlife. Apart from elephants, most big safari animals are present. There is a very good chance of seeing rhino. White rhino are easiest to spot as they graze on the open plains, but the park is one of Kenya’s most successful sanctuaries for black rhino, which like to keep hidden in the thickets.

Lion, cheetah, Masai giraffe and buffalo are just some of the animals you can encounter on a half-day trip in Nairobi NP. It is also a good place to see some of the more unusual antelope species including oribi, a grassland special. Coke's hartebeest is quite common and if lucky, a herd of shy eland will come into view. Pairs of little kirk's dik-dik can be spotted as well.

With over 500 bird species recorded, Nairobi NP probably gives Kenya’s capital the longest bird list of all cities in the world. The park’s substantial area of undisturbed grassland is of great importance for species such as the restricted-range Jackson’s widowbird, which breeds here regularly after good rains. Other grassland birds include ostriches, secretary birds and bustards. Nairobi NP is a popular birding destination and it’s easy to book a full or half day guided birding trip at short notice.

Wildlife viewing is at its finest in the Dry season (when animals can easily be seen around water sources), from June to September, although it’s possible to visit Nairobi NP any time. Wildlife watching is usually more difficult during the long rains (March to May) and the short rains (October to November). During these months, rainfall might restrict game drives and the grass tends to be very high.

March to May – Wet Season

Skies are clear of dust, the park is green, and there are lots of flowers
There are many newborn animals
bird watching is excellent and migratory birds are present
Animals scatter and the grass is longer making wildlife viewing harder
April and May can be very wet and this can affect game drives
Less sunny days
The condition of the roads can be bad after heavy rain

Nairobi has a cool and temperate climate. Temperatures are reasonably constant year-round, and it cools off considerably at night. There is very little rain in the Dry season between June and October. November to May, the Wet season, has two periods of rain. The ‘short rains’ are heaviest in November, and the ‘long rains’ are at their peak in April.

It rains very little in the Dry season, although when the first rains fall is changeable. July and August are the coolest months, and temperatures increase in September through October before the rain breaks.
June, July, August & September – Lots of sunshine with very little rain. Afternoons are pleasant with temperatures around 24°C/75°F, but evenings and early mornings are cold with temperatures of around 12°C/54°F.
October – It is warming up a bit with afternoon temperatures of about 26°C/79°F. The short rains might start towards the end of the month, or it might be later in November. Temperatures drop after the rains.

The Wet season is comprised of three distinct parts: the 'short rains' from November to December and the 'long rains' from March to May, with a dry period separating them.
November & December – 'Short rains': October or November sees the start of the short rains, which normally peak in November. Temperatures increase before it rains, drop immediately after, and average at 25°C/77°F in the afternoon.
January & February – The rains dry up in these months, separating the two rainy seasons. It’s the hottest time of year with average afternoon temperatures of 28°C/82°F.
March, April & May – 'Long rains': April is the wettest month and rain might interfere with your game drives. Road conditions deteriorate. The rain diminishes in May, but the roads may still be problematic until later that month. Afternoon temperatures are around 26°C/79°F.

Nairobi National Park is located 9km/ 5mi south of Nairobi. The park is usually visited as a half-day or full-day trip from a hotel in the city. Getting to the city of Nairobi is easy – it’s one of the biggest and busiest transport hubs on the continent. International flights arrive in Jomo Kenyatta International Airport (NBO), 15km/9mi southeast of Nairobi.