A visit to the Ngorongoro Crater is an experience of a lifetime. There are few places that have wildlife densities and variety on this level. It is not unusual to see the Big Five in one day – and all this in the most amazing setting with a backdrop of the 600m/1,968ft-high crater wall. 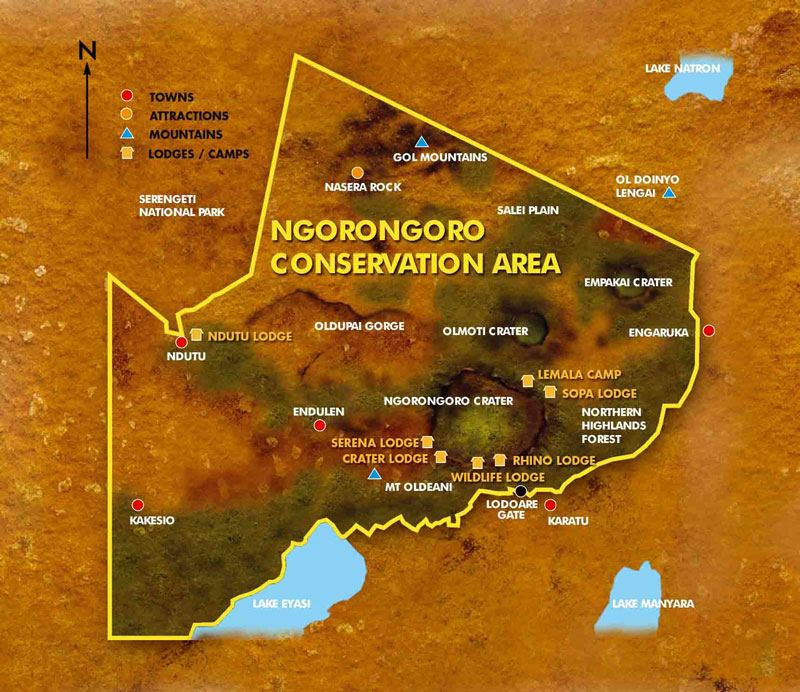 The star attraction of the Conservation Area is the Ngorongoro Crater: an extinct volcano teeming with wildlife. All major animals are easily seen. The only exception is giraffe, which is present in the Conservation Area, but not in the crater because of the steep descent. Elephant are common, including some very big tuskers, and all the big cats are prominent as well.

A real special of the crater is the black rhino. Rhino is hard to see in Tanzania, and usually sticks to thick vegetation. This is not so in the crater, where they have a predictable routine of spending the night in Lerai forest, and the day in open grassland. Black-backed and golden jackal are equally common in the crater and the density of spotted hyena is quite extraordinary.

Both the Ngorongoro highlands and the crater offer excellent birding, with over 500 species recorded. Birdlife in the highland forest is rich and interesting. Among the birds to be seen are white-eyed slaty flycatcher and Livingstone turaco. A number of specialized grassland birds are resident in the crater. Most noticeable are ostrich, kori bustard, crowned crane and the secretary bird. Migratory birds are present from November to April.

Wildlife viewing inside the Ngorongoro Crater is superb at all times. However, grass on the crater floor is short in the Dry season (June through September) and this makes animal spotting easier. The scenery is lush and spectacular in the Wet season months (from November to May).

Wildlife is easier to spot since the grass is shorter in the Dry season
Rain is little to none and sunshine is abundant
Chances of contracting malaria are slimmer, as there are fewer mosquitoes
The Ngorongoro crater gets very crowded
Mornings and nights get very cold

Ngorongoro Crater offers excellent wildlife viewing, even in the Wet season
The scenery is green and beautiful
Low season occurs in April and May – tourists are fewer, and there may be better rates
Birding is in its prime due to the presence of migratory birds
Except for in March and April, rains are mostly short afternoon storms and seldom interfere with your trip
March to May is the peak of the Wet season
It is cold during the nights and mornings, so it is important to pack warm clothing

Ngorongoro CA has a mild, temperate climate. The area experiences two Wet seasons. From October to November are the 'short' rains, followed by the 'long rains' from March to May. Rainfall is usually experienced in the form of short showers. The crater never gets very hot during the day, but the crater rim gets cold, and it can freeze at night. Warm clothing for early morning game drives is a necessity.

June, July, August, September & October – Afternoon temperatures are usually around 19°C/66°F on the crater floor. Sunny, cloudless skies are normal, but if the 'short rains' arrive early, they could begin in October. It gets cold at night, and it can freeze on the crater rim.

November & December – 'Short rains' – These rains are highly unlikely to impact your safari as it won't rain all day. Showers usually happen in the afternoon. The 'short rains' last about one month and can occur anytime between October and December.
January & February – It isn't possible to guess when it will happen with accuracy, but there is usually a time of dry weather between the Wet seasons.
March, April & May – 'Long rains' – It often rains, but it rarely lasts the entire day. April and May could experience very chilly conditions due to cold fronts.

Most people will visit the Ngorongoro Conservation Area as part of a bigger package, including a visit to the Serengeti. Conveniently, the conservation area lies en route and is only a three-hour drive on tarred road from the town of Arusha, the starting point of all safaris in northern Tanzania.

From Arusha, you can hop around the parks of the northern circuit by small aircraft on chartered or scheduled flights, or you can drive and do the whole circuit by safari vehicle. A popular option is to fly into the Serengeti and make your way back by safari vehicle via the Ngorongoro crater, or the other way around. In most cases, your tour operator will pick you up from the airport.

Coming from the Seronera area in the Serengeti, the distance to the crater is about 140km/90mi and the driving time is about three hours. This can obviously take much longer allowing for wildlife viewing along the way. The 80km/50mi drive from Lake Manyara to the Ngorongoro Crater takes about two hours, and the 180km/110mi drive from Tarangire takes about four hours.