Queen Elizabeth National Park is Uganda’s most popular savannah reserve and has the widest variety of wildlife of any Uganda park. The variety of habitats includes grassland savannah, forests, wetlands and lakes. This provides the setting for an extensive range of large mammals and primates. Four of the Big five are present (rhino are absent) and chimp tracking is available.

Elephant and buffalo are very common, and lion are surprisingly easy to spot. There are many interesting antelope species such as Uganda kob, topi and bushbuck. Hippo and crocodile are common in Kazinga channel. A troop of chimpanzee has been habituated for tracking and nine other primate species are found, including the black-and-white colobus monkey. Giraffe and zebra are absent.

Tree-climbing lions are a specialty of the Ishasha sector of the park, where they can often be found resting in huge fig trees. Giant forest hog, is unusually easy to see, both on drives and boat trips. Buffalo are particularly attractive as they are often reddish brown due to interbreeding with forest buffalo from neighboring Congo. Chimp trekking is available in the steamy, tropical forest of Kyambura Gorge.

Queen Elizabeth NP has the largest checklist of any protected area in East Africa with over 600 bird species recorded. This is mostly due to the wide variety of habitats: from savannah to forest to wetland. Many of the birds in the park are regarded as specials within East Africa, which makes it a prime birding destination. The swamps in the Ishasha sector are a good place to look for the elusive shoebill stork. Migratory birds are present from November to April.

Queen Elizabeth National Park is open all-year-long, but wildlife viewing is at its best from January to February and June to July (the Dry seasons). However, this scenic park is at its most beautiful in the Wet seasons from March to May and August to December. April, May, August and September are very wet months and during that time, the rain might interfere with your safari.

January to February and June to July – Dry Season

Wildlife is easier to spot as vegetation thins, and animals gather around water sources
Drier trails make chimp trekking easier
Sunny days are plentiful
The best time for birding is late May to September
Views aren't as good due to the hazy air

March to May and August to December – Wet Season

You will see a decent amount of wildlife year-round
The landscape is beautiful and green
Migratory birds can be spotted
Roads may become inaccessible after heavy rains and forest trails get slippery
Afternoon thunderstorms should be expected, and it might drizzle for days at a time

The climate in Queen Elizabeth NP is warm. Temperatures remain uniform through the year. Daytime temperatures rise to around 29°C/84°F and slowly fall to around 17°C/63°F at night. Queen Elizabeth NP doesn’t have a real Dry season, so there is always potential for rain. Rain happens less during December through January, with June and July having the least rain.

Dry Season – January to February and June to July

Wet Season – March to May and August to December

March, April & May – Rain peaks in April during this time of increased rainfall. Temperatures are pleasant (around 29°C/84°F) in the later afternoon and cooler (17°C/63°F) in the morning. Roads can become impassable and trails used for chimp tracking get slippery.
August, September, October & November – This time of year is similar to March through May, with rain peaking in November.

Queen Elizabeth NP is located about 410km/255mi north of Kampala. The direct drive takes at least seven to eight hours, but your itinerary will most likely include some parks on the way. It is also possible to fly to any of the nearby airstrips of Kasese, Mweya or Kihihi (for Ishasha) by scheduled or chartered aircraft from Entebbe International Airport or Kajjansi Airfield near Kampala.

You will enter Uganda at Entebbe International Airport (EBB), about 46km/29mi from Kampala, the capital city. Generally, your tour operator will arrange for your pick-up from the airport, and organize any further transportation required as part of your safari package. 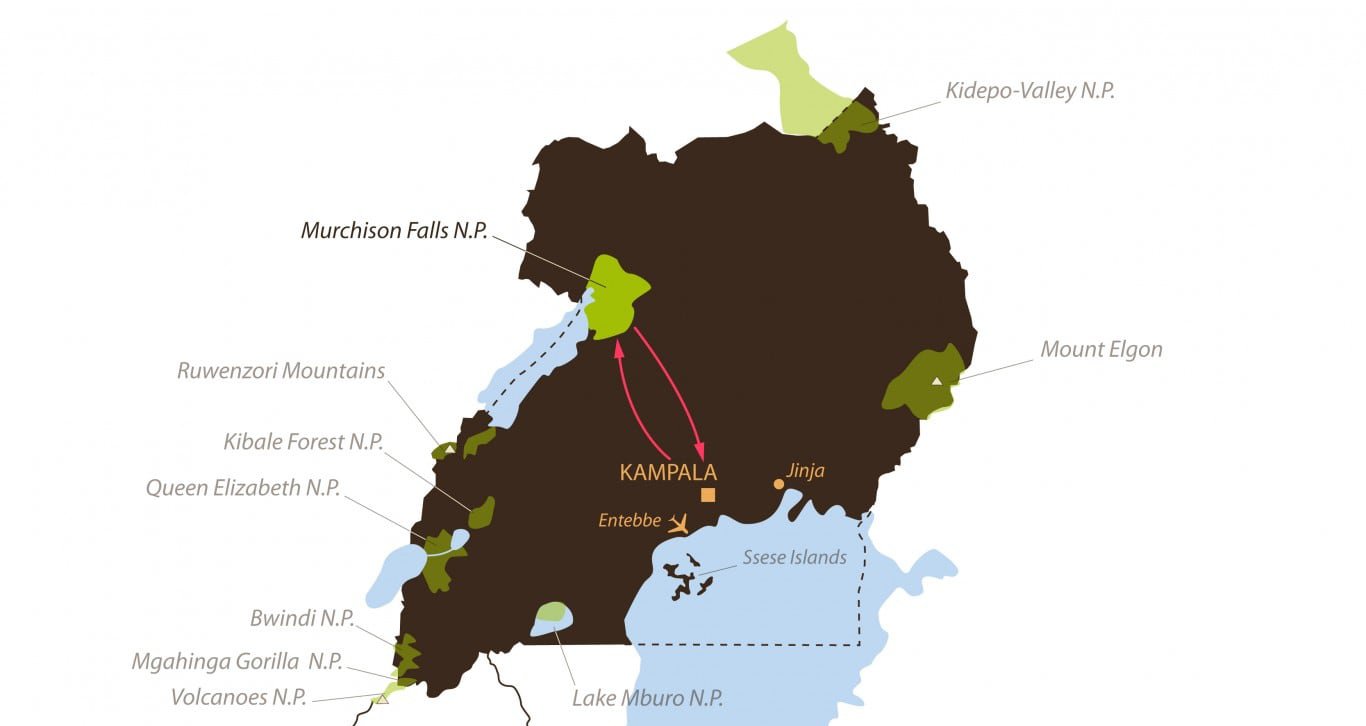