Ruaha is now Tanzania’s largest national park and offers excellent wildlife viewing. It is particularly good for spotting predators, including very large prides of lion and the endangered wild dog. Elephants and a big variety of antelope species are another big draw to the park. It also has outstanding wilderness appeal, with limited exclusive, luxury camps available. 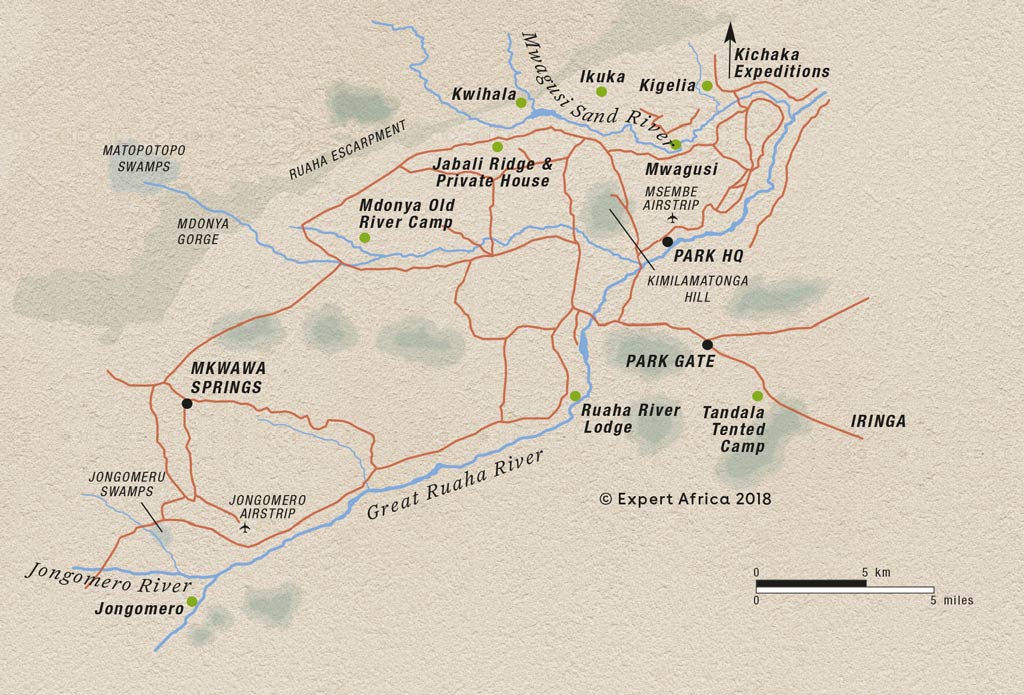 Top wildlife viewing in the Dry season
Guided walks available
Superb for spotting predators, including big prides of lion
One of the best places in East Africa to encounter wild dog
Unusual antelope species such as greater kudu, roan and sable
Very exclusive and it doesn't get crowded
Balloon safaris from mid-June to October
Relatively remote and there are very few budget options
Animals are scattered during the Wet season
Most lodges are closed from March to May

Remote Ruaha is an unspoiled wilderness famed for its large number of elephant. In fact, aside from rhino, all major safari animals are present in good numbers. Large prides of lion, sometimes counting more than 20 individuals, roam the park and even buffalo, an unusual prey, isn’t safe here.

One of the park’s key attractions are the wild dogs. There are only a handful of places where these charismatic pack animals are easily observed, and this is one of the best. Ruaha is also home to the largest population of greater kudu in East Africa. Other rare antelope species that can be seen here include lesser kudu, roan and sable antelope.

Ruaha's great diversity of birds is a function of its location, which is transitional to the acacia savannah of East Africa and the miombo woodland belt of southern Africa. The park has a checklist of 450 birds. The crested barbet – whose persistent trilling is a characteristic sound of the southern bush – occurs in Ruaha, alongside central Tanzanian endemics (restricted to Central Tanzania) such as the yellow-collared lovebird and ashy starling. Migratory birds are present from November to April.

The middle and end of the Dry season (June to October) is the prime time for watching wildlife in Ruaha National Park. Animals are easier to spot because the bush thins out and wildlife concentrates around trusted water sources.

Wildlife viewing is easier since the bush thins out and animals gather around rivers and waterholes
Skies are bright with almost no rain
Malaria risk is at a minimum since the numbers of mosquitoes are less
The heat is less overpowering, and it is not as humid
Dust and dryness is common
Many accommodations are closed in May

The scenery is green and full
Tourism is less during April and May which means fewer crowds and better rates
The arrival of migrating birds means bird-watching is at its finest
Roads could become impassable
Wildlife viewing is not as good as during the middle and end of the Dry season
Heat is high, and it becomes steamy and damp
Many accommodations are closed in April

Ruaha is hot and dry. Temperatures don’t vary much throughout the year. The warmest months are October to March, and the coolest are June to August.

The Dry season occurs from May to October. Ruaha has one extended Wet season from November to April. Afternoon thunderstorms are common, but it is unusual for rainfall to last throughout the day.

November & December – The rains usually start in November. It doesn’t often rain all day; showers are mostly in the afternoon. The temperatures increase just before the rain starts, and peaks of over 38°C/100°F are not unusual.
January, February & March – Like previous months, it is highly unlikely for rains to last the whole day, but they will be more plentiful – usually in the afternoon. Daytime temperatures average 28°C/82°F, while night and early morning average 17°C/62°F.
April – The rains will slow down, as this is the end of the Wet season. Temperatures average between 28°C/82°F and 17°C/63°F.

Safaris to Ruaha usually start from Dar es Salaam, and your point of entry for the country will be Julius Nyerere International Airport (DAR). In most cases, your tour operator will pick you up from the airport and handle all further transportation.

The drive to Ruaha from Dar es Salaam takes about 10 hours, and a lot of it is on a dusty, bumpy road. Many people traveling to Ruaha make a stopover at Mikumi NP. From Mikumi, the distance to Ruaha is about 320km/200mi, and the drive takes roughly five hours.

The easier way to get to Ruaha is by chartered or scheduled flight from Dar es Salaam to the park's airstrip. There are also flights connecting all parks of the southern circuit safari.

In this case, flights will leave from the airstrip in Nyerere or Mikumi. Flights from Arusha town, the base for the northern safari circuit, are also available. Coastal Aviation also offers direct scheduled flights between Serengeti NP and Ruaha NP.