Saadani is where the beach meets the bush. It is the only park in East Africa with an Indian Ocean beachfront. It’s the one place where those idle hours of sunbathing might be interrupted by an elephant strolling past, or animals coming to drink at the nearby waterhole. Also, a sight to behold are the Swahili fishermen casting their nets at sunrise. 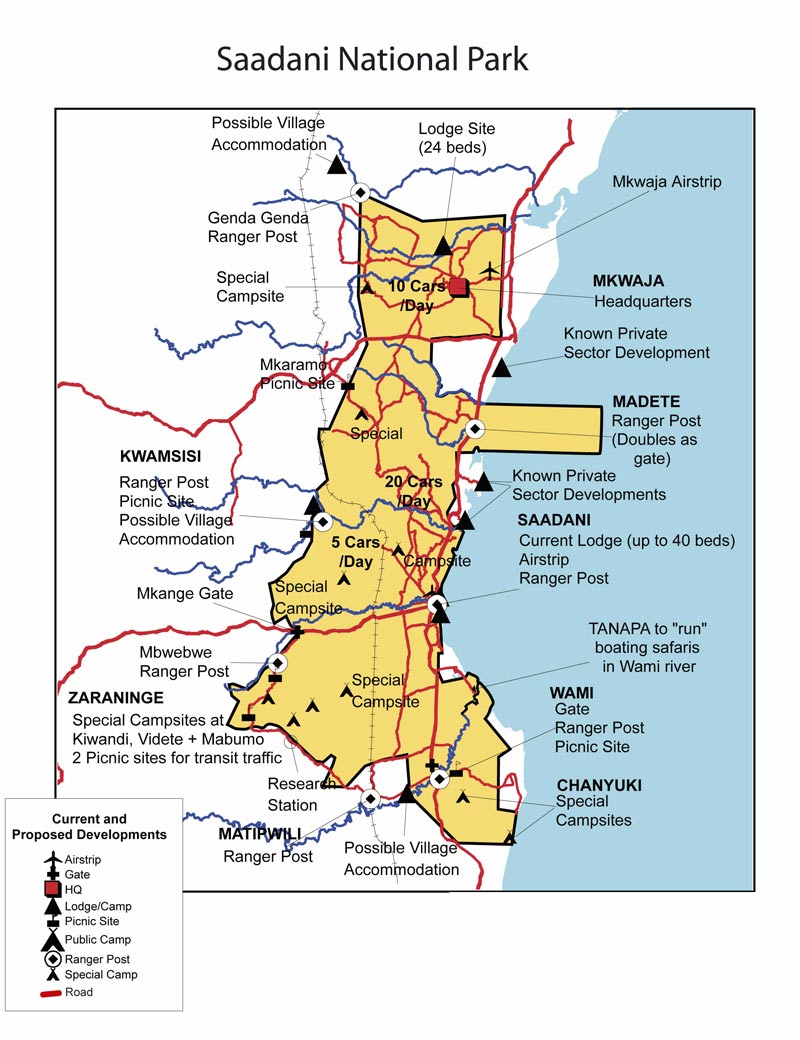 Combination of beach and bush
Perfect beach destination for people who prefer a bush environment to a typical beach holiday-resort
Closest wildlife viewing destination to Zanzibar, connected by daily flights
Guided walks and boat trips available
Most of the major safari animals aren't present or easily seen
The wildlife-viewing circuit is small
Lack of wilderness appeal with human settlements all around

Although the park has been hit hard by poachers in the past, wildlife numbers are increasing. Animals you are likely to encounter on a drive are giraffe, buffalo, warthog, common waterbuck, reedbuck, Lichtenstein's hartebeest, wildebeest, greater kudu, eland, yellow baboon and vervet monkey. Herds of up to 30 elephant are occasionally seen.

Saadani harbors a small population of Roosevelt's sable, an endangered species found otherwise only in Nyerere and Kenya's Shimba Hills. Another coastal special is the red duiker. The beaches in and around Saadani form one of the last major breeding sites for green turtle in Tanzania. Boat trips on the mangrove-lined Wami River come with a high chance of seeing hippo, crocodile and a selection of marine and riverine birds.

Saadani offers excellent birding in a variety of habitats. Boat trips on the mangrove-lined Wami River offer a good selection of marine and riverine birds, including the mangrove kingfisher and lesser flamingo. The interior of the park is great for seeing some of the grassland species, and a variety of raptors such as bateleur and crowned eagle. Migratory birds are present from November to April.

The best time for watching wildlife in Saadani is after the rains, in January and February, and from June to August, when there is still plenty of water on the plains and wildlife stays within the park. As a general bush/beach break destination Saadani is good to visit most of the year, except during the peak of the rains from April to May.

Animal densities are higher from June to August after the rains
Sun is prevalent while rain is rare
Mosquitoes are fewer, so the risk of malaria is lower
Animals move out of the park at the end of the Dry season when the water on the plains has dried out

Being located close to the equator and on the coast of the warm Indian Ocean, Saadani experiences tropical climatic conditions. There are two Wet seasons. The ‘long rains’ (March to May) and the ‘short rains’ (October to November). Thunderstorms are common during the afternoons in the Wet season, but it seldom rains all day. Average temperatures stay high year-round.

June, July, August & September - It’s mostly sunny and rain is at a minimum. This is the coolest time of the year. Afternoon temperatures average 31°C/88°F. It cools off at night with temperatures of 21°C/70°F at the lower end of the range.

October, November & December – 'Short rains' – A rainy period lasting about a month generally happens within this time. However, it isn’t possible to know exactly when. Short afternoon rains are likely but will rarely extend through the day, making it unlikely to affect your trip.
January & February – A spell of dry weather, the timing of which cannot be predicted, occurs between the two Wet seasons.
March, April & May – 'Long rains' – It rains almost every day, but it would be unusual for it to last all day. Heat becomes a burden, and the humidity is high, although an ocean breeze does a lot to alleviate this.

Your entry point in Tanzania is usually Julius Nyerere International Airport (DAR) near Dar es Salaam. In most cases, your tour operator will pick you up from the airport and handle all further ground operations or domestic flights. Chartered flights from Arusha town, the base for the northern safari circuit, are also available.