The Skeleton Coast is a windswept strip of desert covering almost 500km/310mi of Atlantic coast. This spooky park is often shrouded in fog. Its name comes from the numerous shipwrecks lying on the shore. A big draw for visitors is the fascinating Cape fur seal colonies. The most visited colony being at Cape Cross, located south of the park.

This coastal park is home to a variety of marine wildlife. Cape-fur seals are abundant. The most accessible colony is at Cape Cross, outside the park to the south. Up to 100,000 animals can be seen here at any time. Wooden boardwalks make for easy viewing and vantage points. Be prepared for an overpowering stench and high noise levels.

It is not unusual to see the otherwise very shy, but handsome, brown hyena trotting along the beach searching for beached seal carcasses. It is also worth looking out into the sea for a glimpse of the rare Heaviside's dolphins. The mouth of the Uniab River attracts some wildlife coming in from Kaokoland, further inland. This includes oryx, springbok and greater kudu.

The Skeleton Coast is a rewarding birding destination. Marine birds, as well as wetland birds that inhabit the river deltas, are the specialty here. However, accessibility in the park is limited and most species can be found more easily south of the park. Jaegers and skuas are a common sight around the seal colonies and the gracious Cape gannets can be seen diving into the sea to catch their meal. Migratory birds are present from November to April.

Skeleton Coast can be visited throughout the year, but the ideal time is during the warmer months from October to March. These months see a little bit of rain, which keeps the skies clear. Mornings are less foggy and it’s warmer at night than in the winter months. However, wildlife viewing in Etosha NP is a less productive at that time, but this is only relevant if visiting both parks.

It doesn’t rain much and mornings are less foggy
This is the best time for birding as migrants are present
It can get hot in the middle of the day
If you also plan on visiting Etosha NP, wildlife viewing is more productive there from June to October

The Skeleton Coast is characterized by heavy fog and a desert climate tempered by cold sea breezes. Early mornings tend to be very misty, but this often clears by mid-morning. Aside from the fog, it is mostly sunny and precipitation is low.

This is the coolest time of the year. Rainfall is practically absent. These winter months experience heavy fog and strong westerly winds, coming off the ocean and cooling things down.

The Wet season falls in the warmer summer months. The fog and cold sea winds usually prevent searing conditions. Although this is the Wet season, rainfall is very low. Early morning temperatures reach about 17°C/63°F.

November & December – The morning fog and cold sea winds keep average daytime temperatures to a low 24°C/75°F, but they will soar once there is less wind and the sun breaks out. It only rains occasionally.
January, February & March – There is more rainfall during these months, but it’s still quite low. It is mostly dry and sunny. Daytime temperatures average 25°C/77°F, but will be higher when the cold sea winds are less and the fog clears.
April – There is a rapid decrease in precipitation in April. Average afternoon temperatures of around 24°C/75°F are typical.

When entering from the south, the Skeleton Coast NP is located 200km/124mi from the town of Swakopmund and 485km/300mi from Windhoek.

Most people who want a taste of the Skeleton Coast drive up as close as Cape Cross seal colony, which is about 100km/62mi south of the park entrance.

Self-drive visitors, and most organized tours, start their journey via 4x4 in Windhoek. Hosea Kutako International Airport (WDH), your point of entry, is located just 40km/25mi east of Windhoek. An alternative is to arrange a trip which reaches different destinations via chartered flight.

It is also possible to drive to the Skeleton Coast from Etosha in the north of the country. The distance is about 620km/385mi and the driving time about eight hours. 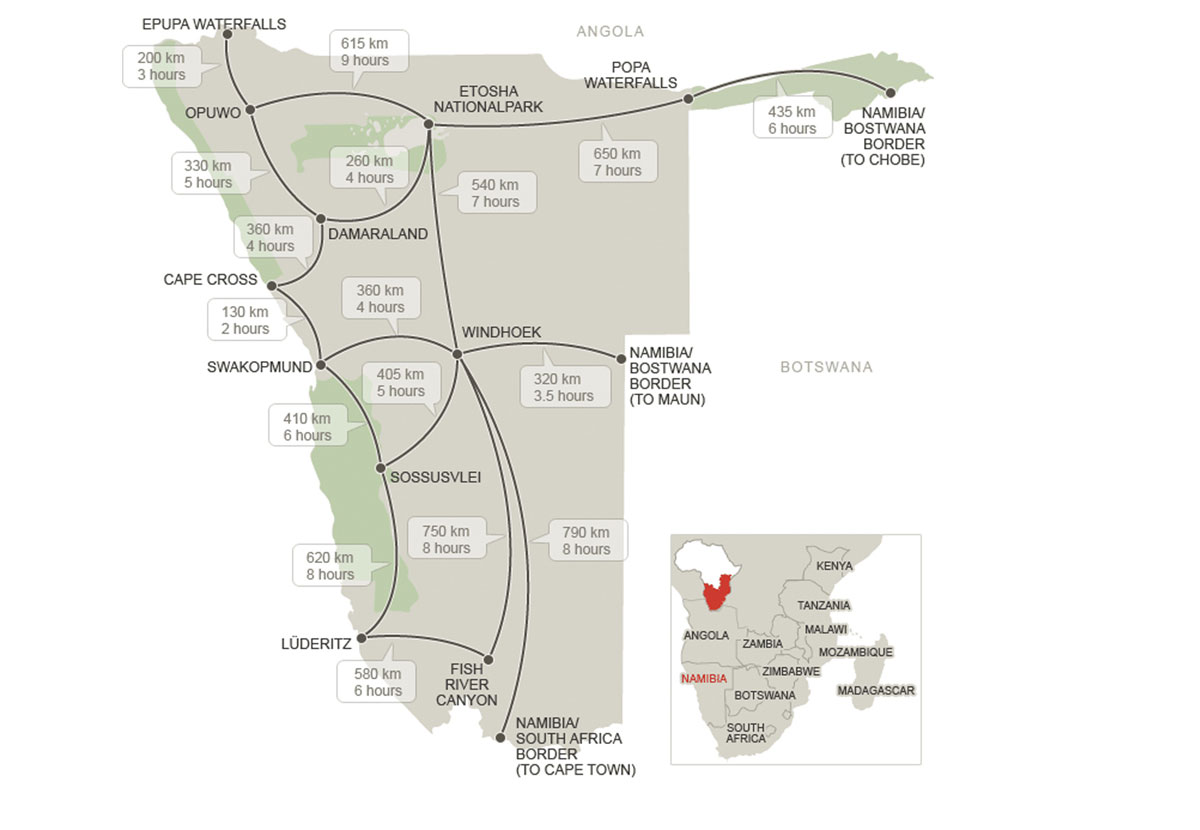