South Africa is one of Africa’s great wildlife destinations. Vast Kruger National Park has an abundance of animals and is one of the continent's iconic attractions. For outdoor adventure, the Blyde River Canyon is the third largest on the planet, and jagged peaks of the Drakensberg mountains punch into the sky. Cape Town hums with an urban beat, and is fringed by white-sandy beaches. 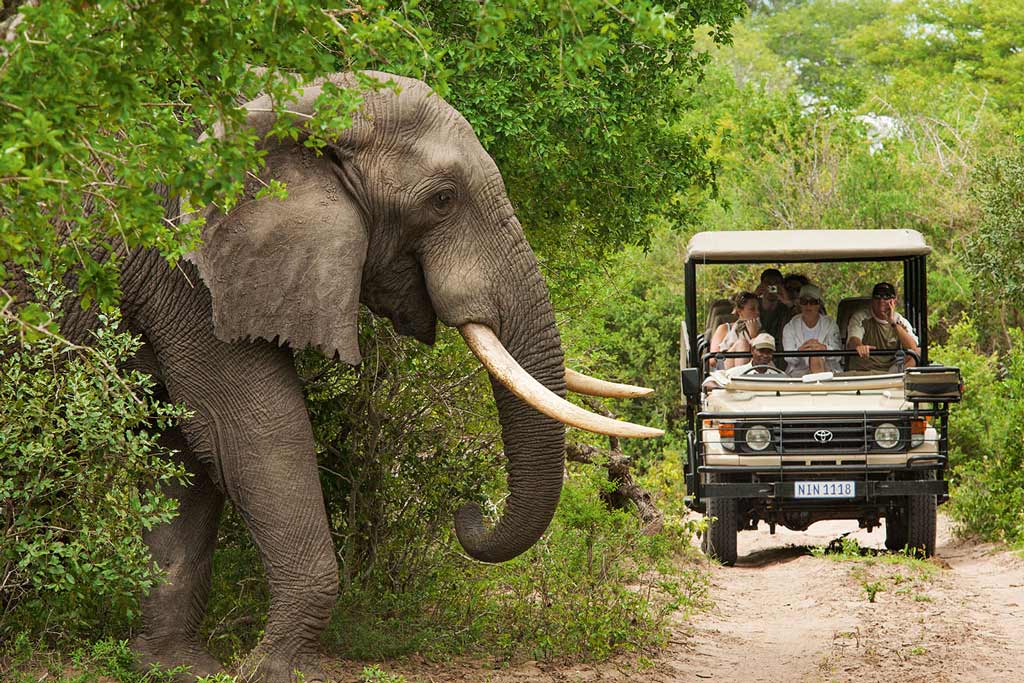 The best time to visit South Africa’s parks is from May to September. This is the Dry season and animals congregate around waterholes and rivers. As this is winter, mornings and nights are cold. May and September are wonderful because it is less cold and, especially in September, the wildlife viewing is excellent.

May to September – Dry Season

Wildlife is easier to spot because there is less vegetation and animals gather around rivers and waterholes
Little to no rain and most days are sunny
Few mosquitos
Low season and parks are not crowded, except for Kruger during school holidays
It gets cold at night and in the mornings

After the first rains, the scenery turns green and all looks fresh
Best time for bird watching, and migratory birds are present
Rains are mostly short afternoon showers and seldom really interfere with your trip
Wildlife viewing can be quite slow since the bush is thicker and wildlife is more difficult to spot
It gets very hot in December, January and February, and parks get crowded during the main school holidays in December

South Africa has a lovely, temperate climate with plenty of sunny, dry days. The main factors influencing conditions are altitude and the surrounding oceans. The east coast is on the Indian Ocean, which has a warm current. The west coast is on the Atlantic Ocean with a cold current. Winter and summer in South Africa occur at opposite times to the corresponding seasons in Europe and North America

Dry Season – May to September – Winter

There is virtually no rainfall during the whole winter and humidity is very low. The Western Cape has winter rainfall and will be cold and wet. Since this isn't a wildlife area, it won't be included in the rest of the descriptions.

May – This month brings the end of summer. Temperatures are relatively cool, typically 10°C/50°F in the morning and 26°C/79°F in the afternoon.
June, July & August – Morning game drives in open vehicles will be cold, so it's advisable to pack warm winter clothing. The average morning temperature is 6°C/42°F. Afternoons will be pleasant with temperatures around 23-25°C/73-77°F.
September – The heat gradually builds to about 28°C/82°F in the afternoons, and the first rains bring relief from very dry conditions. Mornings are pleasant as well, around 12°C/53°F.

The summer rains are usually afternoon storms, and it can be uncomfortably hot on the Indian Ocean coast, with temperatures up to 30°C/86°F and high humidity. At this time, it is unbearably hot in the Kalahari Desert area.

October & November – It gets warmer and starts to rain more often, mostly in the afternoons. Temperatures are between 15°C/59°F in the morning and 28°C/82°F in the afternoon.
December, January & Februay – These are the wettest months, characterized by torrential downpours in the afternoon. Afternoon temperatures are around 29°C/84°F and the humidity is high.
March & April – Rainfall will decrease, and it slowly gets cooler. This continues in April, which has lovely, clear weather. The nights get a bit colder but are still pleasant at about 15°C/59°F. Daytime temperatures are around 28°C/82°F and humidity drops in April.

With good roads and general infrastructure, South Africa is a popular self-drive destination. The circuits described below can be done as a self-drive package or you can book a comparable group or custom tour, in which case all transport will be arranged by your tour operator. 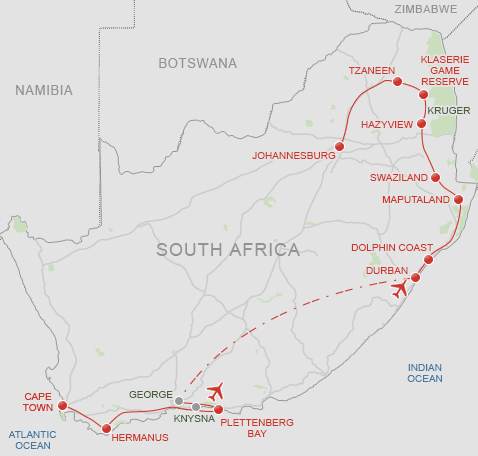 Kruger and Zululand (2 to 3 weeks)

After arriving at Johannesburg’s O.R. Tambo International Airport (JNB), you head east to the Lowveld in the Mpumalanga province where the best wildlife parks are situated.

Kruger National Park (3 to 5 days) is South Africa’s largest and most famous park
MalaMala Game Reserve (2 to 4 days) is one of the private reserves bordering Kruger where the Big Five can be checked off on a single game drive
uMkhuze Game Reserve(2 to 3 days) is excellent for watching animals from a hide
Hluhluwe-Imfolozi Game Reserve (2 to 4 days) is a scenic park with rolling hills, known for its rhino and nyala populations
Durban (1 to 3 days) is a great place to end your trip with some shopping and time on the beach

Cape Town (2 to 4 days) is one of the world’s most attractive cities with great city life and natural beauty
The Garden Route (4 to 8 days) is one of South Africa’s most scenic regions offering whale-watching, hiking, canoeing and relaxation on idyllic beaches
Addo Elephant National Park(2 to 3 days) is home to the Big Five and the elephant-viewing is out of this world
Oudtshoorn (1 to 3 days) is the ostrich capital of South Africa, and the base for a visit to the extensive Cango Caves

After arriving at Johannesburg’s O.R. Tambo International Airport (JNB), you can choose the less-obvious route west of the country. A long drive to Upington brings you to the Kalahari, South Africa’s desert.

Kgalagadi Transfrontier Park (3 to 5 days) is the place to see desert-adapted animals and predators on sand dunes
Augrabies Falls National Park (2 to 3 days) is a stark but scenic park with a magnificent waterfall
Namaqualand (3 to 5 days) is not to be missed from August to September, when the otherwise arid region transforms into a flowering desert
Cape Town (2 to 4 days) is a world class city offering excellent shopping, wining and dining as well as a full range of outdoor activities

O.R. Tambo International Airport (JNB) in Johannesburg is the air transport hub of southern Africa. Onward, travel is mostly by car. Because of excellent roads and facilities in South Africa, some people choose the self-drive option. In most other cases, your local tour operator will arrange pick-up from the airport and further transportation as part of your tour package.

Other international airports are located in Cape Town and Durban, but few flights from Europe or America fly directly to either destination.