Tsavo East and Tsavo West together form one of the world’s largest national parks, covering 4% of Kenya. Tsavo East NP feels wild and undiscovered; its vast open spaces are mesmerizing. The huge, semi-arid wilderness is home to most safari animals, and although wildlife densities aren’t large, spotting animals is always possible here due to the lack of foliage. 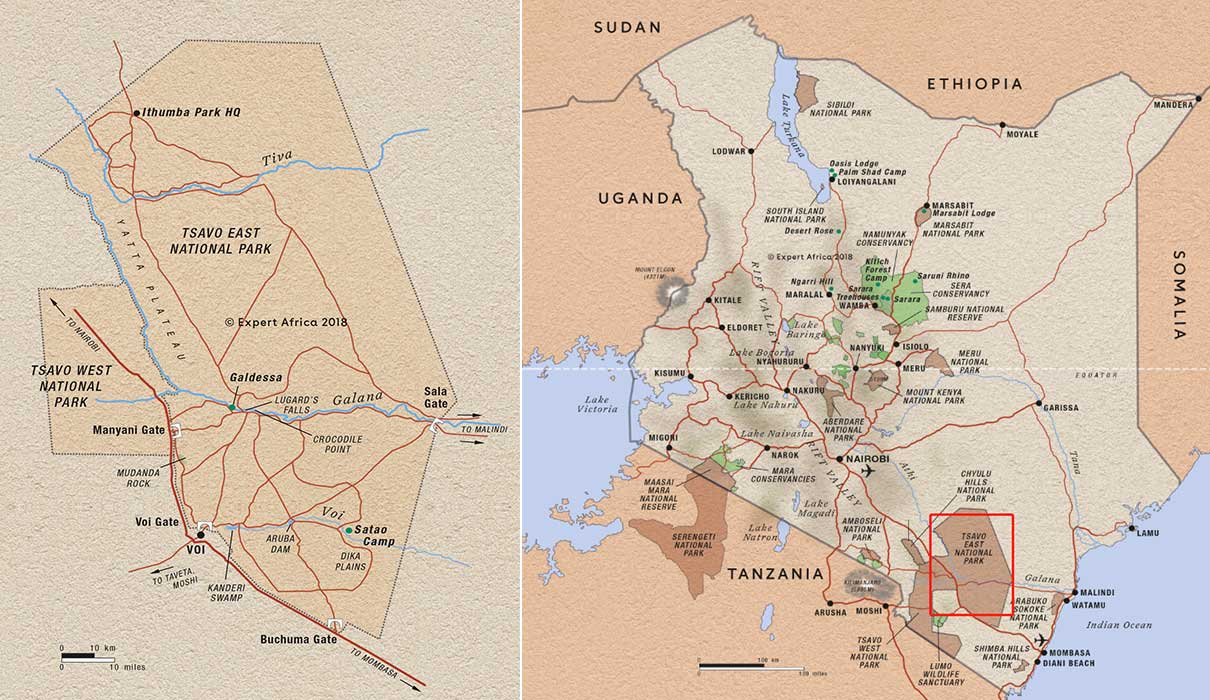 Tsavo East offers great wildlife viewing in pristine wilderness. All of the Big Five are here. Elephants are common, and their red dust coating makes them stand out against the arid environment. Of the big cats, lions are most easily spotted. Buffalo, zebra and plenty of Masai giraffes are some of the other animals you can expect to see.

Tsavo East has a good range of unusual antelope. This is one of the few places to see the fringed-eared oryx. The lesser kudu is very shy, but can sometimes be seen darting off into the bushes. The long-necked gerenuk can be found standing on its hind-legs to reach the sparse foliage of trees and bushes. With some luck, you might spot the critically endangered hirola or Hunter's hartebeest.

Tsavo East has an impressive checklist of over 500 bird species. It has many dry-country specials which are easy to spot, including the magnificent golden-breasted starling, golden pipit and vulturine guineafowl. The park is also the southernmost stronghold for the Somali ostrich. The park’s huge area is a significant wintering ground for migrant species from Europe. Migrant birds are present from November to April.

A trip to Tsavo East is best planned in June to October and January to February, when conditions in the park are favorable for wildlife watching. During the peak of the short rains (November) and the long rains (April and May) conditions can be more challenging. The vegetation at these times is denser and animals spread out, which makes spotting them more difficult

The park is beautiful with lush scenery
April to June is low season so lower rates may apply
Although wildlife viewing is better in the Dry season, there is still plenty of wildlife around
Best time for bird watchers
Roads deteriorate with the increase in rainfall in April and May
Rain can interrupt your planned activities, especially in April

Visitors to Tsavo East can expect a hot, dry climate. The average temperature fluctuates between 31°C/88°F during the day and 20°C/68°F at nighttime. Rainfall peaks in April and November during the long and short rains, respectively. Rain tends to fall as short heavy showers.

The Dry season months are the coolest. Days are full of sunshine and there is very little rain.
June & July – Days are normally sunny. Average afternoon temperatures are around 29°C/84°F.
August & September – The average September temperature is 30°C/86°F, although it does get much hotter. Temperatures during the day escalate prior to the rain.

The ‘short rains’ and the ‘long rains’ are separated by a drier couple of months in January and February. Road conditions are at their worst in April and May.
October, November & December – October usually signals the beginning of the rains. November is one of the wettest months of the year. Rain generally doesn’t last all day, but expect afternoon storms. During daylight hours the average temperature is 32°C/90°F.
January & February – These months see a break between the short and long rains. The exact duration of this dry period is difficult to predict. February is reliably the hottest month – the average in the afternoon is 33°C/91°F with higher peaks.
March, April & May – The long rains usually begin in late March. It hardly ever rains all day, but fleeting afternoon showers should be expected. April receives the most rainfall. Temperatures in the afternoon are about 32°C/90°F.

Tsavo East is in southeast Kenya, 325km/201mi from Nairobi and 250km/ 155mi from Mombasa. You can drive to the reserve from Nairobi, Mombasa or another park depending on your itinerary. There are no scheduled flights to Tsavo East, but there are several airstrips available for chartered flights. The distance from Lake Nakuru NP is 450km/280mi and the driving time is about 7½ hours.

There are no scheduled flights to Tsavo East, but there are several airstrips available for chartered flights.