Tsavo West together with its expansive Tsavo East neighbor form one of the largest national parks in the world. The park is home to the Big Five, but wildlife viewing can be a bit slow at times. There are, however, several landmarks worth visiting including recent lava flows and Mzima Springs with its underwater observation chamber for close-up views of hippos. 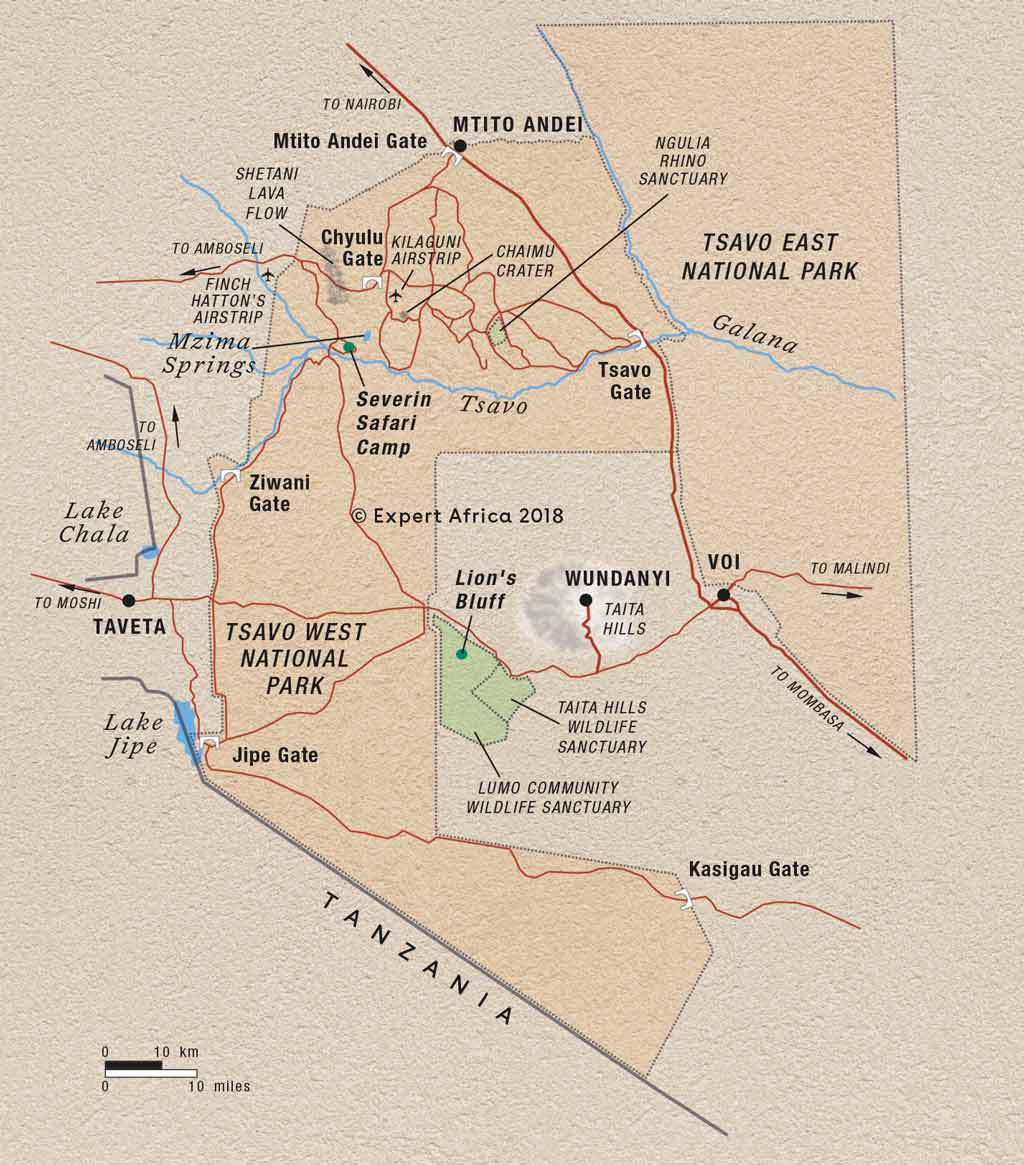 Great wilderness destination
Wide variety of animal with the Big Five present
Excellent birding; many dry-country specials
A chance of seeing rare black rhino in the Ngulia rhino sanctuary
Short walking trail at Mzima Springs
Opportunity to see hippos underwater at Mzima Springs
Views of Kilimanjaro on a clear day
Wildlife densities are rather low
Most tourist facilities are in a small area

Wildlife densities in Tsavo West aren’t that great, but everything is there. There are many elephants, and they are often covered in red dust, giving them an eerie appearance. The park is also known for its maneless lions and big herds of buffalo. Black rhinos have been on the comeback in Tsavo since the ’80s when they were close to being locally extinct.

The park is one of the best places to see the skittish lesser kudu. The rocky terrain is also a good habitat to look for klipspringers, often found in pairs. Antelope that thrive in arid conditions can also be found here, including the very localized fringe-eared oryx and gerenuk. The drive-through rhino sanctuary increases your chances of spotting the elusive black rhino.

Tsavo West’s prolific birdlife features over 400-recorded species. Ngulia Hills, one of the landmarks in the park, is situated along one of the world’s busiest avian migration routes. Bird ringers make an annual pilgrimage here between October and January. Ngulia is the site of Africa’s foremost bird-ringing (tagging to enable individual bird identification) project. More than 100 migrant and resident species have been ringed here – the most prolific being marsh warbler, river warbler, red-backed shrike, thrush nightingale and common whitethroat.

Tsavo West is best visited in the dry months from June to October and January to February. Although the park can be visited any time of year, wildlife viewing during the height of the Wet season (November, April and May) is not recommended. In the wet months animals tend to spread out due to the abundance of water.

Wildlife viewing is best in the dry months
Sunny conditions with almost no rain
Less malaria around in the Dry season
The conditions make for very dry and dusty days
Scenically not as appealing; hazy skies

Beautiful and lush scenery in the park
Lower rates may apply from April to June (low season)
Still reasonable wildlife around
Best time of year for birds, with migratory birds present
Driving conditions can be bad in April and May
Peak rainfall months, especially April, can interfere with most park activities

Tsavo West NP has a climate characterized by hot and dry conditions. During the day, expect temperatures around 29°C/84°F, while 18°C/64°F is typical at night. Cool mornings mean warm clothing is a good idea for early game drives. Rainfall peaks in April and November.

The ‘short rains’ followed by the ‘long rains’ comprise the Wet season. In between these two wetter periods is a drier stretch which falls in the months of January and February.
October, November & December – November is a peak time for rainfall. The rains generally begin in October, although the exact timing changes from year to year. Afternoon storms often sweep through. It averages 30°C/86°F in the daytime, although rain cools things down.
January & February – February is the hottest month: average afternoon temperatures are 32°C/90°F. These months represent a dry spell between the short and long rains. It’s not possible to know exactly when they will begin/finish.
March, April & May – The long rains generally begin in the second half of March. Brief afternoon showers are normal. April is the wettest month, and road conditions often worsen in April and May. Afternoon temperatures climb to around 29°C/84°F.

Tsavo West is situated in the southeast of the country, 232km/144mi from Nairobi and 250km/155mi from Mombasa. Driving to the reserve from Nairobi, Mombasa or another park is a good option depending on your plans.The distance from Lake Nakuru NP is 460km/285mi and the driving time is about eight hours.

There are scheduled flights to Tsavo West from Nairobi, and several other parks including Masai Mara and Amboseli. There are also airstrips available for chartered flights. 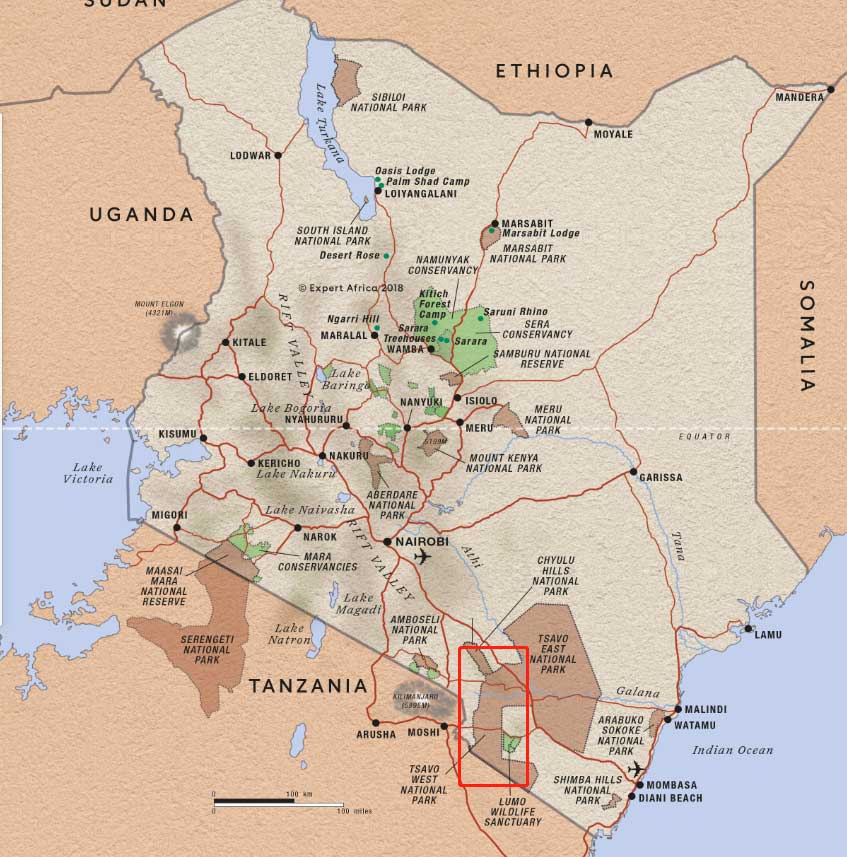