The small (but very scenic) Zambezi National Park is a great destination for a day trip from Victoria Falls since it is located next to it. There are also several lodges overlooking the Zambezi River inside the park offering a real bush experience. Elephant and buffalo are regularly seen, as well as giraffe and zebra. There is a good variety of antelope including waterbuck, impala and sable.

A wide variety of animals – including giraffe, lion and leopard – have access to the park from surrounding areas. Rhino is absent, leopard are rarely seen and lion numbers are increasing. Elephant and buffalo are common on the banks of the Zambezi River. The river is teeming with hippo and crocodile while the park has a good number of resident antelopes, including waterbuck and bushbuck.

Wild dog occur in the park and the best time to see them is between May and August, which is their denning season. The majestic sable antelope can sometimes by spotted in the south of the park, as can eland. Chacma baboon can be found sitting in palm trees next to the river, and keep a look out for the colonies of banded mongoose which scurry around the undergrowth.

With more than 400 species recorded, this little park is of particular interest to birders. The riverine habitat is home to many specials, including the African finfoot, collared palm-thrush and Pel's fishing owl. African skimmers can be found on the sandbanks or skimming the water in the Wet season. Migratory birds are present from November to April.

The best time for watching wildlife in Zambezi National Park is from June to September, the middle and end of the Dry season. The Zambezi River becomes a place for animals to congregate and, during this dry time, the bush thins out making it easier to see them. Most people visiting the park will be staying at Victoria Falls, which is at its best from May to September.

Wildlife is more easily seen as the bush thins out and animals gather around the river
May to September is the best time to visit Victoria Falls
Days are bright and filled with sunshine
The chances of contracting malaria are slim since there are fewer mosquitos
Humidity is at its low point, making the heat less bothersome (except in October)
Victoria Falls gets crowded
The air is dusty
Warm clothing is recommended for early morning game drives, which can be cold

The landscape is lush and green
There are fewer tourists in the town of Victoria Falls, and rates might be lower
Newborn animals are present
With the appearance of migratory birds, bird watching is at its best
Wildlife viewing is not as good as during the Dry season
From October to December, the flow of the Zambezi River is at its lowest and Victoria Falls might be reduced to a trickle
Some roads become muddy and hard to drive on

Zambezi enjoys warm to hot temperatures. The warmest time occurs from September to March, and the coldest is May to August. April to October (the Dry season) is full of sunny, clear weather. The Wet season is from November to March and is characterized by afternoon showers with sunshine following. Likewise, it can also come in the form of successive days of drizzle. The winter and summer seasons are experienced at opposite times than in Europe and North America, going hand-in-hand with the Dry and Wet seasons

April – The temperatures cool down, particularly during the nighttime. Rains occur less and less often.
May, June, July & August – These are the coldest winter months Daytime temperatures are around 27°C/81°F, but at night and in the early morning the temperature cools to around 8°C/46°F. Be sure to bring winter clothing for the cold morning game drives.
September & October – The drought finally ends with the first rains by late October. It gets hot during the day, with temperatures reaching over 33°C/91°F. October is the hottest month with an average daytime temperature of 35°C/95°F. It can feel uncomfortably hot once the rains have started.

November – It starts raining more heavily, although it won’t rain every day. It can still get uncomfortably hot because of the increased humidity and high average daytime temperatures, usually hovering around 33°C/91°F.
December, January & February – These months are the wettest, although it rarely rains the whole day. Afternoon showers are common and are often followed by hours of sunshine. Alternately it can drizzle for a few days in a row. Daytime temperatures average 30°C/86°F, while night and early morning average 19°C/66°F.
March – Day and night temperatures average between 30°C/86°F and 18°C/64°F as the Wet season comes to its end.

Zambezi National Park, on the southern bank of the Zambezi River, is located less than 5km/3mi on a tarred road from the town of Victoria Falls. Victoria Falls boasts an international airport with services from Harare and many regional and international destinations.
Your main point of entry into Zimbabwe is Victoria Falls Airport (VFA) and a trip to Zambezi National Park is a great way to spend a day. Your transportation will normally be provided by your local tour operator as part of your tour package. This usually includes pick-up from the airport or hotel. Even if Zambezi NP isn’t part of your safari package, a daytrip is easily arranged from any hotel in town.
If you’re doing a road trip in the region, you might be coming from the popular Chobe NP in Botswana, which is located 80km/49mi west of Victoria Falls. The drive takes just over an hour. 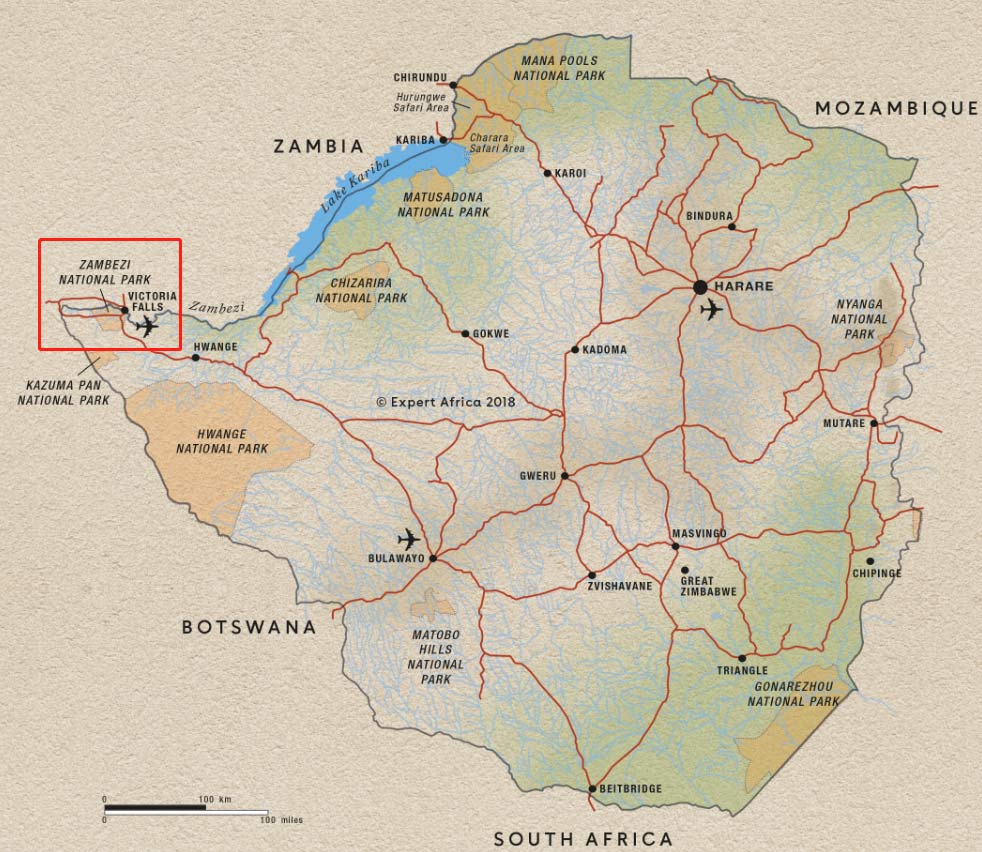