The Zambezi Region (formerly Caprivi Strip) is a narrow strip of land in northeastern Namibia bordering Botswana. There are three off-the-beaten-track national parks here: Bwabwata, Nkasa Rupara and Mudumu. Animals cross freely from Botswana and there is wildlife not common in the rest of Namibia, including buffalo, hippo and crocodiles. This is mainly a 4x4 self-drive destination for the adventurous traveler. 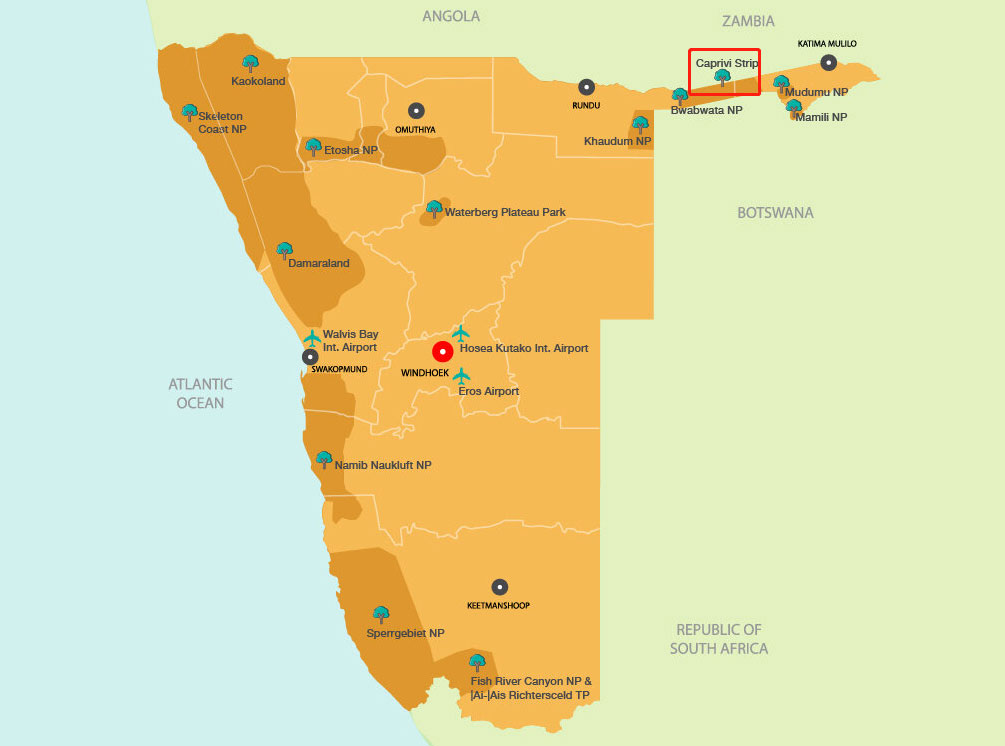 Although sometimes harder to spot than in the drier parks of Namibia, there is a great deal of wildlife in the Zambezi Region (formerly Caprivi Strip). Animals are attracted to the lush vegetation and permanent water. Buffalo and elephant are plentiful and there are lots of predators. There are no rhinos, but other animals to look out for include giraffe, zebra and wildebeest.

The Zambezi Region has some magnificent permanent marshes and is flooded part of the year. This creates a perfect habitat for water-loving animals, which are scarce in the rest of the country. Hippos and crocodiles are abundant in the rivers and antelope such as waterbuck, red lechwe and the rare semi-aquatic sitatunga thrive in the marshes. There is plenty of food for resident lions and wild dogs often roam this area as well.

The Zambezi Region (formerly Caprivi Strip) is an excellent bird-watching destination and has over 450 species recorded. It supports many birds not found elsewhere in the country. Most of the Okavango specials can be seen here, including slaty egret, racket-tailed roller and wattled crane. Permanent water in the area makes it a popular stopover for many migrants from Eurasia and elsewhere in Africa, from November to April. A variety of waders is abundant throughout the year.

The Zambezi Region (formerly Caprivi Strip) can be visited throughout the year, but the best time for wildlife viewing is in the dry winter months from June to September. At this time water is scarce and animals gather around the few remaining water sources. The vegetation is also thinner during these months, which makes it easier to spot wildlife.

Best time for wildlife viewing
Warm weather, but not oppressively hot (except for October)
The area never gets busy
It is very dry and dusty and the sky can be hazy

The Zambezi Region (formerly Caprivi Strip) has a hot climate. Rain usually falls in the form of heavy thunderstorms. There is a Wet season, which coincides with the summer months of November to April. During the dry winter months, from May to October, there is virtually no rain at all and it gets very cold in the morning.

These are the coolest months and there is almost no rain at all. It gets drier as the winter progresses.

May, June, July & August – It is usually sunny and totally dry. These are the coolest months and the average afternoon temperature is 27°C/80°F. It is cold in the early morning, around 8°C/47°F. Warm clothing for early morning wildlife drives is necessary.
September & October – Temperatures are increasing. October is the hottest month with afternoon temperatures of 35°C/95°F and much higher peaks. Early mornings are less cold, around 15°C/59°F. The rains usually start towards the end of October or early November.

The Wet season falls in the hot summer months but rainfall isn’t very high. Afternoon thunderstorms can be expected on some days. It is mostly sunny and hot. Early mornings are mild.

November & December – The rains usually start late October or early November. It is still mostly dry, but you can expect the occasional thundershower which brings relief from the long, dry winter. Afternoon temperatures are around 32°C/90°F.
January, February & March – January and February are the wettest months. Afternoon thunderstorms are common, but it is mostly sunny during the day. It usually cools down after rain and average daytime temperatures are around 31°C/88°F.
April – Rain decreases rapidly in April and there are less and less days with precipitation. Temperatures start to drop slowly.

The Zambezi Region (formerly Caprivi Strip) is located 900km/560mi from Windhoek by car. The area is a panhandle in northeastern Namibia and is roughly 400km/250mi from east to west and 32-96km/20-60mi from south to north. The eastern most point is where the borders of Namibia, Zimbabwe, Botswana and Zambia intersect.

The main point of entry into Namibia is Hosea Kutako International Airport (WDH) located 40km/25mi east of Windhoek. Visitors will usually start their trip by 4x4 in Windhoek. Alternatively, there are fly-in trips that take you between different parks by charter flight.