In Zambia, you’ll be looked after on safari by some of the best guides in Africa. They’ll happily share everything they know about the local wildlife and landscape, while safely leading you on game drives, walking safaris, even canoeing safaris along the Zambezi River. 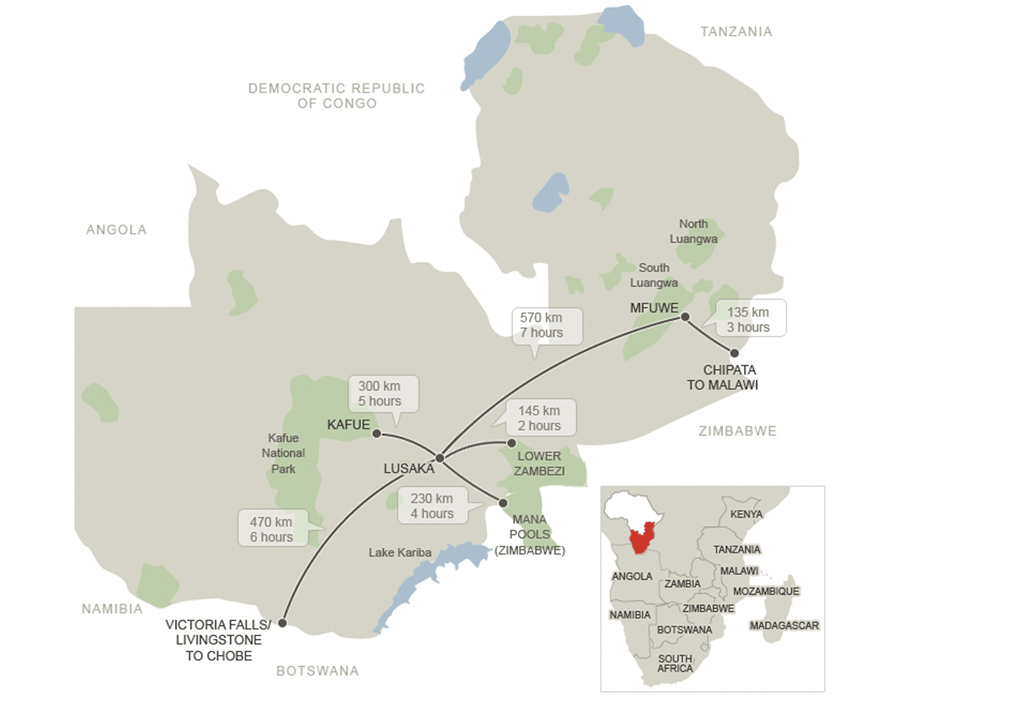 You have an excellent chance of seeing lots of wildlife in Zambia during the Dry season (May to October) when the animals gather around rivers and waterholes. This will fit in nicely with a visit to Victoria Falls, which you can see most clearly from June to September. A Wet season safari (November to April) is much more challenging, as most parks and camps shut down because of the heavy rain. The Mfuwe section of South Luangwa NP is an exception: you can drive its all-weather roads year-round.

It’s much easier for you to spot animals because there’s less vegetation and they gather around waterholes and rivers
There’s hardly any rain, the sky is clear, and there are fewer mosquitoes
Although it’s high season, most of the parks won’t be crowded except for Victoria Falls
June through September is the best time to see Victoria Falls – the water is mid-to-low, so there’s little spray to block the view
October can get very hot in lower-altitude parks like South Luangwa and Lower Zambezi
Morning game drives in winter are really cold, so bring warm clothing during June, July and August

The landscape is greener; plus it’s low season, which means lower rates
You can see newborn animals
This is the best time for watching birdlife, including migratory birds
The rain mostly falls as short showers in the late afternoon
Some camps in South Luangwa stay open; they offer boat trips and are more flexible about you bringing your kids
The animals are harder to find because the bush is thicker and they no longer rely on rivers and waterholes to drink
Dirt roads become impassable due to heavy rain and most parks and camps close down – but Zambia’s most-popular park, South Luangwa, remains open
From October to December, Victoria Falls might just be a small stream on the Zambian side

The Dry season in Zambia is a lovely time to visit – it’s divided into a cooler period (May to August) and a hotter one (September and October). Zambia is right in the tropics and gets lots of rain in the Wet season (November to April). If you arrive then, you’ll find that many areas are cut off, and that most camps in Kafue, Lower Zambezi and the more remote parks have shut down. Not the Mfuwe section of South Luangwa, however, which you can visit at any time of year. The further north you go, the earlier the rains come and the later they leave, while the eastern and higher areas get more drenched than the western and lowland areas.

In winter, there’s hardly any rain and low humidity. Thirsty animals crowd around the waterholes and rivers to drink.

May – The end of summer, when temperatures are pretty cool: typically 12°C/52°F in the morning and 25°C/77°F in the afternoon. Nighttime temperatures also start to drop and the rains are almost gone.
June, July & August – The average morning temperature is a chilly 10°C/50°F, so bring warm winter clothing for those early game drives in open vehicles. Afternoons are more pleasant, with temperatures around 23°C/73°F, although lower-altitude parks like South Luangwa and Lower Zambezi will be hotter.
September & October – The heat slowly builds and the first rains bring relief from very dry conditions. Daytime temperatures are around 29°C/84°F in September and 31°C/88°F in October, which is the hottest month. In the lower-lying parks, temperatures often peak at over 40°C/104°F, and the rising humidity can make you uncomfortably hot.

The best way to visit the parks in Zambia is by small aircraft. You will arrive in Lusaka’s Kenneth Kaunda International Airport (LUN) or Livingstone Airport (LVI), via Johannesburg, before flying on to your next destination. Zambia is all about in-depth safaris. It is not unusual to spend your whole holiday in one or two parks getting to know them thoroughly. Aside from game drives, walking and boat safaris are usually part of the package. 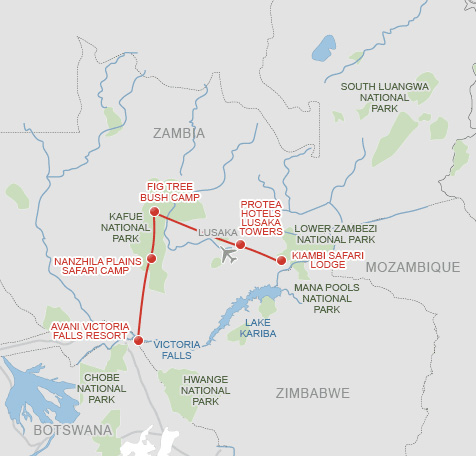 Victoria Falls (1 to 3 days) is Africa’s most spectacular waterfall. Aside from seeing the falls from various viewpoints, you can take a helicopter flight to see this natural wonder from a different perspective. There are lots of other activities to keep you busy, including boat trips and white-water rafting.
Kafue National Park (3 to 5 days) is one of the largest parks in Africa and known for great leopard sightings. In general, animals tend to be a bit skittish here, but there is a good variety of antelope species and the park offers great wilderness appeal.
South Luangwa National Park (3 to 6 days) is Zambia’s premier park, famous for its walking safaris. It is home to a wide variety of animals and is great for elephant viewing. Night drives are especially rewarding, giving a good chance to see some nocturnal species such as porcupine and bushbaby. Witnessing a pride of lion hunting at night is particularly exciting.
Lower Zambezi National Park (3 to 5 days) is located on the northern bank of the mighty Zambezi River. Four of the Big Five are easily spotted (rhino is absent). While game drives are most productive for seeing lots of animals, canoeing is a highlight here and seeing animals from this vantage point is truly spectacular.

Any one of these three popular parks can be visited in isolation, or in combination with Victoria Falls for a longer period. In this case, you can book different accommodation throughout the park and do some mobile camping as well.

Zambia's main airport is Kenneth Kaunda International Airport (LUN), located 14km/9mi from the capital, Lusaka. From Lusaka, you can fly or drive between reserves. If your safari is combined with a visit to Victoria Falls, you will most likely fly in or out of Livingstone Airport (LVI), just outside of Livingstone and close to the falls. In most cases, your local tour operator will arrange pick-up from the airport and further transportation as part of your safari package.