Because of the political situation in Zimbabwe, tourists are few and prices are competitive, but the main parks are still cared for and well worth visiting. Hwange is not to be missed, and Mana Pools offers great canoeing safaris on the Zambezi.

The best time to visit Zimbabwe is from May to September. It can, however, be visited at any time of the year. The best wildlife viewing time is in the Dry season, May to October, when animals congregate around the rivers and waterholes. This is especially true in Hwange where the artificially pumped waterholes attract many animals, including big herds of elephant. The best time to see Victoria Falls is also from May through September.

Vegetation is less and animals concentrate around waterholes and rivers, making wildlife easier to spot
Virtually no rain, clear blue skies and lots of sunshine; there are fewer mosquitoes
Although it is high season, the parks won't be crowded, except for Victoria Falls
Victoria Falls is most spectacular from May through September when the water is mid-to-low, and the spray doesn't block the view to the falls
October can get very hot in the low-lying areas, with temperatures well above 32°C/90°F
It gets cold at night and in the mornings; it's recommended to pack warm winter clothing for morning game drives in open vehicles during the months of June, July and August
From March to May the flow of the Zambezi river is at its peak, but the massive clouds of spray will block the view of Victoria Falls

The scenery is greener, and it's low season resulting in lower rates
Many animals give birth in the Wet season, so this is the best time to see newborn animals
Bird watching is at its best, many birds are in their breeding plumage and migratory birds are present
Rains are mostly short afternoon showers and seldom have a negative impact on your safari – but the rains can continue for days
Wildlife viewing is more difficult since there is more vegetation and animals no longer rely on water holes

The humidity combined with the higher temperatures in the low-lying parks can make it feel uncomfortably hot
From October to December, the flow of the Zambezi river is at its lowest and Victoria Falls isn't at its best

Zimbabwe enjoys a lovely, temperate climate. The central highveld plateau has temperatures coming up to 28°C/82°F. Lower-lying parks such as Hwange and Zambezi NP are warmer year-round and temperatures can reach 31°C/88°F. Mana Pools, Matusadona and Gonarezhou are even lower and get hot, with temperatures soaring to 35°C/95°. The Eastern highlands are much colder and receive significantly more rain.

During the Wet season, from November to March, rains usually fall in heavy afternoon showers, but they can sometimes be lighter and continuous for a couple of days. The Dry season, from April to October, is pretty much rain- free and colder. Nights and mornings can be as cold as 5°C/41°F to freezing, but daytime temperatures are still pleasant with a great deal of sunshine. Zimbabwe experiences winter and summer in opposite times as Europe and North America and they correspond to the Dry and Wet season.

During the Dry season, there is virtually no rainfall, and humidity is low. Wildlife will concentrate around waterholes and rivers when other water sources dry up.
April, May – This is the end of summer. Temperatures are relatively cool, typically around 10°C/50°F in the morning and 28°C/82°F in the afternoon. The nighttime temperatures start to drop. By May, the rain is almost gone.
June, July & August – Be sure to pack warm winter clothes because morning game drives in open vehicles will be cold. The average morning temperature is 6°C/43°F. Afternoons will be more pleasant with temperatures around 25°C/77°F. Parks at lower altitude will be warmer.
September, October – The heat gradually builds and reaches its annual peak in October. The first rains can fall by late October, bringing relief from very dry conditions. The lower lying areas get very hot in October with temperatures of 32°C/90°F and well above. The increasing humidity can make it feel uncomfortably hot.

November – This month is unpredictable, and it might start raining some afternoons. Temperatures are between 18°C/64°F in the morning and 32°C/90°F in the afternoon. Parks in the central highveld plateau will be colder, and parks at lower altitude will be considerably warmer. In the low-lying parks, temperatures can frequently peak at 40°C/104°F or higher throughout the Wet season.
December, January, February & March – These are the wettest months, characterized by torrential downpours in the afternoon and sometimes continuous rains for a couple of days. Nights and mornings are warm at around 18°C/64°F. Afternoon temperatures are around 30°C/86°F and the humidity is high, making it feel hotter. 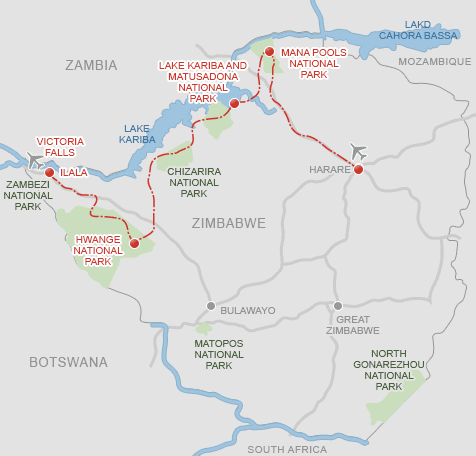 Victoria Falls (1 to 2 days) is Africa’s most spectacular waterfall. In addition to viewing the waterfall, activities are plentiful, including boat trips, canoeing and helicopter flights. Going to a traditional dance show is highly recommended as well.
Zambezi National Park (0.5 day) is a small park and can easily be visited on a day trip from Victoria Falls. Elephant and buffalo are plentiful and there is a good variety of antelope, including the majestic sable.
Hwange National Park (2 to 4 days) is only a short drive away. Wildlife viewing tends to be good here, especially at the end of the Dry season when you’ll encounter hundreds of elephant congregating around waterholes.
Mana Pools National Park (2 to 4 days), in the north of the country on the Zambezi River, is highly recommended for the adventurous traveler. Here the focus lies on walking and canoeing instead of the more conventional game drives. Watching wildlife from a canoe gives a different perspective to a safari and is not for the faint-hearted.
Matobo National Park (1 to 2 days) can be done as an alternative to Mana Pools as it is located in the south of the country. This park is famous for its dramatic rock landscape and San rock paintings.

Popular add-ons:
Great Zimbabwe, a ruined city that was once the capital and now holds the remains of one of Africa’s greatest civilizations
Lake Kariba for boating and fishing

Few airlines fly directly to Zimbabwe. Most people fly to Johannesburg and from there connect to Harare, Victoria Falls or Bulawayo on the same day. Most tourists fly to Victoria Falls Airport (VFA), located 18km/11mi south of the town of Victoria Falls, and continue from there by vehicle or charter planes. Hwange, Zimbabwe's most popular park, is situated within driving distance of Victoria Falls. However you choose to travel, in most cases, your local tour operator will arrange pick-up from the airport and further transportation as part of your safari package.